I am almost guaranteed to get at least one query every year about a large beetle with enormous eyes. The “eyed elaters” in the genus Alaus, family Elateridae, certainly are a curiosity, and thankfully harmless. This past week my wife and I were fortunate enough to encounter two specimens of the Eyed Click Beetle, Alaus oculatus, while we were in Georgia, just outside of Atlanta. 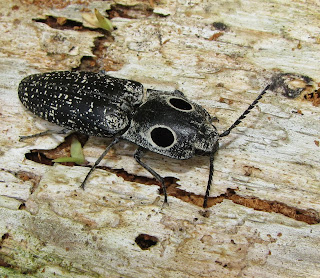 There are currently six recognized North American species in the genus Alaus, five of which are discussed below. They are collectively found over most of the U.S. and southern Canada. All are large insects, active during the day or at dusk, and are strong fliers. Ironically, they seem far less ambulatory on their six legs. They are usually seen on logs, stumps, or tree trunks where they are surprisingly cryptic given their large size and striking eyespots. A motionless eyed elater is often nearly invisible. 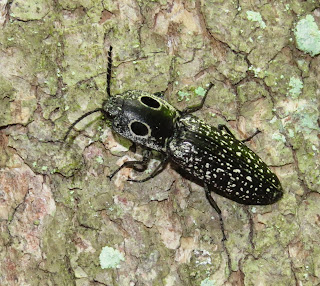 Alaus oculatus varies from 24-44 millimeters in length, is bullet-shaped, and mottled black and white. This is the species most commonly encountered species in eastern North America, found from Quebec and Ontario south and west to Texas, the Dakotas, and eastern Colorado. They are sometimes attracted to aromatic solvents and fresh paint, scents that are also produced by freshly cut or downed trees.

Larvae of all Alaus species live in decaying wood where they prey on the larvae and pupae of other kinds of beetles. These giant “wireworms” have strong jaws and should be handled carefully, if at all. 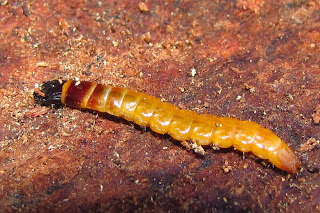 The “Blind Click Beetle,” A. myops (not illustrated), has much smaller eyespots than its cousin, and is mostly slate gray in color. Adults measure 19-42 millimeters. This is insect is most common in southern pine forests, but ranges from Quebec to Florida and west to Manitoba, Minnesota, Kansas, and Texas. Both adults and larvae are predatory and are found under loose bark on pine trees, logs, and stumps.

The western half of the continent has its own set of eyed elater species, including the Western Eyed Click Beetle, A. melanops. Its geographic distribution includes British Columbia, Oregon, Colorado, California, and New Mexico. Adults measure 20-35 millimeters. They resemble the Blind Click Beetle, but the ranges of the two species do not overlap. 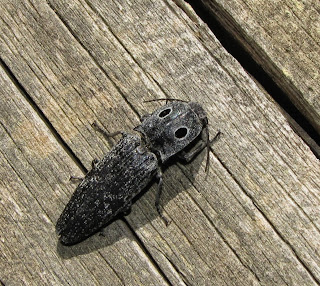 Perhaps the most spectacular eyed elaters reside in the southwest U.S. The Zuni Click Beetle, A. zunianus, appears confined to Arizona. Note the eyespots are rounder than in other Alaus species, and the mottling is ivory or beige rather than stark white in many specimens. These are hefty insects, more robust than the others discussed so far. 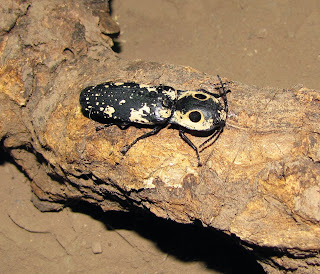 The Texas Click Beetle, A. lusciosus, is nearly identical to the Zuni Click Beetle, but it ranges from Texas to southern Colorado, Oklahoma, and Kansas.

Click beetles in general get their name from a peculiar behavior made possible by their body structure. Elaterids have a spine on the underside of the thorax that snaps into a groove on their “chest.” The beetles are so smooth, frequently covered in soft hairs of slick scales, that predators have a hard time grabbing the insects without the slippery, torpedo-shaped beetles escaping. However, should a bird or other animal manage to get a grip, the beetle snaps that spine into the groove with such force as to eject it from the predator’s grasp, or startle the attacker into dropping it. 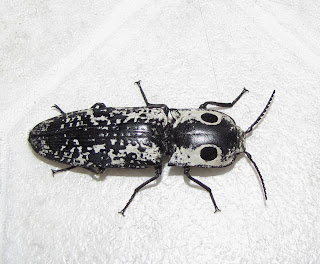 It was formerly assumed that the clicking mechanism was used by the beetle to right itself should it land on its back….and indeed, the beetles do this as well. Smaller click beetles can vault themselves up to ten inches into the air in attempts to land on their feet. Oddly, the big eyed elaters can barely pop up an inch or two.

Keep an eye out for eyed elaters in your own region, especially during late spring and in June and July. At least some adults may overwinter in cavities in rotten wood, where they may be encountered at any time of year.