We tend to think of butterflies as symbolic of everything delicate and dainty, but not so the actual insect. The Black Swallowtail, Papilio polyxenes, a common species throughout the summer, is a prime example. At all life stages, this insect is the epitome of durability. 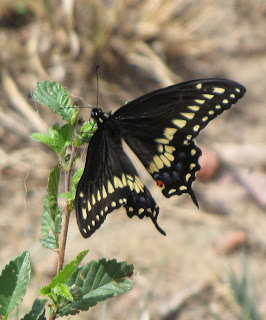 I was prompted to write about this species by an encounter with a female Black Swallowtail at Sinton Pond Open Space here in Colorado Springs on June 5. She was flitting among a stand of Poison Hemlock, Conium maculatum. While this plant is, as the name implies, highly toxic to people, it is one of the host plants for the caterpillar of the Black Swallowtail. Indeed, many members of the parsley family are palatable to the larvae. 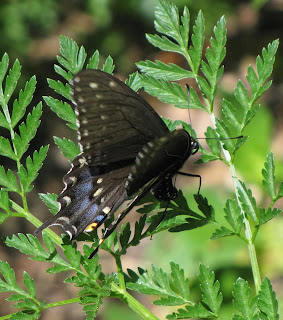 I somehow managed to capture the female in the act of ovipositing, then found the egg after she left. She determines the suitability of the plant by “tasting” it with her tarsal segments (feet), scratching the plant into liberating chemical compounds that the butterfly recognizes as a host plant. 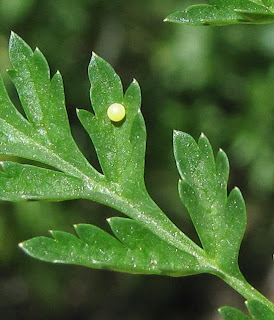 The egg is a hard-shelled object impermeable to moisture loss, and insulating the embryonic larva within from the elements. The caterpillar chews its way out of the egg in about 4-9 days, consuming the empty shell so as to leave no trace for birds and other predators to clue in on. It then turns its attention to munching on the host plant. 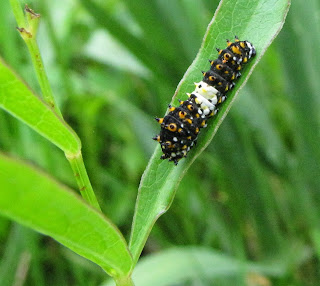 When they are small, Black Swallowtail larvae mimic bird droppings in color and texture, being black with a white “saddle” marking. It is easy to dismiss the little caterpillar as an inanimate object on the dill, fennel, parsley, or carrot plants in your garden. That white mark is an expression of uric acid deposits in the cuticle of the larva, which may act as antioxidants in disarming the phototoxic chemicals that its host plants use in their own defense. 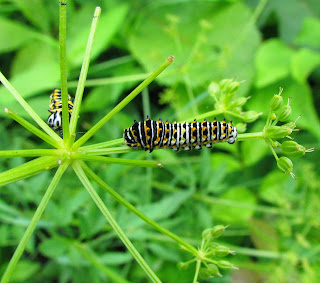 After three molts, the larva suddenly becomes a dapper, zebra-striped animal that is hard to miss, especially considering the caterpillars get pretty large and are generally feeding on plants that have very slender foliage. 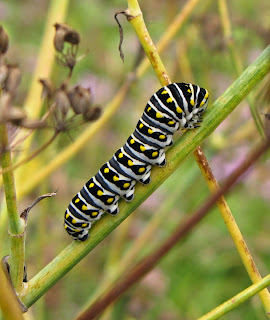 At this point, the Black Swallowtail caterpillar has a number of defenses at its disposal for thwarting predators. First, it uses its jaws to hurl its fecal pellets, thereby eliminating trace evidence (and aromatic clues) of its presence. Should it be directly antagonized, it will evert a gland called an osmeterium from a fold in the thorax. This gland is bright orange and resembles the forked tongue of a reptile. Further, the gland exudes a substance that effectively repels ants and potentially other insect predators, especially if the fluid can be smeared directly on an attacker. One of the components of this awful cocktail is isobutyric acid. That’s right, it smells like rancid butter. 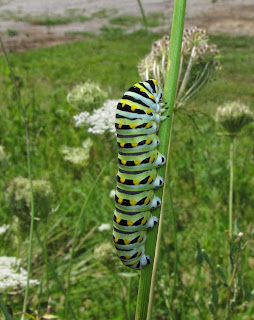 The larval stage can last anywhere from 10-30 days, after which the caterpillar molts for a fifth time, into the pupa stage.

When preparing to enter the pupa stage, the caterpillar spins a silken “safety belt” around itself, such that it is leaning back off the stem, twig, or other surface to which it is anchored at the rear by a button of silk and hooklike appendages on the tip of its abdomen. The chrysalis looks more like a shard of dead wood or other plant material than anything animal, and is easily overlooked. The pupa is the overwintering stage for the Black Swallowtail, but in summer generations, this stage lasts from 9-18 days. 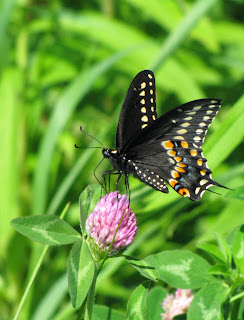 Adult male butterflies emerge two or three days ahead of females, and they immediately try to establish a territory. This is often at the summit of a ridge or butte, and this behavior is known as “hilltopping.”. Competition is keen, however, and males will engage in aerial combat for possession of prime real estate. They collide violently enough to be audible to human observers, if the butterflies don’t chase you off, too.

The butterflies quickly become battered, their “tails” lost on the wind, but the wear on their wings hardly slows them down. 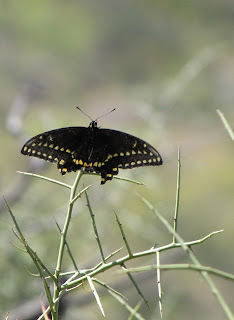 Females ascend the peaks where they are intercepted by the males. Once mated, a female begins the life cycle anew. Females are much darker than the males, and mimic the distasteful Pipevine Swallowtail where the range of both species overlap.

The Black Swallowtail ranges throughout North America east of the Rocky Mountains, and in Arizona and southern California as well. Northerly populations have up to two generations annually, with at least three generations in the south. You can almost be guaranteed to see them simply by planting carrots, parsnips, celery, fennel, dill, or any related herb/vegetable in your garden. 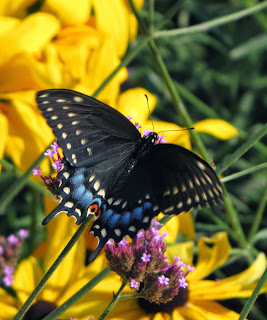