Grasshopper species diversity in the southwest U.S. presents enough of a challenge for the amateur naturalist, but then you have the Lakin Grasshopper, Melanoplus lakinus, that can apparently pass for several hundred species all by itself. That's an exaggeration, of course, but there is such great variability in the color, pattern, and wing length of this species that it is mind-boggling. 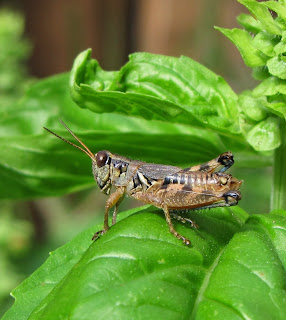 Lakin Grasshopper is often overwhelmingly abundant in disturbed habitats such as vacant lots and weedy fields and rangeland filled with its favorite host plants, members of the goosefoot family Chenopodiaceae. This includes Russianthistle ("tumbleweed"), kochia, and native saltbush (Atriplex spp.). It will also feed on various forbs and grasses such as lambsquarters, western wheatgrass, and downy brome. Despite high population densities in some years, it is seldom a crop pest. 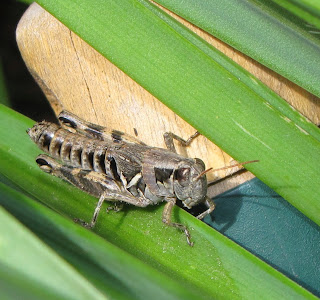 This is a grasshopper of the Rockies and Great Plains, ranging from South Dakota and southern Minnesota south through western Iowa, most of Kansas, western Oklahoma, the west half of Texas, plus Nebraska, Colorado, New Mexico, and the eastern two-thirds of Wyoming, Utah, and Arizona. It also occurs deep into central Mexico. 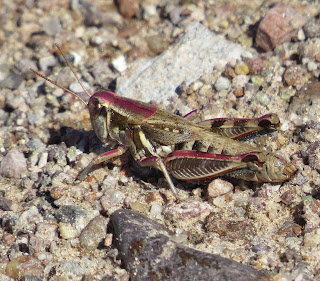 Melanoplus lakinus is a pretty "average" grasshopper. Adult males measure about 22 millimeters in body length, females 30 millimeters. Most specimens are short-winged as adults, but some are fully-winged. The overall color varies greatly from brownish or gray to green or even red. The tibia ("shin") segment of the hind leg is usually blue, armed with spines that are black or at least black-tipped. The inner surface of the hind femur ("thigh") is often reddish in part, especially along the bottom edge where the tibia folds into it. The top surface of the femur is most often marked with pronounced dark bands. 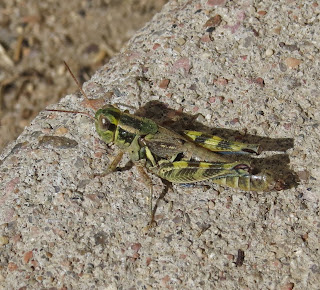 Dark bands on the abdomen, especially near the base, are helpful in recognizing the species in the field, but ultimately one has to examine the external genitalia of the male to confirm identification.

Ok, so how do you even tell apart the different genders? Below is an image that shows the male and female side-by-side, from the rear. The male is on the right. The female is on the left, but her abdomen is twisted to repel his advances, or accept his overtures, I'm honestly not sure which because I did not stick around long enough to see the outcome. 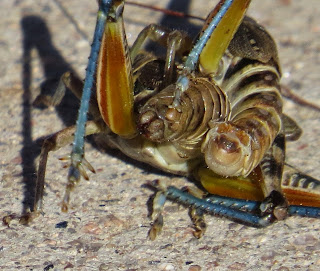 The male's parts are pretty complicated, but you want to look at the shape of each "cercus," paired tail-like appendages. In the example below, we see that the cercus of M. lakinus is shaped something like a Hershey's candy kiss: broad at the base and tapered toward the tip. Next, take a look at the shape of the subgenital plate. It is best to view it directly from the rear, like in the image above. We can see it has a low, blunt tooth right in the middle. The supra-anal plate also offers species-specific details, but they are more difficult to discern, especially in images. 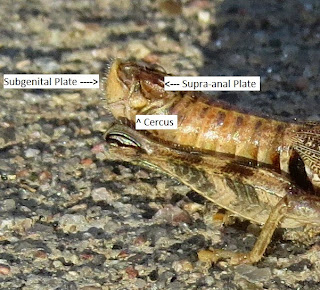 When two grasshoppers do get together, it looks like this: 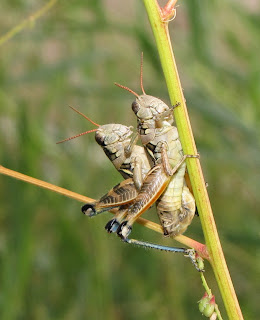 Pretty kinky, almost literally! Mated females deposit clusters of eggs ("pods") in the soil by telescoping their abdomen as deep as it can reach. The eggs are held together by a kind of foamy secretion that hardens to protect the mass from environmental extremes. The eggs hatch in late May or early June, on average, the following year. In Arizona, where summer monsoons trigger hatching, emergence is usually in early July. The nymphs pass through five instars (an instar is the interval between molts), reaching adulthood in about a month. 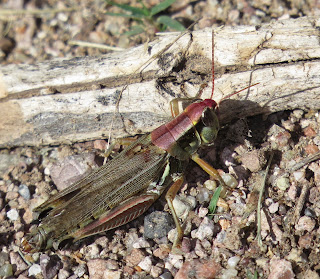 This year was a good one for the Lakin Grasshopper here in Colorado, and also in New Mexico, as heavy spring rains provided the nymphs with plenty of food after years of draught. The adults have hung around a long time, too. Just yesterday I spotted one basking on the sunny side of a building in our townhouse complex.