A Beautiful Place to "Bee"

If the word "bee" was a verb, Colorado would be a very good place to "bee." The diversity of native bee species is high, with at least 946 species of bees in the state. This past month alone I have personally observed many interesting bees. 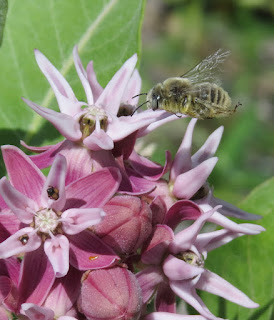 Male cactus bee, Diadasia enavata, approaching milkweed flowers
Slowly, more people who are not scientists are learning that there are bees other than the Honey Bee and bumble bees. The overwhelming majority of our native North American bees are solitary, each female constructing her own nest as a burrow in the ground, a hollowed-out pithy twig, or a pre-existing cavity in wood, rock or masonry. A few mason bees make free-standing mud nests. Some of the ground-nesting sweat bees express some degree of sociality, with daughters helping their mother raise a second generation of offspring. 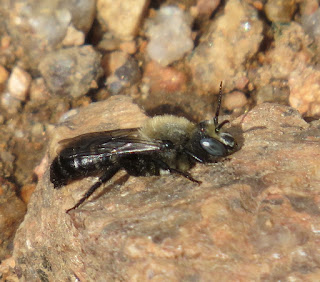 Male leafcutter bee, Hoplitis hypocrita
Male bees often congregate in the neighborhood of places where females are nesting, creating the impression that they are social and "swarming." Male bees lack stingers, but to those unaware of that fact an active aggregation of flying males can be intimidating.

My wife organized a group of naturalists to visit "Emerald Valley" on the back side of Cheyenne Mountain, beyond the reach of The Broadmoor resort camp, on June 29. A break from the mostly overcast and rainy weather we've been having allowed us to observe several species of bees. Even the trail itself provides bare earth that burrowing bees like to nest in. 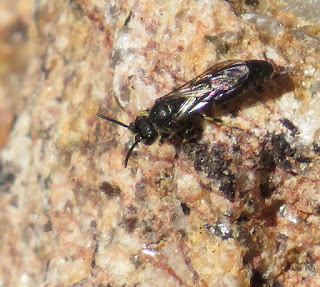 Male yellow-faced bee, Hylaeus basalis
Most bees are difficult to identify from images alone, but I am fortunate to have colleagues like Hartmut Wisch, a naturalist in southern California, and John Ascher at the American Museum of Natural History, who are so familiar with native bees that they can make many species-specific identifications from images of live bees. Hartmut helped me identify the surprisingly large male Hylaeus basalis from Emerald Valley; and John shocked me by identifying the bigger, hairy males on the trail as "plasterer bees" (aka "cellophane bees") in the genus Colletes. Females of both Colletes and Hylaeus coat the cells of their underground nests with glandular secretions that are organic polymers (plastic!). This keeps the pollen and nectar from spoiling as the larval bee eats it. 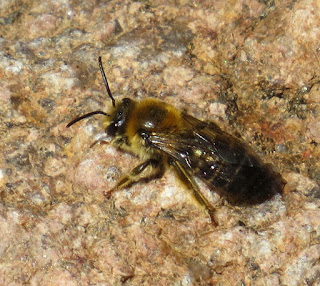 Male plasterer bee, Colletes sp.
Other higher-elevation species include leafcutter bees like the genus Hoplitis, some of which are metallic green or blue. Males drive each other off, and flirt with females, around logs with beetle borings where the females make nests.

Sometimes, you are what attracts bees. I had the pleasure of entertaining a female "sweat bee," genus Halictus, as she sipped my perspiration during the Emerald Valley trip. 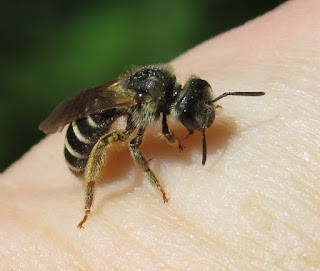 Female sweat bee, Halictus sp.
A trip to Lovell Gulch in Woodland Park, Colorado (Teller County, elevation over 8,000 ft.) on July 13 gave Heidi and I a treat in the form of a female Megachile melanophaea pausing with her burden of a piece of leaf she had just cut. Thanks to John Ascher and Étienne Normandin for making the identification. Leafcutter bees shear oval pieces from soft leaves or flower petals to fashion barrel-shaped cells they stack along the length of a pre-existing tunnel in wood, or a burrow in the soil. Perfectly round leaf pieces cap a finished barrel, which will contain a pollen-and-nectar ball and an egg. 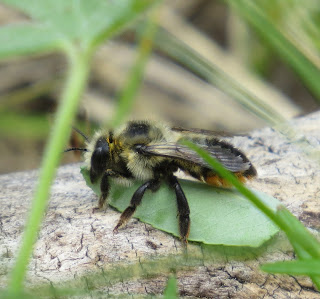 Female leafcutter bee, Megachile melanophaea
Back down here on the plains, additional bees can be found. The sandy soil is a perfect substrate for ground-nesting bees like Calliopsis zebrata in the family Andrenidae. I was surprised by the size of the males of this species. Most Calliopsis are very small. Males fly relentlessly over places where females nest, landing ever so briefly now and then. 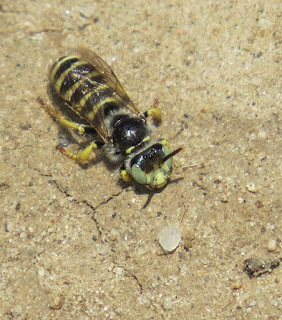 Male mining bee, Calliopsis zebrata
Flowers are, naturally, where you see most bees as they sip flower nectar and, if they are females, collect pollen. We are having an exceptionally wet year (wettest May on record for El Paso County), and while wildflowers have prospered, there appears to be a dearth of pollinators in terms of abundance, at least.

Bees do have their enemies, and sometimes those enemies are other bees. I was stumped by one particularly large, solitary bee I encountered on May 28 in Cheyenne Mountain State Park. The insect landed on the trail and stayed there, allowing me to approach close enough to take pictures. Doug Yanega of the University of California, Riverside, another top-notch bee expert, kindly provided the identification of Melecta pacifica fulvida. It turns out this species is a cleptoparasite of the digger bee Anthophora pacifica. The female Melecta enters the burrow of its host and lays an egg there. The larva that hatches then eats (steals) the pollen and nectar intended for the host's offspring. 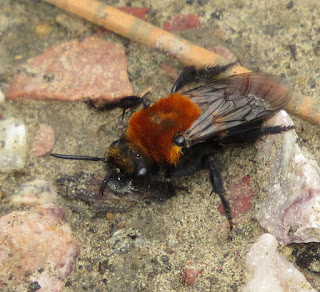 Female cuckoo bee, Melecta pacifica
I do hope that if you don't live in Colorado, you will be able to visit and take in the rich diversity of flora and fauna here. I would be happy to go afield with you and introduce you to our "bee"-autiful flora and fauna.