I am finally remembering to shoot video of interesting insect behavior when I'm presented with the opportunity. Please do not come to expect movies and clips as a regular part of this blog, but know that I am trying to get that kind of documentation. For example, I recently happened upon a female spider wasp, which I later identified as Agenioideus humilis, dragging an unidentified, comatose orbweaver down the rockwork on the exterior of an outbuilding in North Cheyenne Cañon park here in Colorado Springs, on June 27. 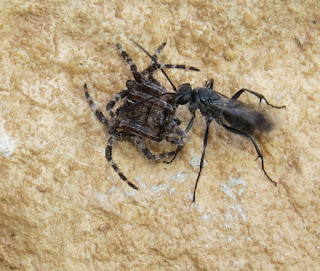 This is a small wasp, females ranging from 5.5-10.5 millimeters in body length (8 mm average), males even more diminutive at 4-9.5 millimeters (6.5 mm average). Both genders are dull black, with a dorsal white spot near the base of the tibia ("shin" segment) on the hind leg. The wings are clear, but with a dark edge and broad dark band on the front wing.

Agenioideus humilis ranges across the entire U.S. save for the northern Rockies, northern Great Plains, most of Minnesota, Wisconsin, and northern Michigan. Nowhere does it appear that this species is common, and it is scarce in collections. The wasp does not appear to feed on flower nectar or aphid honeydew, the favorite foods of most adult spider wasps in the family Pompilidae. 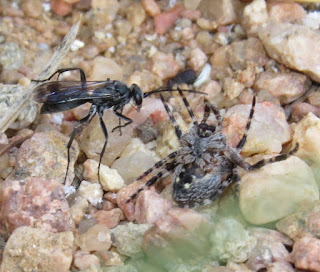 I almost missed seeing this female completely, as she had ducked behind a drainpipe running vertically down the building. The shadow cast by her and her prey is actually what caught my attention. Despite being startled by my approach, she maintained a grip on her spider victim and continued here zig-zag descent down the wall, as reflected in the video clip below.

Once she reached the ground, she deposited her burden and commenced grooming herself briefly. She then ran about a foot away, to the base of the building, where it appeared she had already started a nest burrow. This next clip shows her digging at warp speed, sand flying between her legs and behind her.

Prior records for this species show it will also nest in pre-existing cavities such as cracks and crevices in rocks or the walls of buildings. The single victim is paralyzed by the wasp's sting and hauled to a suitable location for....burial. The wasp lays a single egg on the spider, then covers her tracks by scraping soil over the nest entrance and compacting it with blows from her abdomen. She then departs to begin the process again.

While this wasp was actively engaged in nesting, another wasp lurked nearby, on the wall of the building. Initially, I thought this was some kind of parasitic wasp, but upon closer examination, it turned out to be a male of her own kind. He was substantially smaller and of considerably different body type than the female. 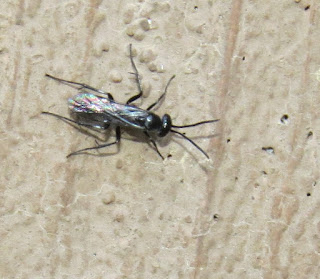 Prey records for Agenioideus humilis reflect that the preferred prey are orbweavers in the family Araneidae, with several different species represented: Acacesia hamata, Larinioides cornutus, and Araneus pegnia among them.

This spider wasp apparently favors woodland habitats with sandy soil, and indeed the landscape where I encountered this one was a mixed conifer (mostly pine) forest with Gambel's Oak, chokecherry, and other shrubs in the understory.

I rarely find wasps toting prey, but I hope the next time that I do I will have means to record the event. Keep your own camera handy, you never known when you will happen upon entomological drama.