How to (Almost) Catch a Leaf-tier Caterpillar (Video)

Last week I wrote about a mason wasp that successfully captured a leaf-rolling caterpillar. Amazingly, the day after I made that observation, I saw another species of mason wasp hunting a slightly different kind of caterpillar. This time it was a female Ancistrocerus campestris attempting of fish out a leaf-tier caterpillar (genus Psilocorsis, family Amphisbatidae) from its shelter between two lashed-together oak leaves. 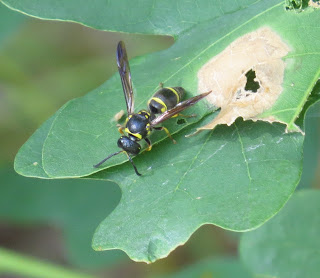 The drama unfolded at Tully Lake, between Athol and Royalston in north-central Massachusetts, by the boat launch. I happened to notice the same schizophrenic behavior in this wasp that I had observed in the female Ancistrocerus unifasciatus female the previous day. I turned on the video feature of my camera a number of times, for long durations, but this wasp's attempts were ultimately unsuccessful.

Leaf-tiers, in contrast to leaf rollers, can involve more than one leaf, creating a "sandwich" like the one the wasp is exploring in the images and video here. I concluded, given the host plant (oak), that this was likely the work of a caterpillar in the genus Psilocorsis in the family Amphisbatidae. That information also helped me in my assessment of the wasp's identity. 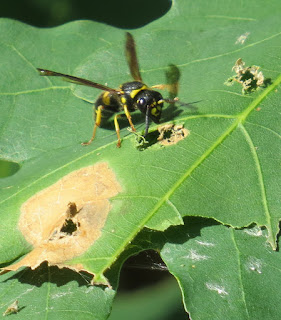 Ancistrocerus campestris is of average size for a mason wasp. The forewing length of females ranges from 9-11 millimeters, and 6.5-9 mm for males. The color pattern on the abdomen is fairly consistent, the hind margins of the first three abdominal segments colored in yellow. The genus Ancistrocerus can be identified by a transverse ridge along the front surface of the first abdominal segment, creating an abrupt angle and "face" that faces the rear of the thorax. In other genera the abdomen slopes more gently toward the thorax.

This time, the wasp did try to tear into the leaf shelter, evidenced by the holes she chewed in the surface of the top leaf. The brown patch is likely the result of the caterpillar feeding on the bottom surface of that top leaf. The wasp also ran around the entire edge of the shelter, trying to wiggle inside and grab the occupant.

Had she succeeded, she would have flown her prize to her nest, inside a pre-existing beetle boring in wood, a hollowed-out sumac twig, or an abandoned mud dauber nest. She divides such tunnels into cells, after completing a single cell by laying an egg and then caching several paralyzed caterpillars. She uses mud to make partitions between cells, and for the plug that closes a finished nest. A nest may contain anywhere between two and eleven individual cells. This wasp has, on one occasion, been seen taking over active nests of the keyhole wasp Trypoxylon clarkei, kicking out the rightful owner. 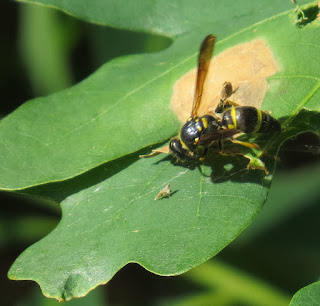 Ancistrocerus campestris can be found from southern Ontario, Canada through New England south to Florida, and west to Minnesota, South Dakota, Kansas, and Texas. Look for this species along forest edges in woodland habitats. 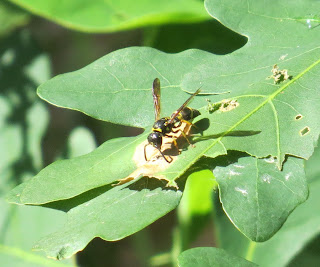