To Handle or Not Handle

I have had occasion to make presentations to groups using live animals, and it has always been a bit of a quandary as to whether to handle specimens in the context of a demonstration, television interview, or other public situation. Here is what I have decided: Rarely will I handle animals. 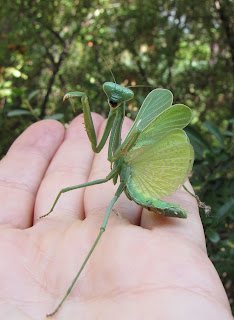 A mantis not happy at being handled

Most contemporary naturalists either love the late great Steve Irwin for his contagious enthusiasm, or despise him for what they consider reckless behavior. There is no question that he has set a standard, good or bad, for recruiting the public to an appreciation of all forms of wildlife, beyond the cute and cuddly. We should aspire to his goal of changing phobias into fascination, but perhaps we should consider techniques other than "seize and show." 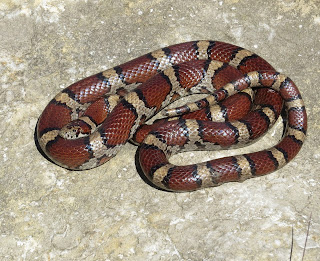 Preferred photo op with a milksnake in Missouri

I had an epiphany at some point in my own career whereby a voice in my head said that if I start handling animals in front of other people, it suddenly becomes all about me, and anything about the animal becomes lost in the perception of my own "bravery." Well, I'd rather be a coward, then. I believe in preserving respect for the creature by leaving it in peace. 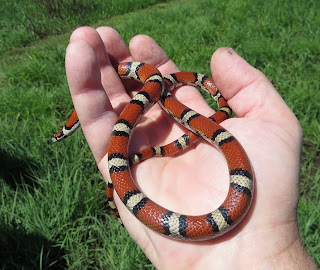 Last resort photo op with another milksnake. Would I do it again?

Are there any exceptions? Sure. Presenting live animals to groups is a challenge because many creatures go into hiding in their cage or enclosure, and are thus not visible, at least to a large audience. Removing the creature for better visibility is occasionally necessary; but, I can often maneuver a captive insect or spider onto the lip of its vessel, or onto a twig, or other prop where the organism can still "decide" where to go, or settle into a resting position.

The safety of both the person and the animal should be a major consideration, too. I do not want any audience member to go home thinking they can handle an animal, whether or not it is venomous or otherwise poses a risk. Handling animals means walking a fine line between being assertive enough to diminish risk to yourself, and gentle enough to avoid injuring the animal. 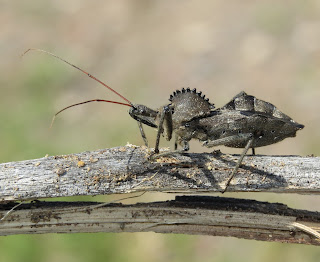 A Wheel Bug on a stick is safer than handling one

I recall when, as a zookeeper, I was asked to step outside my comfort zone and carry around a potto (a primitive primate related to a loris) on a pole at an after-hours zoo event. One of the regular keepers had to put the potto on the stick for me; and I almost had it escape when, after hours of being an inert lump it suddenly came to life as we returned to the building where it was housed. I thought it was going to leap up on the roof! 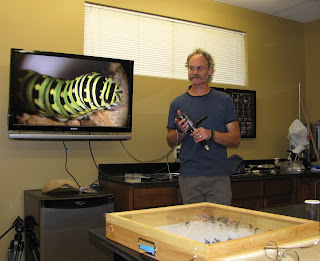 Ok, enough about me. See what I mean? We need to set aside our own ego when presenting animals to the public. These days, with advances in technology, we can capture videos of animals in the wild, exhibiting natural behaviors, and literally project *that* to the audience. There is also no substitute for getting your audience out into the field and showing them organisms in the context of a natural ecosystem, rather than a cage. 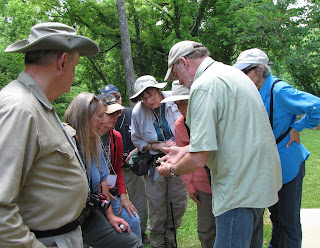 Showing a toad to field trip participants. Is this ok?

This, in my opinion, is what we should be shooting for: get people outdoors whenever possible, and point out animals going about their lives. Birders are perhaps the naturalists we should be looking at for a new model of animal demonstrations. The usual vehicle for recruiting new birders is the field trip. What a concept! Bird banding stations here in Colorado are increasingly allowing public viewing during banding activities. This is great. The birds have to be handled to be banded, so why not kill two birds with one stone, so to speak, and let others observe, up close?

I welcome comments and suggestions here, regardless of whether you agree with my views. Meanwhile, you might reconsider that Facebook profile picture with the live spider on your face. Just sayin'.