Since it is "Throwback Thursday," it seems an appropriate day to begin recalling a wonderful adventure from earlier this fall. Heidi and I decided to participate in a "dragonfly blitz" in southwest New Mexico, from August 27-30, based at City of Rocks State Park between Deming and Silver City. Our first day, the twenty-seventh, was spent driving from Colorado Springs to the park and then on to our bed and breakfast in Silver City. 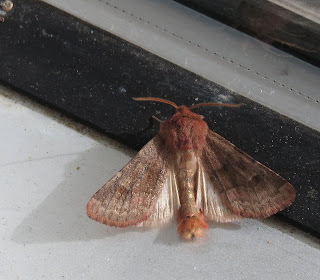 Rest stops along the interstate are often a good place to find insects, birds, and other wildlife. Our first such stop on I-25 was at the El Morro Rest Area north of Trinidad, Colorado (milepost 17.72). The building is something of a big flight-intercept trap for various insects that blunder inside. Outside, orb weaver spiders string their snares from under the eaves. 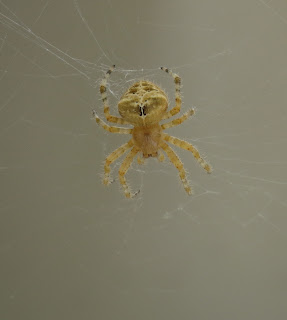 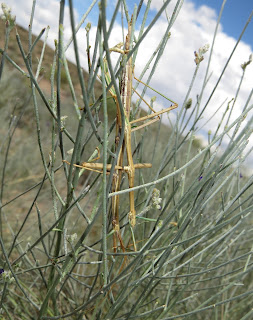 After crossing into New Mexico, we decided to have lunch at a favorite stop called Walking Sands Rest Area, about fifteen miles north of Socorro, New Mexico. It is aptly-named given the shifting dune habitat, most of which is part of the Sevilleta National Wildlife Refuge. Mormon Tea and other odd plants abound, providing cover for lizards, grasshoppers, mantids, walkingsticks, jumping spiders, and other interesting creatures. 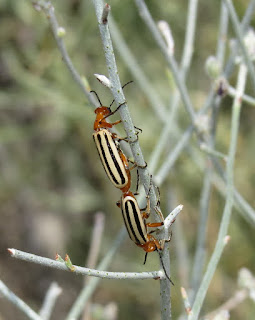 There are restrooms, vending machines, and three-sided picnic shelters on a raised platform. This comes in handy if the wind is the least bit gusty, but the effect is also rather creepy because you can't see other people from the picnic shelters until they are right in front of you. Maybe I have just seen the movie Duel too many times.... 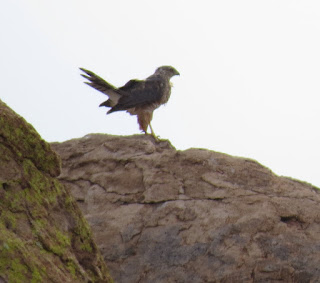 Eventually we reached City of Rocks State Park, which resembles exactly that: a seemingly random deposit of large rock formations and boulders in the middle of the Chihuahua Desert. We were immediately greeted by birds, including a Rock Wren and a covey of Gambel's Quail. A Cooper's Hawk also flew through one of the campgrounds. 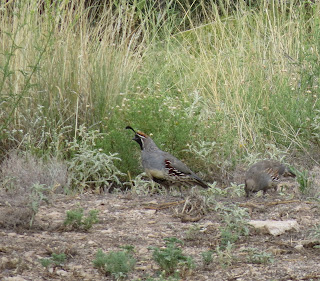 Despite being late in the afternoon, early in the evening, there were still insects visiting flowers, especially Sleepy Orange butterflies. We finally crossed paths with our hosts, Tony and Shela, and learned what to expect the next day. Several parties were camping in the park, others lodging in various (relatively) nearby locations. 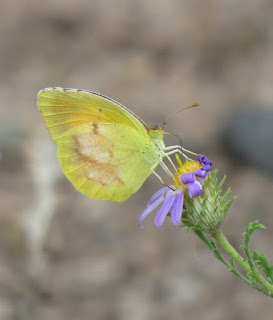 Heidi and I then drove to our bed and breakfast, the Gallery 400 Inn & Art Gallery. I have to hand it to Heidi for picking yet another great little place to hang our hats. 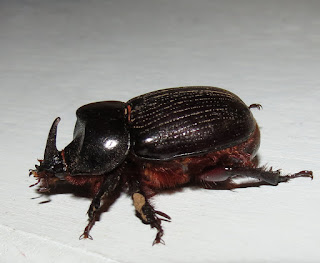 After settling in, we went to dinner in downtown Silver City. We saw our first dragonfly of the trip, startling a large darner (family Aeshnidae) from its roost inside a storefront alcove. After sunset, enormous rhinoceros beetles, Xyloryctes thestalus began flying around. Naturally, I had to take an after-dinner stroll to see what else might be prowling. I was not disappointed. 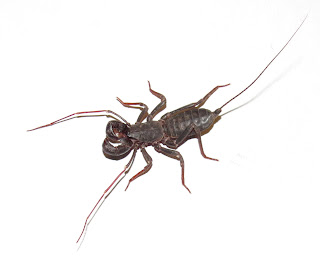 I had barely turned the corner around the block from our b & b when I came upon a bizarre creature investigating a hole in a wall where the wall met the sidewalk. It was a vinegaroon! I had never seen a "wild" Mastigoproctus giganteus until right then. At my approach it dove into the hole in the wall, but either could not get its entire body inside or decided the cavity would not provide a viable refuge. A little delicate prodding and it backed out. I ushered it into a yogurt cup and took it back to the inn for photo ops.

It turned out that the vast majority of rhinoceros beetles were to be found along "The Big Ditch," a riparian corridor subject to periodic flooding. The "ditch" was once Silver City's main street, but is now a linear park. 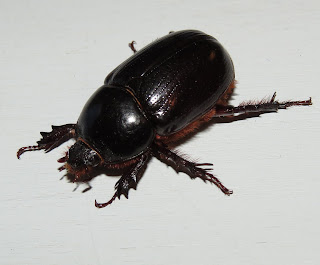 A brightly-lit service station across from downtown yielded a little camel spider (Eremobates sp.), which I also took back for better pictures. I later returned all creatures to the outdoors. 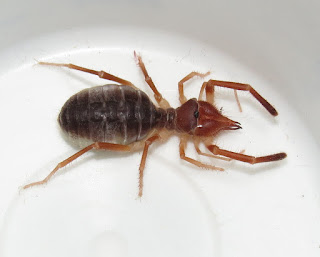 I was pleasantly surprised by this first day of our trip, and it proved to be a good omen of things to come. Stay tuned, I will share more in the coming weeks.