Louse Flies? Are You "Ked"-ing Me?

Until recently, insect diversity here along the Front Range of Colorado this spring has been suppressed by cool, wet weather. How amazing, then, that I should see not one, but two specimens of an insect I had seen only once or twice in all my years. I am speaking of "louse flies" in the family Hippoboscidae. 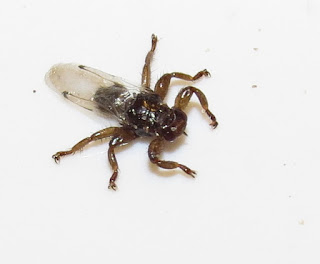 Back at the end of December in 2009, I volunteered to do a guest blog for my good friend Dave Small after he sent me an e-mail inquiring whether I might know the identity of an insect in an image he attached with his message. I didn’t quite understand the story at first, like why two hunters were involved, and why the insect was adhered to hard candy. The image was clear enough, though, that I could tell what the creature was, and that this was not a tall tale evolved from heavy drinking. Here is the rest of that piece.

Deer and related animals play host to a variety of parasitic invertebrates, including the familiar, slow-moving ticks. Such blood-feeding creatures are quick to abandon a deceased host, however, and so animals harvested during the hunt often yield some strange, living cargo during inspection and dressing. 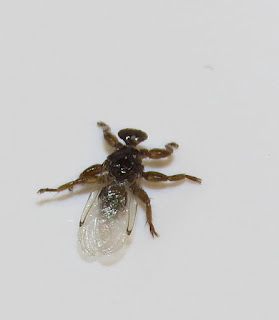 The specimen discovered by these two hunters is an insect known as a “louse fly,” among the most peculiar of insect parasites. They are much more nimble than ticks, dodging attempts to catch them as they skirt through a host’s fur. Their flattened shape, top to bottom, and talon-like claws enhance their ability to slip between hairs and grip the hide of the host, avoiding licking and biting efforts to dislodge them.

Members of the fly family Hippoboscidae, most known louse flies are actually parasites of birds. The most infamous member of the family, though, is the “sheep ked,” well-known to those who manage flocks of ovine livestock. The adult flies are wingless, but they find each other easily for mating when the host animals crowd together.

Back to the specimen the hunters found, and collected by sticking it with a piece of hard candy. That would probably be a “deer ked,” Lipoptena cervi. Here is a terrific image of a related species, Lipoptena depressa from northern California. Both species have a life history that is typical of the entire family of louse flies, but truly mind-blowing compared to other insects.

Female louse flies do not lay eggs. They grow one offspring at a time, within their bodies, much like mammals. A single larva develops inside the equivalent of a uterus, feeding from a “milk” gland. When mature, it is “born alive,” dropping to the ground where it immediately buries itself and pupates. An adult fly emerges weeks later. Deer ked are winged, at least initially, but females that have found a host will break off their wings, the better to maneuver through the dense, coarse hair of their host. 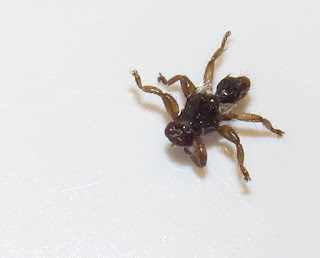 While keds are known to transmit certain diseases from host to host, they are for the most part not economically important. Consequently, little is known about them. Kudos to our hunter friends for bringing this one into the spotlight.

The first specimen I found this year landed on my while I was hiking in Aiken Canyon Preserve off of highway 115, about fifteen miles northeast of Penrose, Colorado on Memorial Day (May 30). I recognized it fast enough to grab it while it was tangled up in some of my sparse arm hair.

After chilling the tiny, 3 millimeter creature in the fridge for a few minutes, I dumped it out into a casserole dish to photograph it. Well, it was apparently completely unaffected by the cold and flew off after I fired off only a couple of legible shots. About 30-45 seconds later, from out of nowhere, it landed on my chest. I guess it pays to be a mammal to keep these flies under some degree of control. A couple of days later, I found the fly had self-broken its wings, such that they were mere stubs. Despite that, the insect was still highly mobile and most of my shots were as blurry as when it had flight capability. 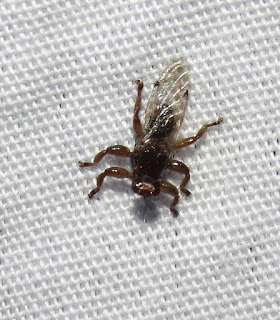 The next encounter was at a blacklight set up to attract moths in Cheyenne Mountain State Park on the night of June 4. I routinely scrutinize the most minute of creatures in the event they may be of interest, and much to my surprise there was another "ked." It, too, was fully winged but, perhaps mesmerized by the ultraviolet light, sat motionless and allowed me to take multiple images....most of which are still not optimal because the blame bug is so miniscule.

Want to find your own louse flies? You might volunteer to go hunting game mammals and birds with your friends to get a chance at shaking one loose. Otherwise, good luck. These insects are common, but so seldom stray from hosts that it is sheer serendipity to stumble across one. More than likely, the fly will find you.