More Drama at the Bee Block

I was going to write at some point about how one of the other benefits of putting up a bee block ("bee condo") for solitary bees and wasps is that their parasites have a harder time finding them there than in a more natural situation. Well, last week I was proven completely wrong about that. On the positive side, I identified two new tenants in the block in our backyard. 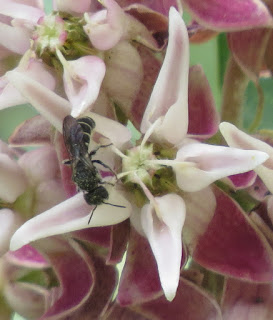 Female mason bee, Heriades sp., on milkweed, before I had identified it

Early in the week I happened to see an insect fly from one of our blooming milkweed plants and literally make a bee line into one of the smaller holes in our bee block. I was not able to make an identification, so swiftly did it disappear. 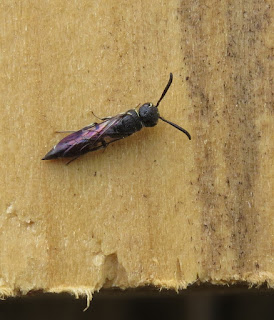 Friday, June 24, I happened to glance at the bee block and noticed a very slender insect in one of the corners. I broke out the camera, took a couple pictures, and identified it as a sapygid wasp, family Sapygidae. Sapygids are parasitic on bees in the families Megachilidae and Apidae, and mason wasps in the family Vespidae, subfamily Eumeninae. The larvae of the sapygids either feed on the food stored for the host's offspring, or live as ectoparasites on the host larvae. Great. 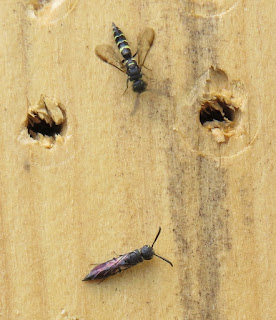 Territorial dispute? Another sapygid joins the first one

Oh, here comes *another* sapygid. There were two on the nest block for only a brief time, and though it is not easy to separate the genders, I had no way of telling if it was a pair, or I believe they were two competing females. Males have even longer antennae and a blunter tip to the abdomen.

While photographing one of the sapygids, I got lucky. One of my pictures captured the mystery lodger in the bee block from earlier in the week. 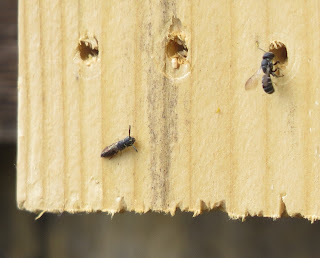 The insect coming to one of the smallest diameter holes is a type of mason bee in the genus Heriades. There are only eleven species of Heriades in North America north of Mexico, and five species in Colorado. Only Heriades cressoni has been officially recorded in El Paso County, but our bee block resident could still be one of the other species.

The female bee uses a pre-existing tunnel, such as an old beetle boring in a dead tree or log, or a hollow twig, in which to make her nest. She creates a series of cells with a partition of plant resin dividing one from another. She usually leaves one empty cell at the entrance before sealing the completed nest with a resin plug. Should a parasite break in, it might be duped into thinking the nest was empty; or at least dissuaded from having to break through a second "door." 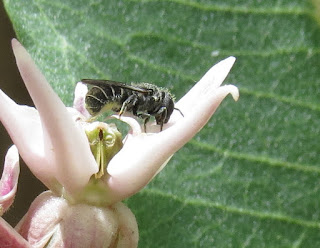 The mother bee gathers pollen with a brush of hairs on the underside of her abdomen. Back at the nest she mixes the pollen with nectar she regurgitates from her crop (an internal food storage organ). This is "bee bread" that she fashions into a ball or "loaf" for each cell. She then lays an egg in the cell, and finally seals it with the resin partition. She repeats this scenario until the nest cavity is filled.

The sapygid wasp that had been waiting patiently for just the right moment to lay her own eggs in the bee nest finally made her move. She quickly backed halfway into the hole on the bee block and presumably deposited one or more eggs before fleeing the scene. This is the strategy that many, if not most, bee parasites use. They stake out a nest in the process of being provisioned, and enter when the host bee leaves to gather more nectar and pollen, or material used in making a partition between cells. 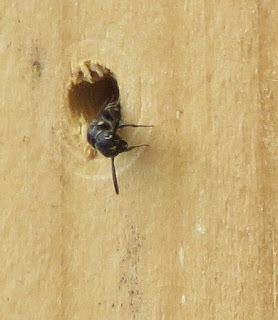 Another surprise happened when I saw a mason wasp approach and then enter another hole on the block. This one is different from the one I wrote about a couple weeks ago. It is smaller and more ornately patterned. It is either Parancistrocerus sp. or Stenodynerus sp. One cannot tell the two apart from images of live specimens in most cases. Even with actual specimens under a microscope it is difficult to make an identification. Like most cavity-nesting mason wasps, paralyzed caterpillars will serve as food for the larval offspring. 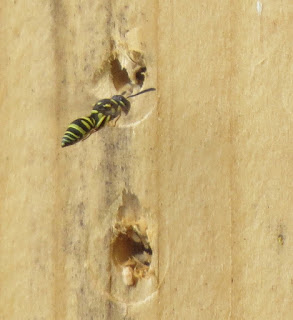 I can hardly wait to see what comes next to our bee apartment building. Please comment if you yourself have a bee block (or more than one), and share what is coming and going from it, what parasites or predators you have seen lurking, and any other pertinent observations.