A "Boring" Place to Nest

Last week I talked about the benefits of putting out bee blocks ("bee condos") for solitary bees and wasps to nest in. I thought it might help to understand why this is important in light of where these insects normally nest in nature. 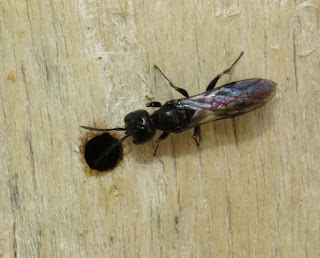 Dead, dying, and weakened trees are exploited by a number of different wood-boring beetles. The adult female beetles lay their eggs in bark crevices and the larvae that hatch then bore into the wood, feeding as they go. Eventually they enter the pupa stage near the surface of the wood. The adult beetle that emerges from the pupa then chews its way out. The result is a round or oval exit hole.

Solitary bees and wasps make use of these abandoned beetle borings. In fact, competition for the right size holes is keen. A wasp can modify the entrance to some degree by chewing-off wood fibers to expand the size, or plastering mud or resin to shrink the opening. That is a lot of effort, though, so wasps will look high and low for a hole that fits them perfectly. 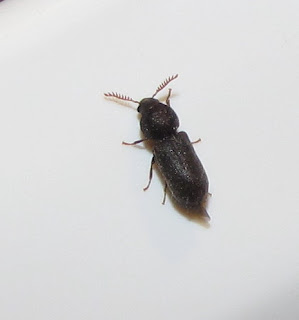 A typical deathwatch beetle, family Ptinidae, that makes the holes that many wasps nest in

Among the most coveted of holes are those made by emerging deathwatch beetles in the family Ptinidae (formerly Anobiidae). These are tiny insects, and you might be hard-pressed to fit an entire pin or tack (head and all) into one of their perfectly round exit holes. Deathwatch beetles are also prolific, and so there will be many holes in a given dead tree. It may look like someone fired a load of buckshot into the bole. 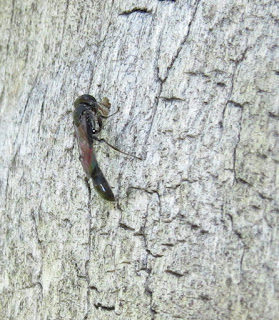 A super-slender keyhole wasp, Trypoxylon sp., about to enter her hole

Last week I came across just such a tree, a cottonwood, that was teeming with wasps coming and going from various holes. I recognized at least three genera: Symmorphus mason wasps, Trypoxylon keyhole wasps, and Passaloecus aphid wasps. None measured more than about six millimeters. Mason wasps harvest caterpillars as food for their offspring. Keyhole wasps hunt spiders, and aphid wasps go after aphids. Some yellow-faced bees, also known as masked bees, genus Hylaeus, are also known to use such holes. 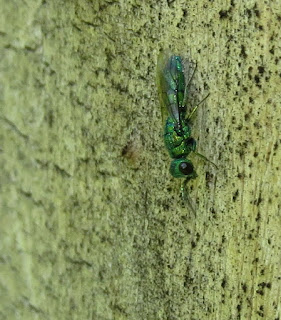 Meanwhile, metallic green cuckoo wasps, family Chrysididae, and wild carrot wasps, family Gasteruptiidae, were looking for opportunities to lay their own eggs in the nests of the other wasps, at the expense of the host's offspring. Mostly, though, there was competition for nest holes, and male wasps harassing the females for mating opportunities. A male or two might jump on a female, and they would tumble off, leaving the door open for another female wasp to claim the nest hole.

Want to witness this action yourself? Look for dead, standing or half-fallen trees with bark stripped off, and usually in a shaded location or at least on the shady side of the tree itself. You might be surprised to see a wasp enter a hole head first, then exit the hole the same way. Somewhere inside there is enough room for the wasp to turn around. 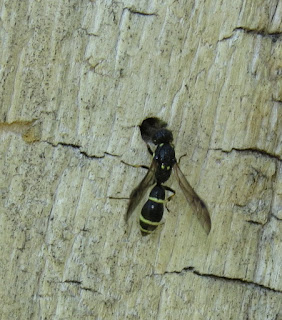 You may have trouble finding dead trees, and this is why solitary wasps and bees need our help. Property owners, and even managers of natural parks, will cut down trees deemed a potential hazard, such that they can avoid potential liability issues including litigation should a tree fall on a person, vehicle, home, or other valuable object. The consequences of this include a housing shortage for everything from flying squirrels, woodpeckers, swallows, wrens, owls, and other birds, to solitary bees and wasps.

Please consider building or buying a simple, but quality, bee block and installing it somewhere on your property. You can find resources to do that in last week's blog post. Let me know what tenants you get as a result. We know precious little about most insects that are not considered economically important in a good or bad way, so all observations are important. Thank you.