Filigree Skimmers Are Back

Back in July of 2014, I documented a single male Filigree Skimmer dragonfly, Pseudoleon superbus, for the first time in Colorado. I am happy to report that there now seems to be a viable population of this species in the exact same location as previously. 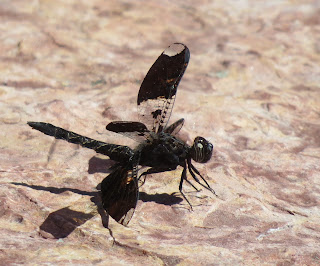 Considering that there was tremendous upheaval at this site when an enormous water line was laid right through the stream (perpendicular, but buried), I am amazed that any aquatic life survived, let alone prospered. The water level has been substantially lower since the installation of the pipeline, but that doesn't seem to bother all the resident Odonata, including Flame Skimmers (Libellula saturata), another rather uncommon species here. 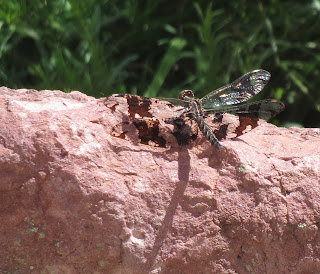 I visited the site on both July 5 and July 7. I arrived around ten-fifteen in the morning the first day, just in time to see a female Filigree Skimmer ovipositing (laying eggs), while at least one male flew erratically around her. Females of this species hover over the water and dip the tip of the abdomen into algal mats, laying at least one egg with each thrust. She quickly finished, paused on a rock for a few seconds, long enough for me to get four images, and then vanished. I never saw her again that day and I stayed a good while. 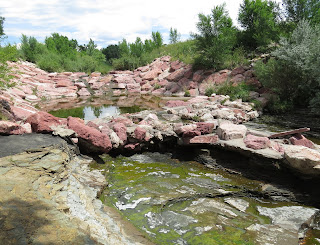 Meanwhile, the male stayed, flying around one of the ponds and periodically flying up and down the stream corridor, which is bound by a narrow, high-walled canyon, albeit a diminutive canyon. As the day heated up, he assumed the posture known as "obelisking," whereby an overheated dragonfly sticks its abdomen straight up in the air to minimize the body surface it exposes to the sun. It is the dragonfly equivalent of a headstand. 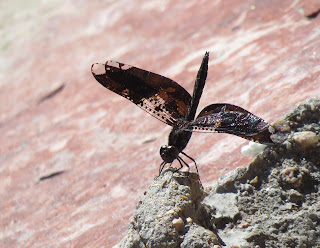 Upon returning home later that day, I informed one of our local dragonfly gurus of my finding, and he promised to visit the next day, July 6. He had tried to find the one in 2014, but to no avail. I honestly thought that if I did not get corroboration, that entomologists everywhere would think I was crazy. Happily, that was not the case then, and it isn't now because my friend found the male this time around. He notified another dragonfly authority who was supposed to come visit the site on July 7, but I did not see him there. 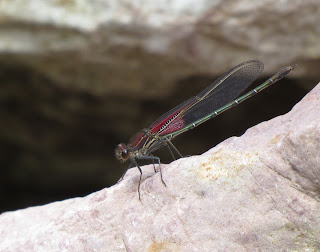 A bonus of my walk through the canyon on July 5 was spotting a male American Rubyspot damselfly, Hetaerina americana. This is not an uncommon species here around fast-flowing streams, but it was the first one I have seen in city limits. The "canyon" is at best a series of ponds these days, so this damselfly may want to find more dependable habitat. 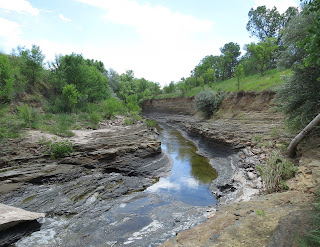 Downstream canyon where I found the Rubyspot

I got to the site a little earlier on July 7, and only found a single male Filigree Skimmer initially. As the sun rose in the sky, illuminating more of the area, he became more active and was, to my surprise, eventually joined by another male. They literally chased each other all over the place. It was rather amusing to watch. I even managed to get a picture with both specimens in the shot. 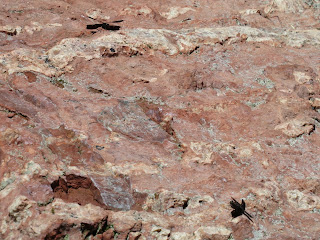 Then, about ten-thirty AM or so, here came the female again. She seemed to materialize out of thin air, went about laying more eggs, paused again for a photo op, and then "poof!" She was gone as quickly as she had arrived. I am told that the males will chase females long distances, but she did not appear to have any escort, at least this time. Her wings are so heavily mottled, and her body so cryptic, she could have landed somewhere close and virtually melted into the landscape. 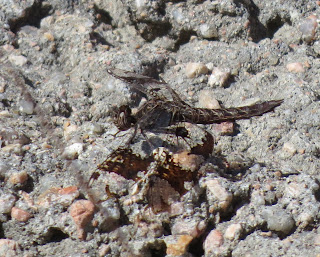 Our Colorado friends should keep an eye out for this species even farther north, in appropriate habitats: Rocky canyons in mostly arid locations. 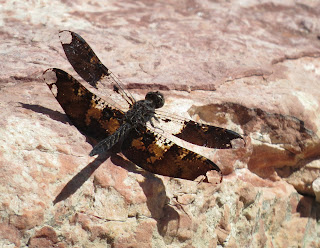