"Product" is NOT the Answer to Every "Problem"

While I prefer to continue winning people over with compelling, fascinating stories of insect life and diversity, I would be remiss if I did not periodically issue posts aimed directly at changing human behavior in ways that will benefit them personally and other organisms as well. Thank you for indulging me in this exercise today. 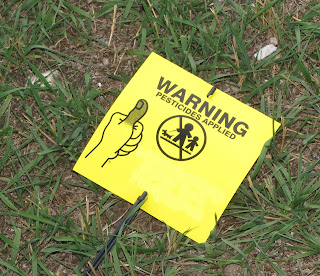 Through my volunteer efforts and associations with AllExperts.com, Facebook groups, and even this blog, I am frequently asked questions that begin with "How do I get rid of...?" The automatic assumption is that an insect or spider in the house, workplace, yard, or garden must have an inherently bad disposition, or negative effect on people, pets, or property. This is the mindset that needs changing.

Let me give these individuals some credit for asking at least. The people who never ask at all, who literally spray first and ask questions later, are the ones we should really worry about. First of all, they will never know what kind of creature they are dealing with, and whether the product they are using will even have the desired outcome. Secondly, they inevitably do not follow the application instructions and risk poisoning themselves, another member of the family, a pet, and/or unintended targets in the form of beneficial invertebrates; they could even blow their house to splinters and bricks. They don't call them bug bombs for nothing. Never mind that failure to adhere to application instructions is a violation of federal and/or state law.

The real crime, however, is that we are incessantly conditioned that "product" is the answer to every problem (even when there is NO problem), and we are paying for it in so many ways, not the least of which are the side effects of chemical dependency in the agricultural and gardening sense.

Here is what no one is going to tell you. The nursery and landscaping industries have sold us on the idea that we can plant whatever trees, shrubs, and flowers we like, wherever we live, with no negative consequences. This is proven to be not only false, but an enormous ecological catastrophe when you understand the effects of exotic botanicals run amok (invasive species), and the chemical dependency required to prop them up in inappropriate soils, climatic zones, and exposure to local animal life. Further, imported plants invariably bring with them exotic insect and other invertebrate pests that themselves wreak havoc on native plants and ecosystems. So begins the "pesticide treadmill" first articulated by entomologist Dr. Robert van den Bosch in the 1970s.

Without fertilizers, herbicides, insecticides, and other treatments, most ornamental plants cannot survive outside their native lands. Native plants do not need this kind of intensive care, are vastly better at supporting beneficial insects, birds, and other wildlife we actually like to see, and their use in landscaping helps mend the holes in fragmented habitat that comes with suburban sprawl. Even in dense, urban areas, native vegetation can draw a shocking diversity of insect life normally relegated to what we would consider "wilderness."

We also greatly underestimate the ability of native plants to withstand nearly complete defoliation and bounce back just fine the next year. This is especially true of trees. A defoliated tree or shrub is not by definition "dead." The resiliency of flora in the face of natural agents of destruction is amazing. Meanwhile, the chemicals we dump on plants to "help" them? Not so good.

I cannot take credit for articulating all of this. Professor Doug Tallamy, in his landmark book Bringing Nature Home, outlines this dilemma eloquently. He also has the scientific studies and statistics to back up his claims. Besides the book, he also speaks to this idea wherever and whenever he is asked. Please check out this Youtube video for an example.

Making responsible choices in the marketplace and adjusting the attitudes within one's own mind are the keys to turning the planet's health around.

The same applies indoors. We panic and reach for the can of insecticide before we ask whether this one individual "bug" represents an actual pest problem or is merely an incidental, accidental visitor. We fail to repair the worn weatherstripping around doors, mend the holes in the windowscreen, inspect incoming objects from outdoors, and otherwise take simple preventative measures to exclude insects and arachnids in the first place.

If there is ever one post on this blog that I would ask you to share, it is this one. Please help spread the word that people can save money, time, and anxiety by simply being more curious, tolerant, willing to learn, and having faith in the way nature works without intervention. I will end with the remark that I have seen minds change, so I know it is possible. Stay tuned for those stories.