Two news stories crossed my Facebook newsfeed and the television news respectively last week that should raise concern for anyone advocating for the conservation of forests and pollinators. What the media hails as milestone inventions could have negative impacts for nature's originals. 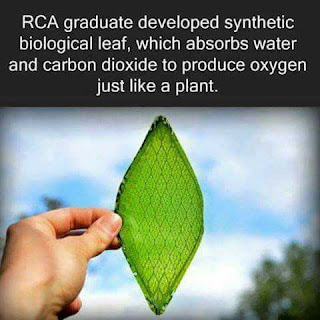 Hassain Develish's "World of Biology" Facebook group posted the above meme on February 5, describing a new, synthetic "biological leaf." This is actually old news, but this video explains Julian Melchiorri's creation and the potential applications he sees for it. First off, this is not a truly synthetic product. It still requires actual chloroplasts found in plants; and those chloroplasts are embedded in a structure derived from silk. Yes, the silk produced by caterpillars of the domesticated silkworm moth. It appears that there is not much truly unique here, except where you can deploy it. Synthetic leaves can be used where actual plants will not grow. 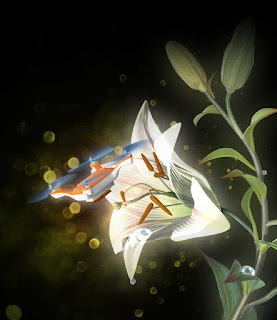 Meanwhile, Japanese chemists unveiled tiny drones coated with sticky horsehair that they claim could pollinate crops. I learned of this story on CBS News This Morning, and the accompanying video clip was so horrendous a demonstration of "pollination" that I started laughing. A similar undertaking is underway at Sussex University in England, under the leadership of Thomas Nowotny. His lab's drones are larger, but may be able to include GPS and other navigational technologies that the Japanese microdrones have no room for. Not to be upstaged, the Wyss Institute at Harvard University has produced robotic bees, too, and envision that they could be useful not only in pollinating crops, but in search-and-rescue, surveillance, and environmental monitoring.

Do we not see the implied messages in these endeavors? The implications are that we do not need the original, natural, biological organisms. Technology can make things "better" than nature. We can continue rampant deforestation because we can create synthetic leaves. We can tolerate a dwindling diversity and population of pollinating insects because we can make drones that do the job (at least for crops because no plants matter unless they can feed people). The most important, and disgusting, message being sent is this: Non-human organisms must have utilitarian benefits to humanity to justify their existence.

Even if you believe in creation instead of evolution, you must admit that we were instructed by God to serve as stewards of creation, not given the mandate to replace it. Indeed, we are servants to other organisms, and they in turn are servants to us, but not always in such black-and-white, easily understood ways. Nature is complex for a reason, and the many other organisms that are responsible for human success on planet Earth are not always as charismatic as butterflies, bees, and trees. Moreover, while it is natural for any organism to view the world selfishly, to enhance its own dominance, humans can actually succeed in eliminating our predators, parasites, and competitors. We do this at the expense of not only those other species, but at the cost of our biophilia, our innate love and reverence for other creatures.

Remember, insects like bees are also food for other creatures. Tiny metallic drones offer no nutrition to a hungry bird, and would likely kill any predator mistaking them for real bees. There is that, and the fact that I, for one, find mechanical facsimiles of insects and other animals far less captivating than the real thing. Indeed, I find them boring, simple, and poor substitutions.