To quote the lovely Ms. Rosanne Roseannadanna, "It just goes to show you, it's always something." It may take months, even years, to learn that something you observed and recorded is noteworthy, or potentially so. Such was a recent case in which an image I posted on Bugguide.net was finally identified, more or less, leaving still more questions than answers.

November 27, 2014, Thanksgiving Day in the U.S., I was at the Cheyenne Mountain Zoo where my wife works as a primate keeper. The zoo restaurant staff caters a holiday lunch, and employees bring potluck dishes to supplement. Before and after the feast, I was out looking for insects, as the weather was reasonably conducive to finding late autumn macro-fauna.

On a wooden fence railing I spotted what at first I thought might be an aphid. Upon closer inspection, it was an aphid relative known as a "jumping plant louse" or psyllid. This is a tiny insect. Total body length is only 2.6 millimeters, or 4-4.5 mm if you measure from head to wingtip. It varies from light green to greenish gray.

Psyllids were once lumped into a single family, but research has shown that there are several families. A few species are very abundant and conspicuous, like hackberry psyllids. A few others are economically impactful, especially in orchard crops. The remaining majority are poorly known, keeping a very low profile on native plants. 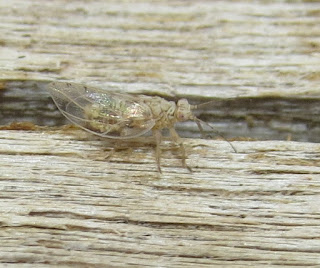 The image I uploaded to Bugguide understandably floundered in obscurity until February 2 of this year when I received notification that someone had left comments and even moved the image into genus-level classification. I was grateful, but also surprised by the comments left by Chris Mallory:

"Bactericera nr. arbolensis
In nearly every regard it is consistent with this Shepherdia-associated species originally described from Arboles, CO. However, the medial cell of the forewing is much smaller than described and illustrated, and in this aspect it does not agree with any known described species.
There could be several reasons for this. First, the size of the medial cell of B. arbolensis may be more variable than the literature suggests. Alternatively, this may be an undescribed but related species. In either situation it is a very interesting find. I'd love to see more of them."

Wow. Chris Mallory is an expert on the superfamily Psylloidea; and is also one of the individuals behind the comprehensive online guide SoCalFauna.net, a photographic gallery of most of the animals one is likely to encounter in southern California.

Thanks to the in-depth profile page at Chris's Psyllids.info website, I learned that the species he thinks it might be is known from Silver Buffaloberry, Shepherdia argentea and Canadian Buffaloberry, Shepherdia canadensis. Neither of those plants is very common, if found at all, along the Front Range of Colorado. It is, however, conceivable that the zoo landscapes with one or both of them, so I will have to check out that possibility. Meanwhile, there are few literature records of the psyllid itself: MONTANA: Roosevelt County; WYOMING: Sweetwater County: Green River; COLORADO: Montrose County: Cimarron; LaPlata County: Durango; Archuleta County: Arboles. All but the Montana record are from west of the Continental Divide. The type specimens, those from which the insect was described and named, were 3 males and 4 females collected by C.F. Baker in Arboles.

There are 24 known species of Bactericera found in North America north of Mexico, and mine is potentially a twenty-fifth. This just goes to show you, you never know what you might turn up if you point your gaze, and camera or phone, at a yittle, teeny-tiny bug.