Honey, I lost the Trox

I was a bit too cavalier the other day in allowing a hide beetle, Trox sp., to relax on the lid of the vial I had it in, on the table while I was taking images of a couple of wolf spiders in a casserole dish we have sacrificed for "studio shots" of various small creatures. Wow, that one sentence says a lot, doesn't it? Well, naturally, when I turned back for the beetle, it was nowhere to be found. It got me thinking about what kinds of things the spouse of an entomologist never wants to hear. 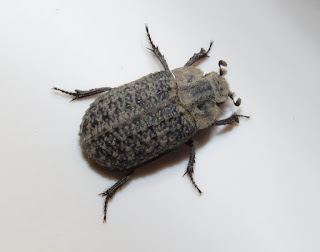 Have you seen me? Trox beetle

Hide beetles, members of the family Trogidae, are innocuous enough. They want nothing to do with us until we are dead. No, really dead. Dried-up dead. Mummified dead. Extra crispy with a few tufts of hair remaining. They come to carcasses after pretty much every other insect has left the scene convinced that nothing of any nutritional value remains. Still, having a normally outdoor insect crawling or flying around the house can be disconcerting. It is certainly not part of most people's "normal" experience.

There is going to be no finding it again unless it raises its profile significantly, which Trox beetles are not prone to do. No amount of "Have you seen me?" posters in every room is going to help, even though it is an adult insect. I understand you cannot even report one missing until it has been gone for a minimum of twenty-four hours. Juvenile insects are even worse. You have to do age progression drawings because metamorphosis changes them so drastically that they become unrecognizable after only a few weeks, sometimes a few days. 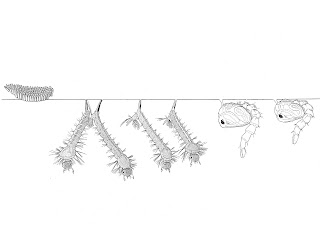 Luckily, the beetle is harmless. I suppose even the most tolerant of roommates and spouses would blow a gasket if their arachnologically-inclined cohabitant suddenly asked "Have you seen my black widow?" This kind of announcement is usually followed by something like "Hey, Where is everybody going (at such a high rate of speed)?" The kids losing a gerbil probably warrants an eye-roll, but just one little venomous organism on the loose and you'd think it was grounds for divorce.

I am fortunate. My wife hardly bats an eye whenever I confess to mishandling some bug that results in it suddenly roaming freely, usually in the vicinity of the kitchen. On more than one occasion she has yelled over to me "Hey, I found your (insert name of fugitive spider or insect here)!" There are also times when she assumes the critter on the counter is something that escaped captivity. If that is not the case then we are both surprised, and not usually in a good way. 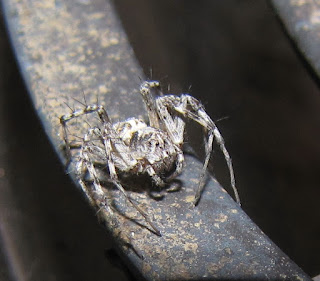 Lynx spider on the stove: Nope, not mine

One word of advice to others like myself: It is w-a-a-a-y better to admit your negligence before she is suddenly confronted with the vagrant creature without prior knowledge of its escape. You know that skillet that is always on the stovetop? Yeah? Ok, then you understand that it can be used against both you and the spider.

The worst reception I ever received from my wife was when I enthusiastically related to her over the phone that "the lab guy we met the other day came over with a jar full of bed bugs....in all life stages!" Hello?....The life of an entomological blogger is fraught with exactly these kinds of dilemmas. You need to do that post on bed bugs, and you need images to go with it. I mean, they can't climb out of the porcelain casserole dish....Can they?