The Wasps and the Fly

You literally don't have to do anything but step out the door to observe fascinating phenomena in the world of insects. I did just that on August 9th, and found myself watching peculiar behavior between a nest of European Paper Wasps, Polistes dominula, and an unidentified fly. 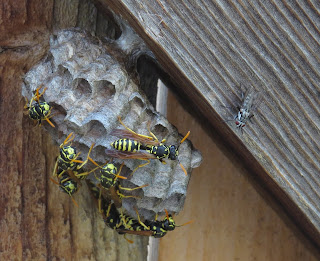 The paper wasp nest has been on the back of our fence gate for months, now. The occupants are amazingly tolerant, even as we come and go. They may get a bit disoriented if we leave the gate open for a lengthy period, but otherwise they are innocuous and we let them be. Imagine my surprise when the thing that has agitated them most was what appeared to be a house fly. 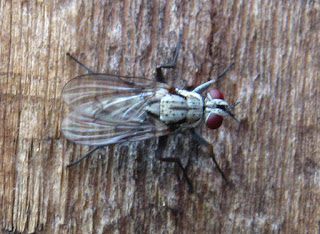 Upon closer examination, the fly had slightly different markings than a house fly, was spinier on the abdomen, and had perhaps longer legs. It walked a lot, nervously, and it was difficult to even get an image of it. Finally, it stopped walking and started, well, stalking towards the wasp nest. One wasp took notice and adopted a very alert posture. Suddenly, the fly flew off its perch and looped around the wasp nest at dizzying speed. It was so quick I was not sure what I was seeing.

The aftermath of the fly's reconnaissance mission was even more dramatic. The one wasp that had seen the fly in the first place suddenly began running frantically and erratically all over the comb, for probably at least ninety seconds. The fly was long gone, but I was suspecting that maybe it had laid an egg and that was the object of the wasp's energetic searching behavior.

Still puzzled by the fly's identity, I took to the internet for the most likely suspects: a tachinid fly, family Tachinidae; or a parasitic sarcophagid (Sarcophagidae). I found a tachinid that looked promising, but viewing images of the species it became readily apparent this was not the right one. Sarcophagids came up empty as well. Furthermore, I have witnessed paper wasps eating sarcophagids, not falling victim to them. Next I looked to my library and found a potential match in a European field guide, of all things. Eustalomyia festiva, a member of the diverse but obscure family Anthomyiidae, looked good. According to the text, it "Breeds in [the] bodies of flies stored by solitary wasps." Ok, but paper wasps are social.... 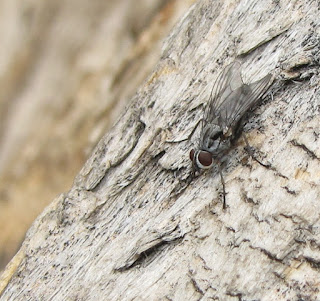 I posted the images shown here on the help group "Hymenopterists Forum" on Facebook, and got this reply from Rui Andrade:

"It looks like Eustalomyia (Anthomyiidae). The larvae are kleptoparasites of wasps."

This makes sense to a degree, but social wasps do not store their prey for later consumption by their larval offspring. They feed masticated prey directly to the larvae. There is therefore no opportunity for a fly larva to develop in a social wasp nest under those circumstances, as a kleptoparasite feeding on prey intended for the host's offspring. The only alternative I can fathom is that the fly is parasitic on the wasp larvae themselves. Cursory review of the literature does not inform my opinion, as they all stubbornly state that solitary wasps are the victims of Eustalomyia. The wasps are not going to let me peer into each cell to see if there is something other than a wasp egg or larva inside, either. 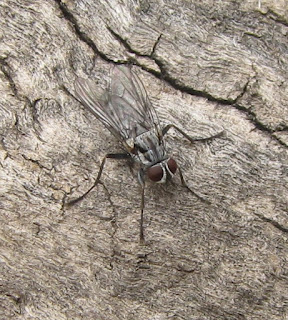 Perhaps this one individual fly was just confused as to the proper host. Maybe it was initially attracted to the bee block ("bee condo") hanging up on another part of the fence, where we have indeed had solitary wasps nesting. This year the bee condo has been devoid of activity for the most part, so maybe scaring the paper wasps was an amusement borne of frustration for this fly. We may never know.