A good many people mistake me for an expert who knows everything about every insect known to man, but I am not. Thankfully, there are entomologists like Doug Yanega who do seem to know everything, but he would be the first to deny that claim as well. Still, I have learned more from him than I can possibly recount. Case in point a wasp that had me scratching my head over the weekend. 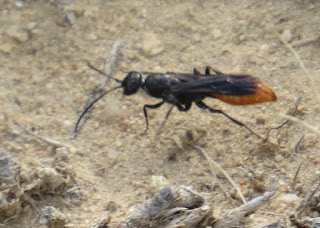 This all started out innocently enough. I was down at Chico Basin Ranch, a sprawling 88,000 acre cattle ranch that straddles the El Paso and Pueblo County line on the high plains, looking for grasshoppers with several other members of the Mile High Bug Club and the general public. At our first stop out on the heavily-grazed shortgrass prairie, one of the first insects that got my attention was a small, maybe 20 millimeter-long, slender black-and-red wasp that was running erratically between patches of grass.

I had it pegged as either a thread-waisted wasp in the family Sphecidae, or a spider wasp in the family Pompilidae, both of which behave in this manner as they search for potential prey. I did not have the camera set for speeding Hymenoptera, so the images are a bit blurry. Now I am wishing I had spent more time with this creature, but hindsight is twenty-twenty. I do not recall the wasp ever flying, but I figured a close approach might send it fleeing permanently.

Back at home, reviewing the magnified images on my computer, I quickly decided I had no clue at all as to what I was looking at. It seemed to be a fusion of the two potential suspects I had surmised initially. So, off to the "Hymenopterists Forum" on Facebook I went. Posting the images there got me several "likes," but no one ventured an identification. Enter Doug Yanega, a good friend and colleague from the University of California at Riverside. He is always willing to help others online and in person, and the university's collection is so well organized that he can use it as a reference for cases like mine. 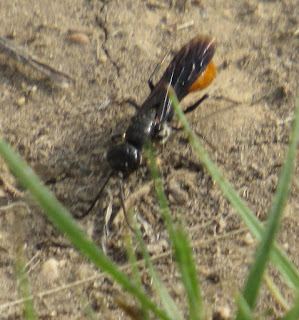 "I just recalled the other name I was thinking of: Pterombrus rufiventris (now in Thynnidae). I can't find any photos of it online, but I caught one in Kansas once and it had me stumped for a while," wrote Doug. Well, nice to know I'm not the only one who has been baffled by this species. Doug went on to add "Just checked our collection, this is Pterombrus rufiventris, and it attacks cicindeline larvae. Very rare but widely distributed. No photos in BugGuide."

It is no wonder that I did not recognize it, because the most common thynnid wasps are in the genus Myzinum, and they look nothing like this. See my blog post on those here. 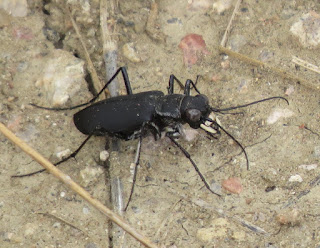 The Large Grassland Tiger Beetle, Cicindela obsoleta is one known host for this wasp.

Cicindelines are known commonly as tiger beetles, colorful and active predators in their own right. The larval stage typically lives in a vertical burrow with a diameter just barely large enough to accommodate the grub. The larva has a flattened head that is held flush with the top of the burrow, the better to see, lunge after, and seize any unsuspecting insect that happens by. The victim is then dragged into the burrow to be consumed. A wasp has to have a lot of bravery to take on one of these voracious beasts, armed as they are with large and powerful jaws. True, the wasp does have her stinger, and I can only imagine how deftly she must wield it to be successful.

According to field observations by others, the wasp crawls down the burrow of the tiger beetle larva and stings it repeatedly under the head or thorax, before depositing an egg on the grub's abdomen. The mother wasp then plugs the burrow with a solid, compacted layer of soil, and then fills in the remainder of the burrow above the plug with loose soil particles. Her egg hatches in about 3 days, and the wasp grub that emerges grows by feeding on the tiger beetle larva for almost 9 days. The mature wasp larva then detaches from the now-deceased host and spins a cocoon in the burrow of the host. There it overwinters, emerging the following summer with the monsoon rains of July. 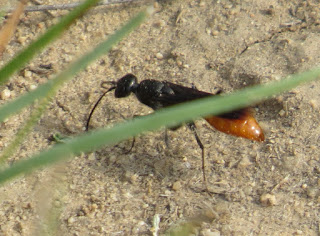 Indeed, this year Colorado has seen extraordinarily heavy precipitation from severe storms. Timing is everything, and I consider myself lucky to have crossed paths with this rare insect. These are perhaps the first images online of the species. Keep your eyes out for this, the western subspecies P. rufiventris hyalinatus, and the eastern subspecies P. r. rufiventris, from southern California to Texas, and on to Georgia and Virginia.