Look, I know that the curators at the Denver Museum of Nature and Science are genuinely appreciative of the donation of my insect collection. I am reasonably certain most professional entomologists also applaud my gift to the scientific community. Unfortunately, Uncle Sam could pretty much care less, thanks to changes in the tax laws, and that fact has me incensed. 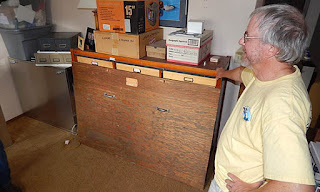 Packing up
© Denver Museum of Nature and Science

I am a writer, and make an income that barely exceeds the poverty line most years. So, my wife and I file a joint income tax return. We have never itemized, as the Standard Deduction exceeds what we spend in charitable donations. Meanwhile, if you itemize your deductions, you can exceed the Standard Deduction, but only to a certain point (half of your Adjusted Gross Income, I believe).

The hardware alone in which my collection was stored, amounts to more than $13,000. This covers three storage cabinets, the 116 drawers in those cabinets and beyond, the "unit trays" inside the drawers that keep specimens organized, and the pins on which the insects are mounted. I am not even including the fifteen Schmitt boxes I used for temporary storage, which conservatively totals $450.

Claiming a charitable donation of over $5,000 in this case requires an independent appraisal of the collection, and here is where I have to admit mea culpa. In my defense, the collection was in a spare bedroom surrounded by many other items, making it a real challenge for me to get to it, let alone an appraiser. Also, appraisers charge for their services, and I have not had a lot of money to spare for that kind of expense. It could still be done, at the museum, but because of tax changes on the horizon, it is becoming apparent that the exercise would likely be one of futility. Oh, obviously, doing the math, a $5,000 deduction is less than the Standard Deduction, so it is not an option to do this incrementally starting with our 2017 return. 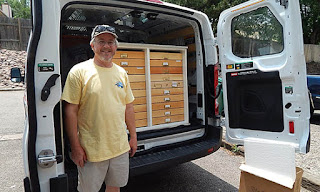 Away they go
© Denver Museum of Nature and Science

I was informed by a former tax preparer that beginning in 2018, the Standard Deduction for married couples filing jointly will nearly double to $24,000, though we will all lose our individual exemptions, so not as rosy as it seems. So, while an appraiser may or may not value my collection over that amount, would it be worth the cost of the appraisal to bother finding out? Not likely.

Part of the problem is that the IRS (Internal Revenue Service) uses only FMV (Fair Market Value) to assign value to donations. As you can imagine, animal specimens do not rank highly in that regard because so few species are in high demand in the marketplace. Yes, there is a flourishing consumer trade in preserved insect specimens, usually obtained through dealers, and mostly limited to tropical species from rainforests around the globe. Specimens like mine from temperate regions are rarely as glamorous in appearance, not nearly as large in size, and therefore not valued as much as gaudy "oh, my!" species. There is no catalog that covers all insect species with corresponding price tags.

Appraisers are then left to add value based on the physical condition of the specimen, whether it has valuable data denoting exactly where and when the specimen was collected, and by whom. If the specimen has been identified to species by a recognized authority, then that also adds a bit more value. It is still subjective in the eyes of IRS accountants, and even an exhaustive appraisal is no guarantee your deduction won't trigger an audit. 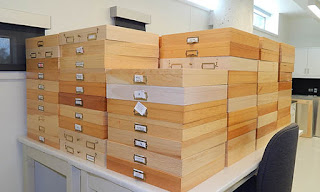 Arrival at the museum
© Denver Museum of Nature and Science

So, here's the thing. I don't want another invitation to a dinner reception for donors to the museum. The pretentiousness of such events I abhor. I also don't want pity for how this has unfolded so tragically for me in the financial sense, though at this point I truly believe I would have benefited more by insuring my collection and then setting it on fire. I want you to be angry, angry at where our society is placing its monetary values. The only thing I am even half good at is writing, and that sure as hell has no value either, except in advertising and fiction.