One sure-fire way to make me smile is by introducing me to any young person who is passionate about something. It matters little to me exactly what the subject of their fascination is, but that they are enthusiastic and eager to share what they know. Young people energize elders who have expertise but have become lethargic and cynical of the future in their fields of authority. Meanwhile, children learn even more from those willing to mentor them. 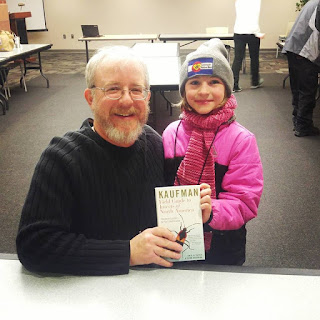 Earlier this month I had the occasion to meet Miss Abigail Nilson-Bartlett, brought to a membership meeting of the Mile High Bug Club by her dad, Ryan, on February 12. They travelled to and from a Denver suburb to our Colorado Springs meeting location. I am not sure who was happier they did: Me or them.

Abigail, at seven years old, firmly asserts that "I am an arachnologist," and I believe her. She can pronounce the word, and then back it up with information that is not widespread knowledge for anyone outside of arachnology. She keeps a couple of pet tarantulas at home, caring for them judiciously such that they are comfortable and healthy, and handled only occasionally. In fact, she wants people to know that "I have a caring for bugs. When they are hurt I care of them well until they are healed. I am a bug doctor and try to help when I can." Her favorite non-spider arthropod is the "rainbow stag beetle." 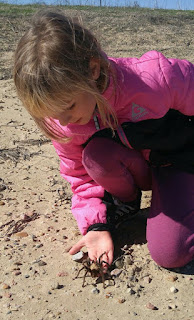 She considers her greatest accomplishment so far to be assisting her father in a search for wild tarantulas in southeast Colorado. She met Dr. Paula Cushing, one of the premier professional arachnologists in the world, when she accompanied Ryan to volunteer at the twentieth International Congress of Arachnology that was held in Golden, Colorado in 2016. Dr. Cushing is a tough act to follow, but at least I could provide Abigail with a signed copy of my field guide.

During the course of our Mile High Bug Club meeting I made a presentation entitled "Wasp/Not Wasp," an interactive PowerPoint in which the audience is invited to determine which of two images depicts a wasp. Most slides were of a wasp and a complimentary "mimic" like a fly or a moth, but some displayed two wasps, or two mimics. Abigail participated with great enthusiasm, and was often correct in her answers. After listening to me explain the "nth" example of some wasp or mimic that preys on spiders, she asked why it is that there are so many insects that kill her beloved spiders. I can totally empathize. I often ask that about crocodiles and mantids that are shown over-and-over in the media eating some animal I like a lot more. Anyway, I did my best to explain that every species has its role in the biosphere and we have to respect that even if we don't like it. "Like ecology?" she asked. All of us older people were dumbstruck because we were at least teenagers before we learned that word. "Yes," I replied after regaining my faculties, "that's the framework that everything fits in. Yes." 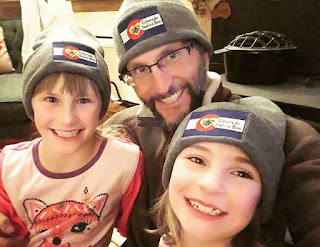 Abigail's slightly older sister Amelia is an accomplished gymnast, but is also interested in natural history. Trips to far-flung gymnastic meets allow the whole family to explore new cities and have travel adventures along the way. They recently returned from Santa Fe, New Mexico, in fact.

It has been awhile since I have either made myself available to mentor students and children, or been afforded the opportunity, and I am grateful to the MHBC for providing a way to do that. We have other young people participating in club events, and I hope that continues to expand. I urge my readers to seek out organizations, events, and other avenues through which they can be mentors as well, whether in entomology or any other career or recreational pursuit. We need to repair trust to where it was when we were growing up. We are the village now, but we have to prove ourselves as responsible adults who truly have the interests of children and their families at heart. 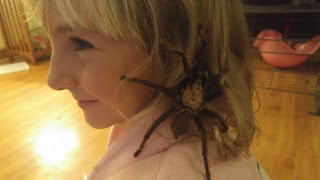 Thank you, Abigail, for helping restore my faith in our next generation of human beings, regardless of whatever they become professionally when they "grow up." You already have a mature sense of self-confidence, and social skills I wish I had myself at your age.