Book Review: Never Out of Season 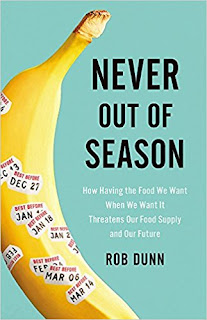 Rob Dunn grabs your attention right out of the gate in his book Never Out of Season (Little, Brown and Company, 2017, 323 pp). Our monotonous diet, and utter lack of crop diversity is not just stunning, it is frightening. The book's subtitle, How Having the Food We Want When We Want It Threatens Our Food Supply and Our Future, is a bit misleading. First, that applies mostly to Western cultures which are affluent enough to import fruits and vegetables from other parts of the world, continually. To his credit, Dunn addresses global agriculture and food security, going out of his way not to ignore Third World nations, poverty, war, and other factors that influence the ability of countries to feed themselves, let alone the rest of the world.

Indeed, Dunn's historical accounts demonstrate how time and time again human populations has been on the brink of starvation, yet are bailed out by individuals and organizations on the far side of the globe. It has been Russians and others who have had the foresight to save seeds in banks and vaults, preserving crop diversity even at their own personal peril. Meanwhile, governments and industries have blissfully ignored the lessons furnished by famines and crop failures.

Never Out of Season is in many ways a real-life thriller, but the reader is largely left to draw their own conclusions as to who the villains are. There are plenty of victims and heroes, but aside from a small group of henchmen who sabotaged a cocoa tree plantation by deliberately infecting trees with a fungal disease known as witches'- broom, few criminals. At least, they do not have overtly hostile intentions. The problem is, overwhelmingly, neglect, plus failure to learn from history and failure to properly invest in efforts necessary to avert future calamities.

The progress of the Green Revolution creates the narrative arc, from its beginnings around World War II through present day. Humanity quickly became dependent on pesticides, fertilizers, and other chemicals to increase crop yields and exploit marginal soils. From there, agriculture scaled up, and today it is largely the province of multinational corporations with a primary agenda of profit and patent protection over feeding people. Consumers are left with increasingly processed foods in the supermarket, the illusion of choice, poorer nutrition, and a widening disconnect with farmers. Dunn is less simple and direct in his presentation of the state of agriculture, and how we got here, but is captivating, entertaining, and educational in his language. His research is exhaustive and beyond reproach. The end notes take up forty-six (46) pages.

Readers looking for an unequivocal indictment of industrialized agriculture will have to search elsewhere. Never Out of Season presents a series of cautionary tales that inform, enlighten, and serve as examples of the kinds of catastrophes we are in for if we continue to devalue genetic diversity in our food crops. Genetically Modified Organisms (GMOs) are not painted as evil here, but powerful tools that can help advance agriculture provided we do not become as addicted to them as we did to pesticides, herbicides, fungicides, and phosphate fertilizers.

Dunn also offers hope at the end of the book, successfully energizing and empowering the reader to plant their own yards with vegetables and fruit trees, join in citizen science projects to enhance our collective understanding of agricultural ecology, and to purchase from local farmers those foods they cannot grow. The variety of approaches to agriculture is beginning to diversify, which is a positive trend, but it remains to be seen whether agri-business will respond favorably, or seek to bury smaller entities under patent-infringement lawsuits and other legal strategies.

Paul Ehrlich, in his own endorsement, states that "Everyone who eats should read Never Out of Season. This reviewer could not agree more. Even fans of fiction would be hard-pressed to find a more compelling page-turner replete with colorful and heroic characters, and an ending that only we, the reader, can finish by holding our leaders accountable for funding priorities, environmental regulation, making conservation of heritage seeds an overriding concern, and bolstering consumer protections. We can also shop smarter and grow our own.