It has been difficult to build-up enthusiasm this summer because insect abundance is way down here in Colorado Springs, but when I get to witness an event like I did yesterday, it makes me glad I went out and made an effort. 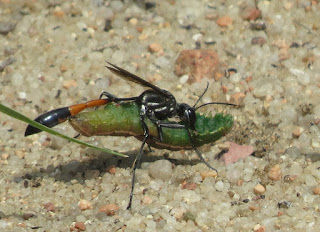 I happened to glimpse a very odd, fairly large insect out of the corner of my eye. It took me a minute to realize it was not a single insect, but two: a female Ammophila sp. thread-waisted wasp toting a caterpillar she had paralyzed. She was trying to locate the concealed nest burrow she had excavated before going hunting, and was wandering around rather aimlessly, but at high speed.

At one point she cached the caterpillar so she could orient herself without such a burden. It worked. She found her burrow, then went back and got the caterpillar. I was lucky to get any images of the transport because she moved so speedily and kept going in and out of focus. Even an attempt at video may have been almost useless. Her agility, with such a heavy load, was impressive. It would be like you or me running at full speed carrying a sofa between our legs. 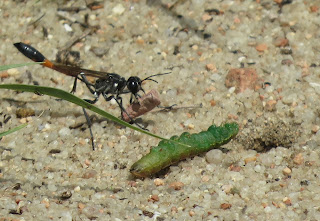 Removing the "door" to her burrow

She abruptly dropped the caterpillar, and in a matter of seconds uncorked the stone plugging her nest burrow. She quickly entered her burrow, turned around inside, and re-emerged to grab the caterpillar and pull it in. She has to be this fast to avoid tiny parasites known as "satellite flies" that will lay tiny maggots on the caterpillar before the wasp can get it secured underground. Indeed, there was at least one miltogrammine fly flitting at the entrance to the burrow. 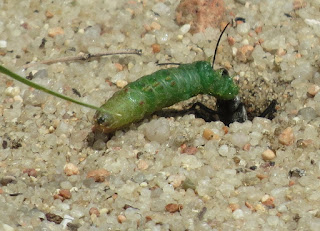 Pulling the caterpillar into her burrow

About a minute or so passed with both the wasp and her caterpillar underground. Finally, she emerged topside and quickly retrieved the stone that had plugged the burrow opening previously. She replaced the stone and began kicking sand on top of it. Notice how she curls her front "feet" to maximize the tarsal rake of spines that aid her in digging and filling. At one point she was startled by a curious ant and took to the air for a spit second. Ants can raid wasp burrows and cart off the caterpillar and wasp egg as food for their own young back at the colony. 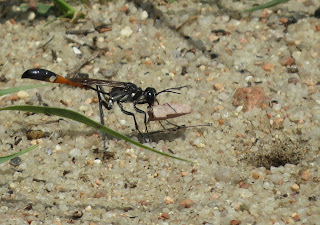 Replacing the "door" to her burrow

By now I was getting a bit stiff from having stood in the same place for a long while. When I left the wasp, she was apparently unsatisfied with the nest closure and was actively chewing down to the rock plug. I left her in peace to finish what she had started. 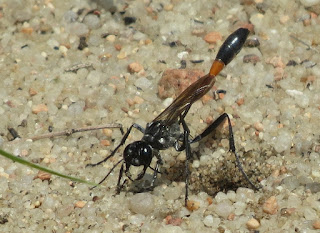 Kicking sand to conceal the entrance

The whole sequence of events involved in the provisioning of a nest by a solitary wasp is truly remarkable. She has to dig her burrow and, load after load, flies off with armfuls of soil to fling across the landscape, lest some predator or parasite recognize her nest from piles of "tumulous" around the opening. Next, she fills in the burrow entrance, obliterating all evidence of any cavity whatsoever. She may make a brief orientation flight and then go off to hunt. How does she ever find the burrow again? We cannot even remember where we parked our car, or left our cell phone, and we reportedly have much larger brains than wasps do. 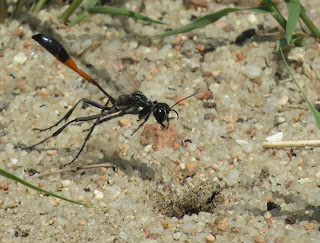 Startled by an ant

Once she has completed her mission of providing one paralyzed caterpillar for a single offspring, she goes off to start the process all over again, somewhere else. Does the wasp immediately forget about the burrow she just completed? How does that instinct work? It has to be plastic enough to address unique situations and overcome obstacles. 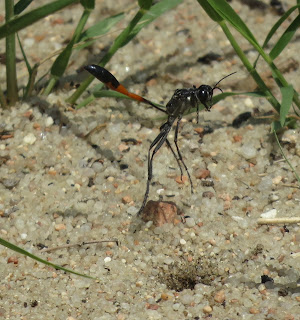 Up and away for good?

Over the coming months, in that underground cell, a wasp larva will hatch from the egg and begin consuming its still-living but inactive larder. Scientists believe that insects have no pain receptors, so that must be a blessing to the caterpillar. Were it deceased, though, the caterpillar would quickly rot under the assault of bacteria and fungi. After consuming the caterpillar, the wasp larva enters the pupa stage, as equally inert as the caterpillar on the outside, but inside the pupa there is a massive reorganization of cells converting the grub-like larva in to a sleek, winged adult wasp. Some genes are turned on, others are turned off. It is amazing to contemplate that a wasp larva, or caterpillar, has inside it the latent ability to execute all the behaviors of the adult. It somehow "knows" it cannot fly, does not need flower nectar, and cannot reproduce as a larva. It understands at some fundamental level that its only job is to eat and grow. 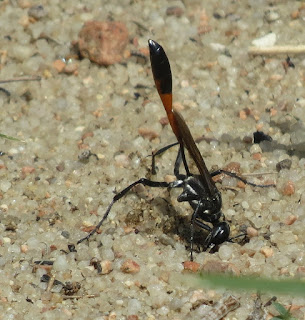 The next time you are out hiking, and a wasp flies up from under your feet, stop for a second. Back up a little. Does the wasp return to the vicinity? If so, keep watching. She is probably in the process of working on a nest burrow and will resume her activities if you stand still. It takes a little practice just to think about this possibility, but the rewards can be astonishing.