The insect world is full of drama, one of the major attractions for entomologists and naturalists and wildlife photographers. Among the more rarely-witnessed phenomena are raids by slave-making ants in the genus Polyergus, known as "Amazon ants." 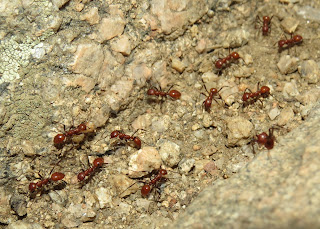 I have had the privilege of seeing three separate slave raids while living here in Colorado Springs, Colorado. All have taken place in late afternoon or early evening. The latest was on July 1 of this year when my wife and I were hiking a trail in Cheyenne Mountain State Park. She happened to pause at what I initially dismissed as yet another harvester ant trail, worker ants bustling about with grass seeds. 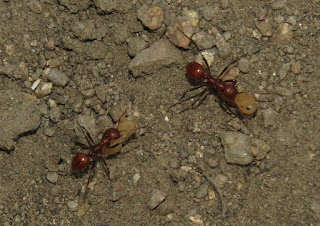 The ants were actually carrying the pupae of their host, ants in the genus Formica. We traced their apparent destination to a Formica colony, but I have learned that this makes sense. The adult slaves on the receiving end of this raid represent members of a colony taken over by an Amazon queen that managed to dupe the workers of an existing Formica colony before killing its queen. Those workers will now set about rearing these most recent arrivals, "adopted" larvae and pupae. 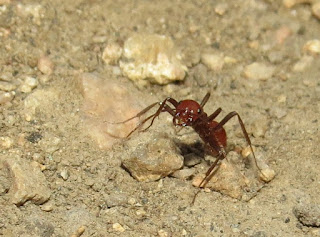 Those jaws are ready for battle

The anatomy of Amazon ant females is such that they are obligatory warriors. Their bodies are sleek and shiny, their slick exoskeletons deflecting the attempted bites of their victims. The jaws of Amazon ants are sickle-shaped and designed to do only one thing well: pierce the heads of the worker Formica ants. Amazons cannot feed themselves, let alone excavate a nest, so they must depend on existing subterranean nests of their Formica hosts. The Formica workers at the receiving end of the Polyergus raid were already enslaved!

The efficiency of a Polyergus slave raid is stunning. One wonders if the victimized colony, pilfered of most of its juvenile workers, ever recovers from such devastation. These ant pirates show now mercy, except for the kidnapped larval and pupa offspring, the majority of which they somehow manage to transport without injury. Not that some of these soft-bodied juveniles will not end up as food instead of slaves, mind you. 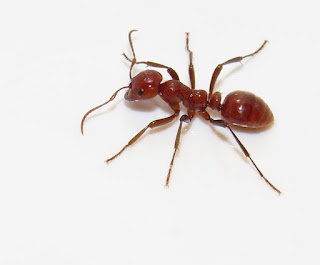 How this specialized lifestyle came to be is open to conjecture, though a reasonable theory comes from studies of ant evolution and genetic relationships. There are slave-making species in the genus Formica, some of them obligatory slave-makers, and others facultative. Facultative social parasites are species capable of existing and prospering in the conventional sense, but are also opportunistic slave-makers. It is surmised that Polyergus Amazon ants evolved from the obligatory slave-making Formica species. Indeed, they appear closely related.

An average colony of Polyergus is between 300-500 workers, surrounded by many hundreds of their slaves. Such a colony can include a mix of different Formica species. Raids on Formica colonies are frequent, and so Amazons need a robust population of host colonies that they can draw from. 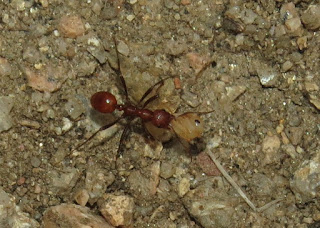 Carting off the "booty"

The genus Polyergus is holarctic (found throughout the northern hemisphere), but reaches its zenith of diversity in the United States. There are fourteen species in the world, eleven of which are found only in the U.S. Polyergus mexicanus is likely the one I have been seeing here along the Front Range of the Rockies. Ant diversity in general is surprisingly great here in Colorado, so it is easy to assume you are only seeing a few species when in fact there are several.

Keep an eye out for interesting ant behaviors, and try and document them as best as you can. You could shed new light on our collective knowledge of these amazing social insects. 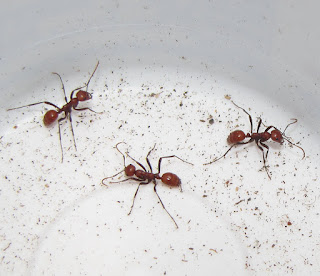