J. Drew Lanham is Why I Will Still Write This Blog

On February 4 I was prepared to sacrifice this blog in protest of the desecration about to take place at the National Butterfly Center, Bentsen-Rio Grande Valley State Park, and all the refuges, sanctuaries, places of worship, private properties, sacred lands, historical lands, and current livelihoods in the Lower Rio Grande Valley.

I was about to engage in an indefinite "blog-out" as my own hunger strike against the current U.S. presidential administration, the newly-elected (if democracy even applies) leaders of Brazil and Madagascar, and the announcement of a new highway that will likely spell the end of rainforests on the island of New Guinea.

When I feel like I am being punished, pummeled....bullied, as I do now watching everything I hold dear being dismantled and destroyed by our current government and those who support it, my impulse is to hit back. My desire is to make tangible the psychological anguish I feel. It is the same behavior seen in toddlers and entirely too many men who throw things, break things, inflict violence on the innocent. They want you to feel physically the emotional pain they suffer from, but their methods of doing so simply compound our collective societal problems.

So, my warped reasoning was that if I cannot have nice things like wildlife refuges, the right to the opportunity to experience wild places abroad, etc, then I will deprive you of my knowledge of entomology, my skills as a writer, and my thought-provoking ideas and opinions. You do not deserve them if you are silent about things that matter more than money. 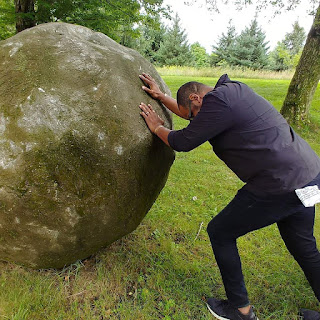 Then I read the following post on Facebook, by a writer, conservationist, historian, and activist who I have come to consider a mentor. Dr. J. Drew Lanham (pictured above) is an Alumni Distinguished Professor of Wildlife Ecology at Clemson University, and an award-winning author. He penned this on Facebook before turning in for the night:

For far too many in these times, the hours fall by as joyless days. We worry and fret over everything. EVERY. THING. Each word is a transgression every thought a crime waiting to be committed. I try hardest to be my best but I know at some point soon I will fail. Isn't it inevitable? What if in my earnest attempts to be human, my imperfectionz somehow mar the perfect person I never was? Who will report my wrongs and send me to ruin? Will I show up here or on the six o'clock news? We are overwrought and wrung out with angst waiting for the worst to happen because we'll be better off in some other end. It all has my head hurting and my heart sore. Is there some cure?

Hate has found its way into my soul for people I don't even know beyond what they "tweet, or what the headlines tell me to believe -- and I cannot find the switch to flip and make it stop. Perhaps if I could only learn to somehow ignore-- but then I cannot deny or turn a blind eye to so much going wrong. There are far too many "ist's" and "isms" still with us. Fighting them all at once is like an eternal career in uphill stone rolling. Just call me Sisyphus. The stress keeps me up late into the night and makes me want to sleep midday even more. Withdrawing seems the easy answer -- just closest family and a few treasured friends --sometimes; and always wildness and birds. Wildness. and Birds.

I guess tomorrow (which has just become. now) is another day.

I'll be okay. If I just read the right books and watch the right things. Somewhere some thought police will allow me clearance. Won't they?

Anyway, sleep mercifully calls. I'll wake soon from a brief nap to wren chatter and roll the rock upslope again. I'll just think of it as job security. Sanity slips in the witching hour but for a few moments soon after the sun comes up, I'll steal away --out there, where joy comes in the form of feathers -- and I can be a movement of one before the hamster wheel spins again-- for just a few moments I'll be hashtagged to a singular cause. Just Being.

Thank you, Drew, for expressing exactly how I feel, and compelling me to soldier on, resisting not just injustice and greed and arrogance and ignorance, but my own compulsions to pull the plug on what I do best.