It Pays to do the Dishes: A Rarely-Seen Beetle is Found 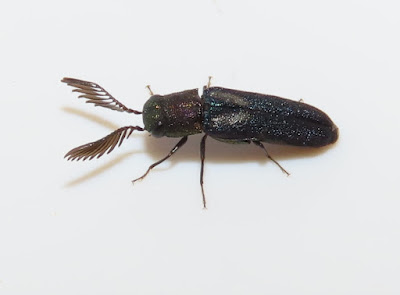 The other day, July 7, I was washing the dishes and noticed a small insect clinging to the outside window screen. Perhaps it had taken shelter during the early morning storms that day….When I was finished with the plates and silverware, I went out to see what the creature was. It was a small jewel beetle, family Buprestidae. I took a picture and decided it was a species of Agrilus that I had not seen before in our Leavenworth, Kansas, USA yard. Boy, was I wrong. 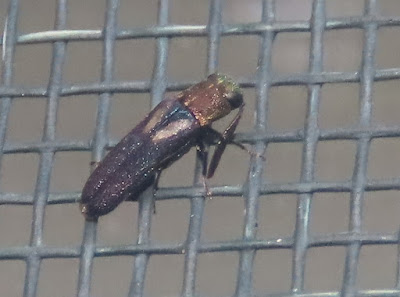 When I first saw it, the beetle had all its appendages tucked in pretty close to its body, but when I disturbed it, it unfurled comb-like (pectinate) antennae, something you do not expect to see in a buprestid. I knew there was at least one species in which the male has this brand of antennae, so I looked it up.

Turns out it is the rarely-seen Xenorhipis brandeli. This specimen is on the large end of the 3-7 millimeter size scale for the species. Given that it is not economically important (damaging), a surprising amount of information is known about it. Unfortunately, most of the relevant papers are locked behind pay walls, and therefore not readily accessible to me. 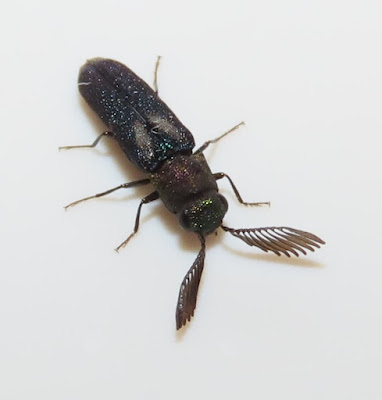 Xenorhipis brendeli is one of only three species in the genus found in North America north of Mexico, and the only one ranging into the northeast U.S. All exhibit sexual dimorphism in the antennae, females lacking the branches that the males do.

Ringo Compean, commenting on one of my Facebook posts, said “That’s an eyelash bug.” How perfectly descriptive! It is still a subdued beetle compared to many members of the Buprestidae. It is basically black or dark brown with blue, green, and/or bronzy highlights, and yellowish accents on the “shoulders.” 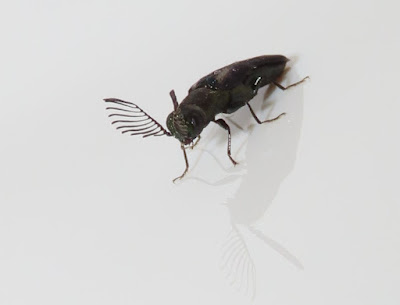 Besides the extravagant antennae, males have a pair of large pits on the underside, on what amounts to their “chest.” These cavities are lined with many setae (hairs) that probably have some sort of chemosensory function. The antennae are definitely tuned to the species-specific pheromone released by virgin females. The insects are diurnal, but there is a narrow window when females emit their attractive scent. Males, at least, are very short-lived, so there is great urgency in finding a mate.

The preferred host trees for Xenorhipis brendeli are apparently hickories (Carya spp.), which includes pecans. There are plenty of hickories in Leavenworth, plus pecans in the bottomlands on Fort Leavenworth. Other known hosts include River Birch and Eastern White Oak. 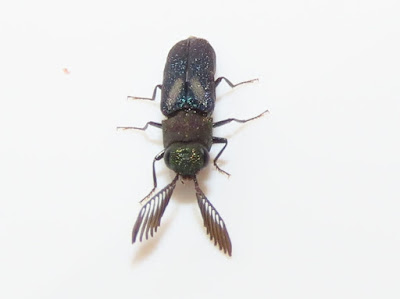 The female beetle lays her eggs in crevices of bark on small limbs, about 5/8ths inches in diameter. This is of interest because I had piled small, dead and broken tree branches from our yard into a backyard brush pile for birds over the winter months. These were mostly from Pin Oak and maple, though.

The larvae that hatch from the eggs bore under the bark….and that is the extent of the preview I am allowed for the 1966 paper by S. G. Wellso.

The fate of this specimen is spoken for. It will be in the collection of a friend and colleague in Arizona, where it will have relative immortality beyond this blog post, eventually available for loan to scientists elsewhere in the world. Meanwhile, I might have to inspect that brush pile again. 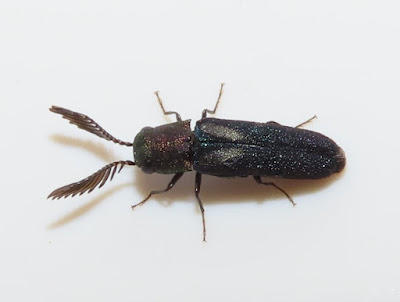