Crickets in the family Gryllidae are sufficiently diverse, and abundant enough, to be the target hosts for a variety of parasitoid wasps, especially those in the families Sphecidae and Crabronidae. There are previous posts about the Steel Blue Cricket Hunter, and the genus Liris, but here in eastern Kansas there is another player. Lyroda subita is easily confused with Liris, but the clue is in the "toes." 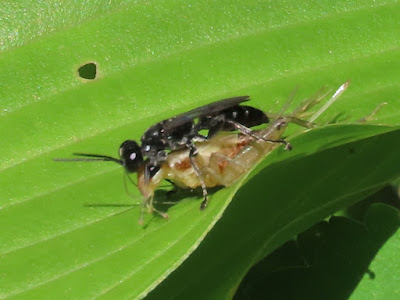 Like all of the larger cricket-hunting wasps, Lyroda is solitary, each female constructing her own nest, in this case an underground burrow. Whether she digs it herself is the subject of debate. At least some observations indicate the wasps use the abandoned burrows of other solitary wasps rather than excavating a nest themselves. The tunnel of Lyroda subita can be fifteen to thirty centimeters below the surface of the ground. There may be only one cell, or two. Historical records are rather scant. 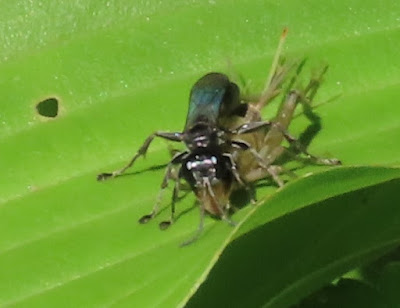 The female hunts almost exclusively crickets of the family Gryllidae, both adults and immatures (nymphs). She subdues her quarry with a paralyzing sting in a nerve center that renders the victim limp. Transporting such a bulky insect is no problem for the agile wasp. She slings it beneath herself, grasps the cricket's antennae in her mandibles, and away she goes. She can run over the ground with it, but can also glide or even fly with it. Multiple crickets are used to provision a single cell, after which she lays an egg on the last cricket, seals the cell, and then repeats the entire process. 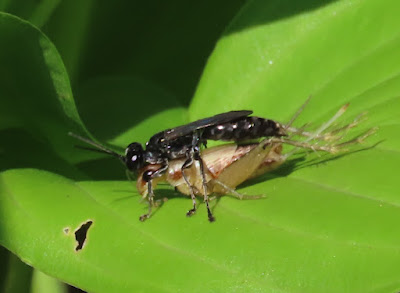 There is at least one record of L. subita using a different host: a pygmy mole cricket of the family Tridactylidae. Since these are mostly subterranean orthopterans, and not that closely related to crickets, the how and why of this anomaly remains unanswered. Other species of Lyroda from other parts of the world are known to use pygmy grasshoppers, family Tetrigidae, as hosts, and those insects occupy similar micro-habitats as pygmy mole crickets. Maybe it is a matter of what is available in a given habitat, then. Pygmy mole crickets and pygmy grasshoppers occur mostly in wet or damp situations along stream banks.

In our Leavenworth, Kansas yard, there are large numbers of Gryllus field crickets, and ground crickets of the subfamily Nemobiinae, offering Lyroda plenty of options. 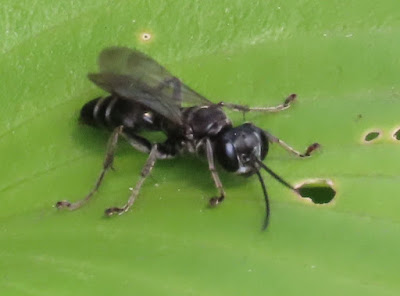 L. subita is a medium-sized insect. Females range from 10-13 millimeters in body length, males slightly smaller at 6-10 millimeters. Both sexes are slate gray in color with silver highlights, especially on the abdomen. In the right light it can appear the abdomen is banded in dark gray and white. The ocelli, a trio of simple eyes on the crown of the head, between the compound eyes, are present. The most easily observed feature is on each "foot." The last tarsal segment bears a very large pad called an arolium (plural arolia), which differs markedly from the petite feet of the nearly identical Liris genus. Liris also has only a single mid-ocellus, the lateral simple eyes being reduced to longitudinal scars. 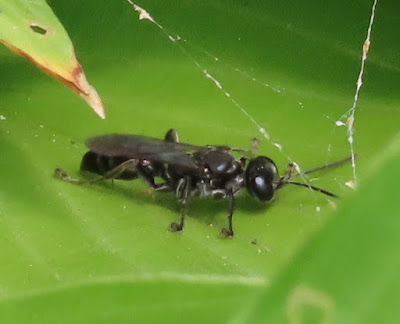 This species occurs throughout most of the United States (except for Washington, Oregon and the southwest states), southern Canada, the northern half of Mexico, and also Cuba and Hispaniola. There are twenty-one other species of Lyroda, most of which are found in southeast Asia, plus Africa, Australia, and South America. 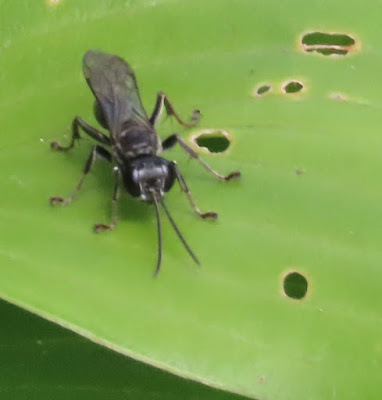