Sometimes, with luck, you stumble upon a wonderful circumstance of insect abundance. My partner, Heidi, did so this past Saturday afternoon, September 17, along a trail through Wyandotte County Lake Park, Kansas, USA. She happened to notice a thick mass of mushrooms at the base of a tree. It was literally crawling with insects. 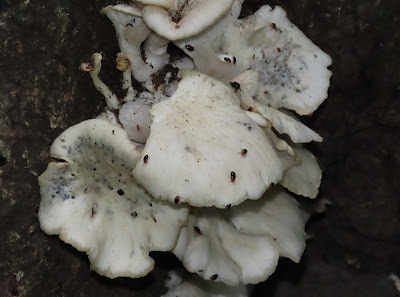 Everybody on the dance floor!

The fungus in question may be a species of “oyster mushroom” in the genus Pleurotus, according to Ben Sikes at the University of Kansas, and with the Kansas Biological Survey. He was kind enough to offer an opinion on my photo of it on iNaturalist. At least some species are fit for human consumption, too, but please do not forage without expert guidance, at least initially. Your experiment in wild culinary arts could end abruptly and permanently if you do not know exactly which mycological fruiting bodies to avoid. 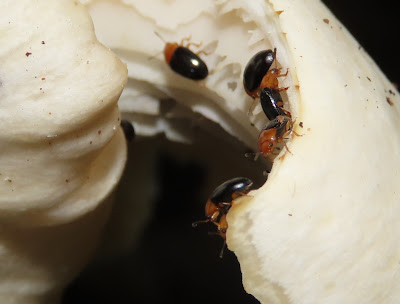 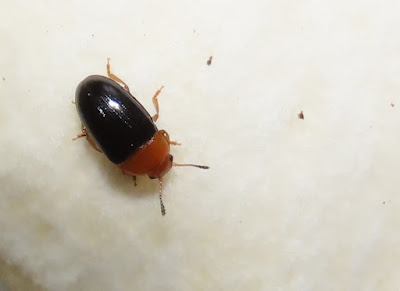 Triplax thoracica, but there may have been another species with a dusky or black belly instead of an orange underside.

The most abundant insect on this particular mushroom cluster is probably a pleasing fungus beetle, Triplax thoracica. That genus, certainly, but that species apparently loves oyster mushrooms. It occurs across the eastern half of the U.S. and adjacent Canada. At only 3-5.6 millimeters in length, they are difficult to spot as individuals, but there were dozens flying in, flying out, and running about. 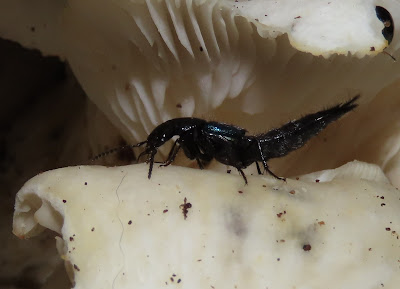 In a prehistoric analogy, Triplax are the herd of plant feeders. Sure enough, there were vicious carnivores prowling through the gills and over the caps of the mushrooms. 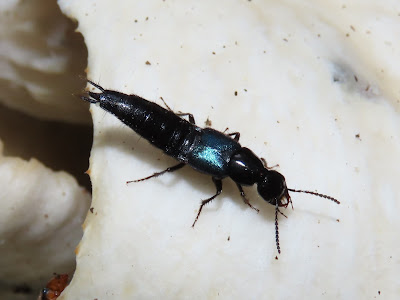 A sleek, serpentine, black rove beetle with metallic blue-green elytra (wing covers) popped into view periodically. Meet Philonthus caeruleipennis, 12-15 millimeters long. Were it a vertebrate, it would no doubt be a weasel, mink, ferret, or other mustelid. It is transcontinental in Canada, but occurs only in the northeast quarter of the U.S. It also occurs in Europe. 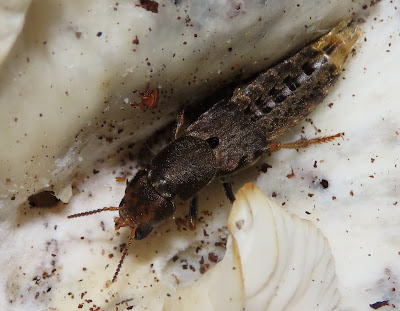 The equivalent of Tyranosaurus rex in this micro-scenario would be the Brown Rove Beetle, Platydracus maculosus. Measuring 22-35 millimeters, it dwarfs its prey, which in this case was the Triplax fungus beetles. 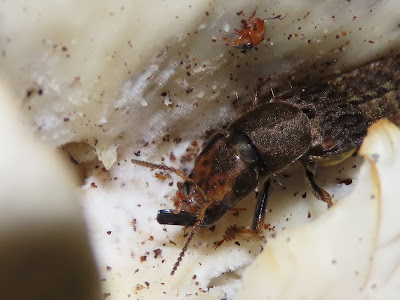 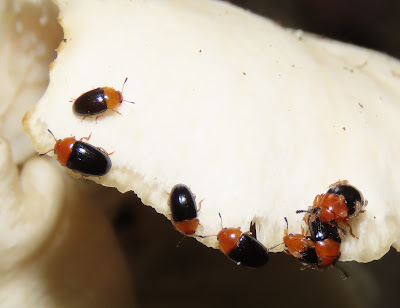 Some of the fungus beetles also had passengers in the form of phoretic mites. The mites, which are probably “mesostigs” in the order Mesostigmata, cause no harm to the beetles. Instead of being parasitic, the mites are hitchhikers, using the beetles as transport to a location where they can feed on insect eggs or other tiny prey. 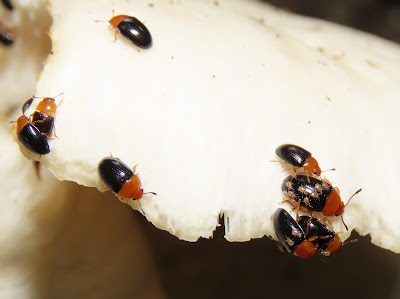 Mites being a little voyeuristic....

Along with the beetles were pomace flies, family Drosophilidae. These are the “fruit flies” you see in your kitchen around overripe fruit, fermented beverages, and other foods. Drosophilids sare surprisingly diverse, and a good variety can be found around rotting fungi “in the wild.” 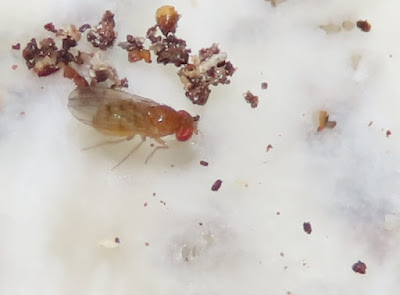 Pomace fly disappointed that the mushroom is not spoiling already....

The latecomer to the party was a worker Tennessee Spine-waisted Ant, Aphaenogaster tennesseensis. She was simply looking for dead or injured insects she could take back to her colony to feed her larval sisters. 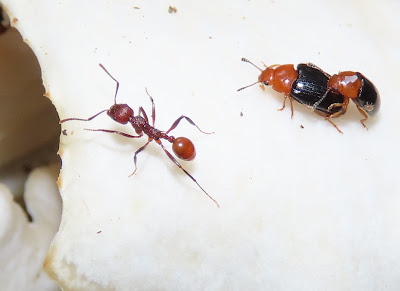 At last, it was time for me to say farewell. Heidi had already progressed down the trail by about fifty yards. 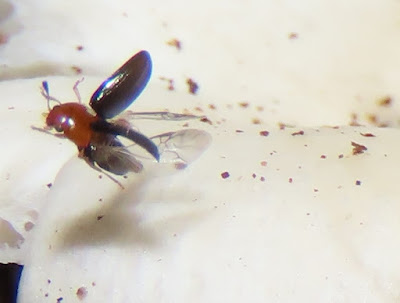 Now is a perfect time to go out looking for mushrooms and their associated insects. We left these mushrooms alone, but sometimes it is necessary to tear apart the fungus to find insects. It is best to do so over a white enamel pan, or some other kind of tray so that it catches the insects falling out. Be quick to grab the rove beetles before they take flight. If you do know your mushrooms, then bonus! You can take uninfested specimens to the kitchen instead of the lab. Enjoy your autumn no matter what you do. 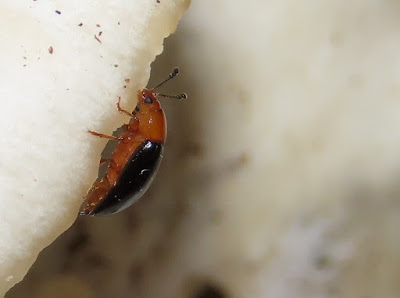