Prowling around a pile of cut logs near my temporary residence in South Deerfield, Massachusetts on the evening of June second, I almost literally stumbled upon one of the most spectacular wasps on the continent. Female giant ichneumon wasps in the genus Megarhyssa may look menacing, wielding a whip-like “tail” that can exceed their own body length, but they cannot sting and in fact are quite shy, easily startled by sudden movements. It is a pity that people are often so alarmed by these insects, as they have an extraordinary life cycle. 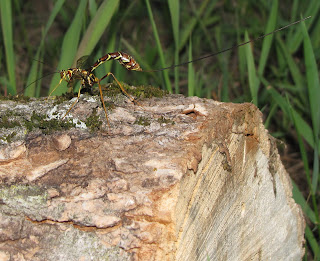 That long, streaming appendage at the end of her abdomen is not a stinger, as the uninitiated tend to assume, but an egg-laying organ called an ovipositor. What she does with it is truly remarkable. She is seeking the grubs of another stingless wasp, the “pigeon horntail,” Tremex columba. Horntail grubs bore in the solid wood of dead, dying, or severely-weakened trees. Along comes a giant ichneumon wasp. The ichneumon somehow “divines” the location of the horntail grub inside the tree or log, then arches her back to pull her ovipositor into position to drill into the wood to reach the horntail grub. 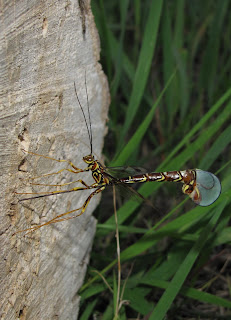 Whether she actually penetrates the solid wood, or winds her thread-like organ through existing cracks and crevices is still a mystery, but she manages to deliver her nearly fluid egg to its target host. The ovipositor is actually three filaments: two form a sheath for the actual ovipositor, bracing the animal’s abdomen and allowing the ovipositor to work smoothly without undo bowing.

Once her mission is accomplished, and her egg is attached to the horntail grub, the adult female ichneumon slowly withdraws her ovipositor and begins the process over again, walking the log or tree with antennae outstretched like divining rods.

Meanwhile, her egg eventually hatches, and the larval ichneumon attaches to the exterior of the horntail grub. It will wait patiently for its host to reach a large, nearly mature size, then begin consuming it. The horntail grub is doomed, destined to yield an adult ichneumon rather than a horntail wasp.

Look for giant ichneumons around dead or dying trees at all times of the day. While ovipositing, females are vulnerable, and one can sometimes see where a wasp was taken by a predator. A hair-like filament protruding from a log is all that is left of the wasp in such cases. 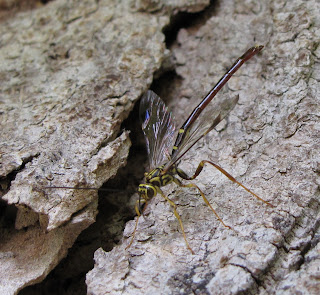 can also indicate the presence of females as they vie for mating opportunities. Note that they almost resemble a different species of wasp! Many males may gather at the site where a female is about to emerge. It is quite a spectacle.

Four species of giant ichneumons collectively occur over most of North America. The ones shown here are probably the species Megarhyssa macrurus. Females can vary considerably in size depending on the size of their host as larval wasps. Smaller individuals tend to have reduced spotting on the wings (or no spots at all). Enjoy looking for these insects and observing their amazing behavior.