Awhile back I wrote an entry about the sleeping habits of solitary bees (“Let Sleeping Bees Lie”) that I observed and photographed in Tucson, Arizona. Here in western Massachusetts, I was fortunate enough to observe the sleeping habits of solitary wasps in the genus Ammophila, family Sphecidae. Known commonly as thread-waisted wasps, the females are energetic hunters of caterpillars, which they paralyze and store in a subterranean burrow as food for a single offspring.

There are many species of Ammophila found across most of North America, but they reach their greatest diversity in the arid west. More on that in a later post. 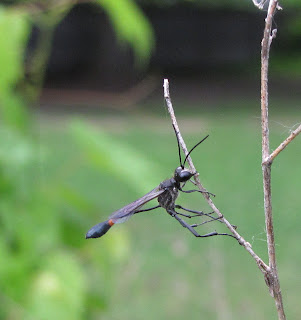 How these wasps manage to get any sleep in this incredibly awkward position is beyond my comprehension. Maybe it is the wasp version of yoga, I don’t know. Simply gripping a twig with your jaws must be hard enough, let alone propping your body at an angle away from your perch. Though solitary, it is not at all uncommon to find loose aggregations of several thread-waisted wasps bedding down in a small area, like this. 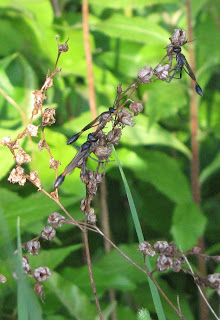 I once found a cluster of them at Smith Rock State Park in Oregon that was packed so densely that I initially mistook them for some strange flowering plant.

Like solitary bees, the wasps tend to turn in early, just around dusk. They can also appear to be in torpor (the scientific word for inactivity), but actually be quite alert and able to rapidly disengage from their perch. I approached another specimen on a later date, and it quickly regained “consciousness,” much to my chagrin.

There are sleeping bees here in Massachusetts, too, that adopt the same “look ma, no hands” biting grip as the cuckoo wasps in Tucson. This little bee is another parasitic type, in the genus Nomada, family Apidae. 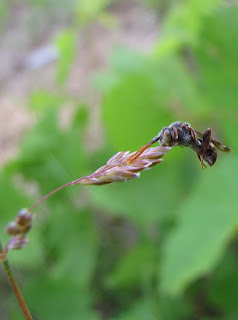 They are parasitic on other solitary bees, especially members of the genus Andrena.

Keep a careful eye out for these sleeping insects, especially in open areas with dry, twig-like vegetation, and around forest edges, even around your yard or garden. Solitary wasps and bees can be approached fearlessly, as they are not aggressive and females will not sting unless physically molested. The males possess no stingers. Well, all this talk about sleep has me yawning. I think I’ll turn in early. I also have a strange compulsion to bite the bedpost….