I got some exciting news this past week that I thought I would share. It involves a species of beetle that I collected while on a photo outing on the Fourth of July near the Quabbin Reservoir in Franklin County, Massachusetts.

While in a forest clearing (well, more of a slash pile of logging residue, actually), I saw a metallic woodboring beetle in the family Buprestidae. It seemed non-descript, much less brilliant in color than others I have seen, but I took its picture anyway. 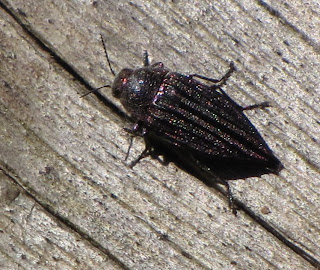 I wanted more images, though, so I captured it alive in a vial and took it home.

After chilling this highly active animal in the refrigerator, I placed it on the kitchen table and took more images. I was finally able to see that it was more or less metallic purple, the granular violet nature of its exoskeleton reflecting the light from my camera flash. 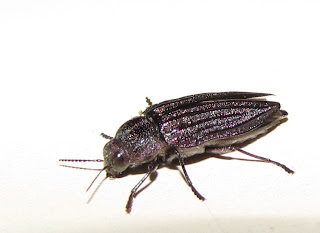 It looked like the beetle had perhaps hatched out of a geode rather than a pine tree.

I posted my two images, one “in the wild” and the other “staged,” to Bugguide.net in the hopes of confirming my identification of it as Buprestis striata. Much to my surprise, the consensus among the experts is that this is actually a specimen of Buprestis sulcicollis, a much less commonly-encountered species. It was, in fact, previously unrecorded for the state of Massachusetts, though long suspected of occurring here.

Getting a state record is reasonably remarkable, but considering that I have been here in Massachusetts for a grand total of two months, it feels pretty spectacular. It would be great if it translated to a wage increase, but alas, I suspect all I will get out of it is “this stupid t-shirt” equivalent. As luck (good or bad depending on your viewpoint) would have it, the beetle subsequently died before I got around to releasing it. I will get to decide where the specimen will be deposited, which is a reward unto itself, I think.

The beetle deserves a bit of notoriety, too, but very little is known about Buprestis sulcicollis. Adult beetles measure from eleven to 15.5 mm. The recorded hosts for the larvae are pitch pine and eastern white pine. Its distribution is mostly from the Great Lakes to the Atlantic seaboard, but there are records as far west as Alberta and the Northwest Territories.

I encourage each of you to not assume that whatever creature you encounter is common, known from your area, or even already known to science. Take pictures, note the habitat, any behaviors you observe, and record the date and precise location you found the organism in. You never know what may become of your patient and careful study.