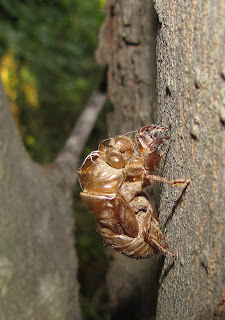 Almost every summer I receive several questions about strange bugs sitting motionless on fence posts, tree trunks, and other upright objects. I thought I would do an entry here to explain the mystery.

The descriptions of the creature that people give to me vary from a “cross between a crayfish and a beetle,” to “gnome-like,” and all mention the large claws on the “front end.” No one has ever seen anything like it, and it is no wonder. Normally, the creature they are seeing lives fairly deep underground.

I have taken to calling these bugs “former insects,” since the objects being seen are not entire insects but the cast exoskeletons (“skins”) of cicadas, family Cicadidae. Scientists call these shed skins “exuviae,” all that remains behind when the insect molts from the nymph stage into an adult. Dragonflies, damselflies, stoneflies, and mayflies also leave behind these ghostly but tangible shadows of their former selves.

The average person rarely sees an animated version of a cicada nymph because the mature nymphs emerge from the soil at night, climbing the nearest vertical surface, and then splitting the exoskeleton down the middle of the back to allow the escape of the wet, soft adult under the cover of darkness. The fresh, pale adults are extremely vulnerable, but their principle predators are diurnal, so they avoid instant death by coming out at night. Cicadas are large insects, so they can be quite conspicuous under the best of cryptic circumstances. 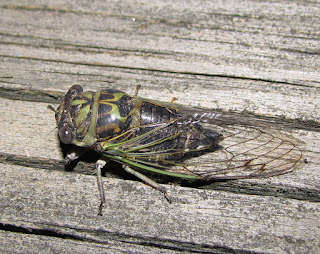 Most people in eastern North America see the shells of “annual” or “dog day” cicadas in the genus Tibicen. They then hear the loud “songs” of the adult male cicadas, not often seeing the insect that makes such a racket. Despite the name, annual cicadas still take a long time to grow up. They live a subterranean existence as nymphs, sucking the sap from tree roots for at least five to seven years. The generations are staggered, though, so some adults emerge every summer. This is in contrast to the synchronous broods (populations) of the periodical cicads or “17-year locusts” that emerge en masse in the late spring or early summer every 13 or 17 years, depending on the latitude of the population.

I like to get questions about things like cicada exuviae. It shows that people are observant and curious, two qualities I really admire in my own species 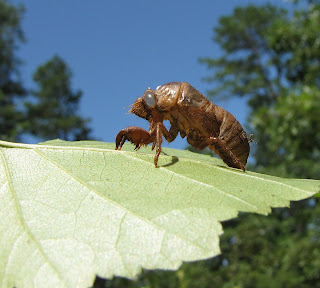