Indoor Insects of Autumn (part 1 of 4) 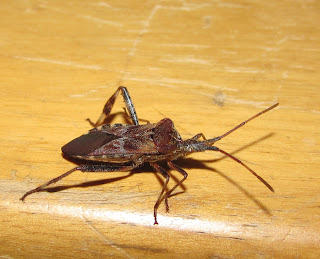 This is the first in a four-part series of entries addressing insects frequently seen indoors at this time of year when they seek shelter for hibernation during the colder months. This entry will introduce the “western conifer seed bug,” Leptoglossus occidentalis.

Western conifer seed bugs, despite their common name, now occur over the entire northern half of the United States and adjacent southern Canada. They were initially a truly western species, but have since spread eastward. They were first recorded in Connecticut in 1985, for example.

These insects, members of the “leaf-footed bug” family Coreidae, are frequently mistaken for “kissing bugs,” blood-feeding assassin bugs in the genus Triatoma in the family Reduviidae. Conifer seed bugs are not the least bit dangerous, however, feeding on the seeds and developing cones of pines and other conifers. The long hind legs of these insects, with the slightly flared “bell-bottoms” appearance of their “ankles,” are a good field mark to look for in trying to identify these true bugs.

The western conifer seed bug is a fairly large, conspicuous insect roughly twenty millimeters long, and it flies with a loud, droning sound that makes it intimidating and unwelcome as an indoor guest. Furthermore, they are equipped with a pair of scent glands on the underside of the thorax. The bugs don’t hesitate to deploy their defense when molested, emitting a permeating pungent odor that deters all but the most determined predators.

Leaf-footed bugs are not without their enemies, though, chief among them being tachinid flies in the genus Trichopoda. The female fly lays at least one white, dome-shaped egg atop its host where it cannot be easily wiped off. The egg is in fact firmly adhered to the bug’s exoskeleton. Adult insects are doomed when the fly larva hatches and bores into its host’s body where it lives as an internal parasite. Immature bugs (nymphs) may occasionally escape the fly’s assault if they molt the exoskeleton before the egg hatches, though the bugs cannot molt at will, only when growth demands it.

Human beings can best deal with the western conifer seed bug by excluding them from their homes. This means repairing worn weatherstripping on doors, fixing holes in window screens, and blocking off other openings where the insects might enter, such as where plumbing and electrical conduits enter or exit the residence. Should one of the bugs still make an appearance, simply usher it gently into a container and take it outdoors. Normally, these bugs hibernate in snug, natural places such as under bark on logs, in woodpiles, rodent nests, and similar niches. 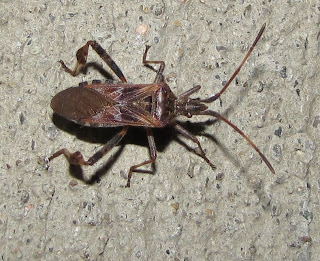