Madera Canyon in the Santa Rita Mountains is one of my favorite places to visit, so I was delighted to join other folks from the Southeast Arizona Butterfly Association (SEABA) for a Mother’s Day outing there on May 9. I even learned of additional trails that I was previously unaware of. Thanks to trip leader Gary Jue for a great time.

We had hardly gotten beyond the parking lot at the mouth of the canyon when someone spotted this lovely little Marine Blue, Leptotes marina. 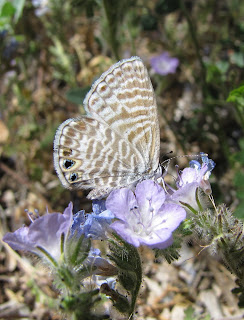 There were still many wildflowers blooming, but ironically that did not help us find many butterflies. What seemed to be more important was the fact that water was still flowing through the canyon.

Following trails to the rocky streambed led us to the creek where we found the wet sand and muck along the margins alive with “puddling” butterflies. Butterflies of many species (and the males in particular) will sip from wet sand and soil, taking up important minerals in the process. The butterflies usually excrete copious amounts of water as they sequester those nutrients. Males build up a reservoir of these substances that they then transfer to the female during mating. Perhaps those chemical compounds help to strengthen or nourish her eggs.

Among the sippers at the butterfly bar was this White-barred Skipper, Atrytonopsis pittacus. So oblivious are butterflies when they are imbibing at the stream bank that it is relatively easy to approach within inches of them. 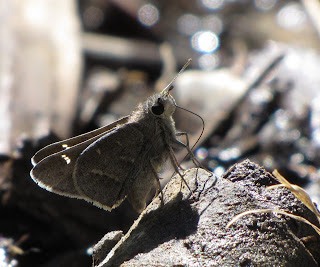 Streams and creeks also provide natural corridors or “flyways” for butterflies. Those species that utilize riparian trees and plants as hosts for their caterpillars have an added reason to be there. Males of those species often defend territories that include those host plants. Such is the case with the Red-spotted Purple (now considered one variation of the “White Admiral”), Limenitis arthemis. 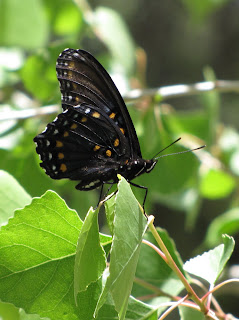 This male perched repeatedly, but the wind prevented too many photo ops. It would also periodically engage another male in aerial battles.

Butterflies were also present in the larval stage. One sharp-eyed SEABA member spotted this caterpillar of the Painted Lady, Vanessa cardui on the stalk of a thistle. 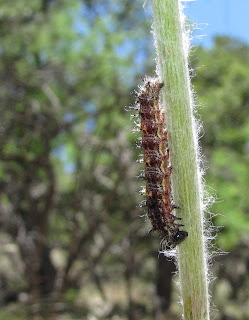 Crack butterfly authority Doug Mullins identified it in part by the silk webbing on the leaves of the thistle, created by the caterpillars to insulate them from the hot sun while they feed. Why any insect in its right mind would want to eat a spiny thistle leaf is beyond me. The caterpillar must hatch from the egg, take one look at the host plant and say “Gee, thanks, mom!”

We caught glimpses of plenty of other butterflies on the trip, including the Two-Tailed Swallowtail, Empress Leilia, Queen, Sleepy Orange, Orange-headed Roadside Skipper, Spring Azure, and Tiny Checkerspot. The last one I saw personally was worth the wait.

On my way down the trail to the parking lot at the top of the canyon I spied what I almost dismissed as “just” another Spring Azure. It didn’t look quite right, though, and indeed it turned out to be an Acmon Blue, Plebejus acmon, a common but very pretty little butterfly. 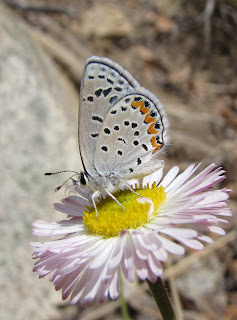 It took a great deal of patience on both my part and the insect’s before I was (permitted/able) to get a nice picture. Thank you Mother Nature, happy Mother’s Day in the grandest sense.