Among the most commonly encountered members of the “sand wasp” guild are the eight North American species in the genus Bicyrtes (By-SIR-teez). Two species in particular are widespread in the U.S. and adjacent southern Canada. They are much more sedate and easier to approach than most other members of the subfamily Bembecinae (family Crabronidae), and their predatory habits earn them some respect as well. 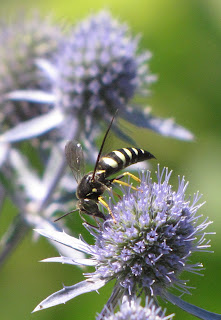 Female Bicyrtes actively hunt the nymphs of stink bugs in the family Pentatomidae as food for their larval offspring. The next time your child turns up their nose at Brussels sprouts, let them know it could be a lot worse. Actually, the accepted prey of these wasps includes equally odorous leaf-footed bugs (Coreidae), and shield bugs (Scutellaridae) and assassin bugs (Reduviidae) have also been recorded.

Wasps that burrow in the soil are termed “fossorial,” and a female Bicyrtes is an excellent digger. She can nest in soil of a more coarse texture than most other sand wasps. I imaged this Bicyrtes quadrifasciata excavating a nest in South Deerfield, Massachusetts in fairly rocky soil on the site of a former pickle factory, long since razed but with pavement fragments and pebbles in abundance. 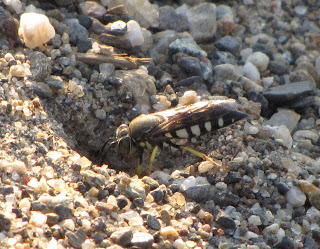 While many sand wasps nest in dense aggregations of dozens (if not hundreds) of individual females, I find that Bicyrtes tends to be more of a loner. The wasp uses a “tarsal rake” of spines on the segments of her front tarsi (“feet”) to tunnel about 15-20 cm down into the soil at a shallow angle. Depending on the species the burrow terminates in a single cell, or several cells branching from the main tunnel. She closes the burrow while she goes off hunting prey.

When returning from a successful hunt, the wasp uses subtle landmarks to relocate her hidden nest. Meanwhile, we can’t remember where we parked the car.

Most sand wasps practice “progressive provisioning,” feeding their larval offspring as they grow, but Bicyrtes stockpiles prey, laying an egg on the first victim to go into a given underground cell. Once she completes a nest, she sets out to repeat the process, having cached enough food ahead of time that she needn’t hang around to spoon feed her children.

Both male and female Bicyrtes are very fond of nectar, and become distracted enough at flowers that they can be closely approached. Look for them on the blooms of Dogbane (and the related Indian Hemp) as well as milkweeds, white sweet clover, wild carrot (Queen Anne’s Lace), and a variety of other weeds. 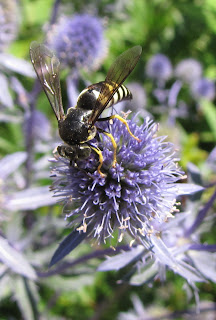 Bicyrtes can easily be told from similar wasps by the very boxy appearance of the back of the thorax. The angular hind corners of the thorax are often white. Plus, if you are able to get close enough to see that character, you are looking at something other than sand wasps like Bembix and Steniolia that stick around for about a millisecond before zipping off to parts unknown.

I leave you with a parting shot of a female Bicyrtes from Bentsen Rio Grande Valley State Park in Mission, Texas that I have yet to identify to species. Maybe one of you can solve the mystery. In any event, keep an eye out for these wonderful wasps that stick it to our stink bug foes. 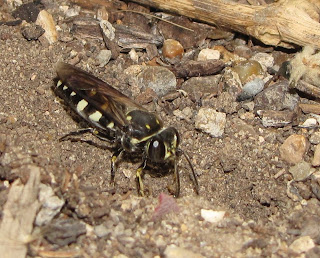