Without a doubt, one of the iconic animals of the Sonoran Desert is the tarantula. What would a Western, or desert horror movie be without a shot of one of these giant spiders moving leisurely across the landscape? Maybe a tumbleweed, too, though a Russian Thistle moves faster than a strolling tarantula. 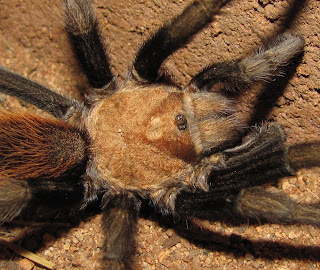 Tarantulas belong to the family Theraphosidae, and only the genus Aphonopelma is native to North America. There are 54 currently recognized species north of Mexico, and determination to species level is complicated by the fact that these are primitive animals in the evolutionary sense, with simple genitalia that don’t allow for easy comparison. That said, the most common species here in southern Arizona is the “Arizona Blonde,” Aphonopelma chalcodes.

It is mature male spiders that are most often seen crossing roads, especially at night, during the summer monsoon season. The male is easily recognized by his relatively lanky appearance, with a smaller abdomen and longer legs than the female. His front legs also have a spur on the underside of the tibial segment. The spurs are used to hold the female’s fangs at bay during mating. His coloration also differs from that of the female. His legs are entirely black, while the female has black femur segments with the remaining leg segments brown. 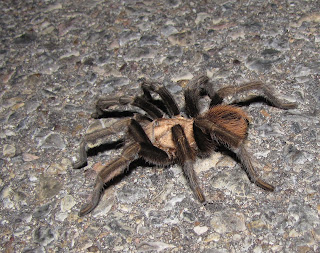 Both sexes live in burrows in the ground. Females rarely venture out, lest they become even more vulnerable to tarantula hawk wasps, and other predators such as coatimundi. An occupied burrow will have a thin curtain of silk over the entrance during the daytime. The spider will sit at the lip of its tunnel during the night, the better to ambush any unsuspecting insect or other small animal that comes within striking range. During the winter months the spiders plug their burrows with soil. Fat reserves sustain the spider during those lean months. 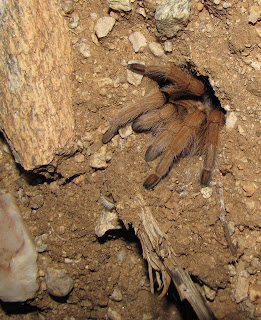 Tarantulas begin life as surprisingly small spiders, like the one below. Margarethe Brummermann found this specimen under a cow patty near Sunsites in the Dragoon Mountains. It takes a minimum of seven years for a tarantula to reach sexual maturity, and that is for captive specimens that receive regular meals and are otherwise provided with optimal conditions. 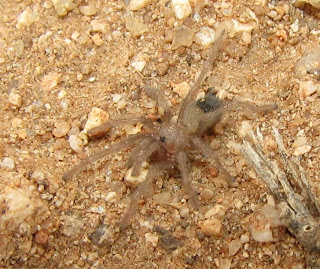 The black patch on the abdomen of the spiderling indicates special hairs that tarantulas use in self-defense. Rather than striking at an adversary with their fangs, our North American species literally kick themselves in the rear. Be careful if you see a tarantula doing this. It is dislodging short, microscopically barbed hairs that easily become airborne. These hairs, if they contact mucous membranes of the nose or eyes, cause extreme irritation. Some people may also have an allergic reaction, including a rash or other inflammation of the skin. Even a molt (shed “skin”) of a tarantula can bring about an allergic reaction in those people who are susceptible.

Tarantulas are among the very few spiders that continue molting after they reach adulthood. This process helps replenish those defensive hairs, and shed mites, other parasites, and dirt. Captive female spiders like the one shown above have been known to live as long as thirty years, but “wild” specimens likely don’t survive nearly as long. Males, after reaching adulthood, abandon their burrows in search of mates. After successfully breeding they usually die. 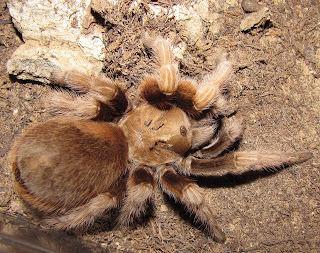 Members of the genus Aphonopelma are collectively distributed west of the Mississippi River and as far north as Missouri, Colorado, Utah, Nevada, and the southern two-thirds of California.