Just when you thought it was safe to take a bath….You throw open the shower curtain and are suddenly confronted with an eight-legged freak. Over the years I have answered many an AllExperts.com question about strange arachnids that people have found in the tub or stall, as well as finding my own specimens now and then. 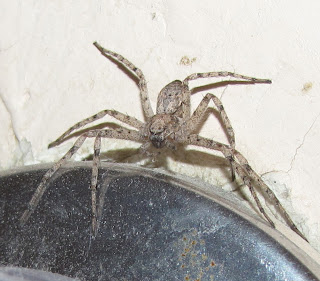 Recently, I was myself taken aback upon entering the shower and spying a particularly fine specimen of a Philodromus running crab spider on the wall behind my wife. I was startled, which in turn startled her, and we spent the remainder of the time with one eye on the spider. Naturally, Ms. Phyllis Dromus dropped lower and lower, eventually settling by the place where the shower head comes out of the wall.

I know what you are thinking. How can a manly-man like me, equipped with knowledge that allows him to identify most spiders, and who knows this one is not dangerous, still be uneasy? That isn’t what you’re thinking? Why are you laughing? Please, this is a family show. Get your mind out of the gutter. I think there are simply some places where we don’t expect to find spiders, and where we would prefer not to find them even if we normally appreciate and respect arachnids. No doubt the spiders feel the same way: “Gee, where do I have to go to get away from these monsters?! Uh-oh, it’s getting slippery!”

More recently, while attending the Mothapalooza event in Ohio, I prepared to step into the shower after a hot, sweaty field trip. Apparently, the tub had not seen much activity recently because there guarding the drain was a mature male Barn Funnel Weaver, Tegenaria domestica. I managed to snap one shot before trying to coax him into better viewing. That only drove him down the drain and though I was patient he never re-emerged. 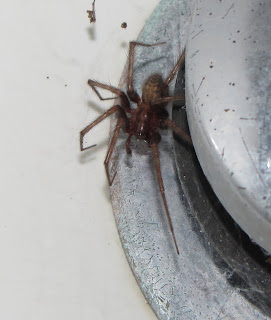 I still wanted to wash off before dinner, so I ran a light stream of water out of the faucet. Sure enough, Mr. Barn Funnel Weaver shot out of the drain with lightning speed. He was at the other end of the tub before I blinked. A few more pictures and then I corralled him in a plastic container to show off to folks later. Now, now, no jokes about which of us is better endowed. What are you, twelve? 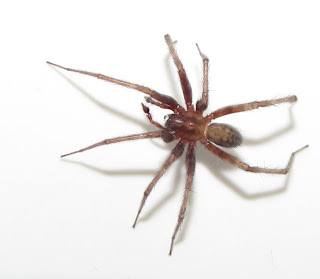 It is always a little easier for me to address someone else’s spider-in-the-shower experience than it is to chronicle my own, and I’m sure there will be plenty more such episodes crossing my e-mail or AllExperts.com account. I hope I am successful in calming people’s anxiety, allaying their fears, and otherwise turning fright into fascination. I always offer to accompany my female correspondents into the shower the next time, just in case….Funny, no one has ever taken me up on that.