It is Fly Day Friday, and I have been neglecting the Diptera for far too long. Last week, my wife Heidi and I were in Ohio where we saw many striking members of this order. Friday, August 23, we hiked the trail to Buzzardroost Rock, a preserve maintained by The Nature Conservancy in Adams County (south central Ohio). Near the top of the ridge we heard a loud buzzing and saw a large insect hovering in the sun near a large log. Periodically it would perch on a leaf or the ground and it was then apparent what it was: a flower fly in the family Syrphidae. This particular species was the spectacular Milesia virginiensis. 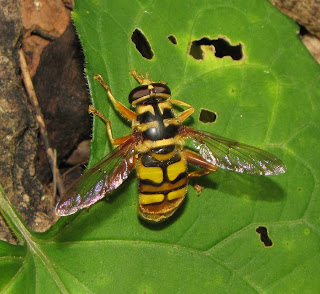 At 18-28.5 millimeters in body length, and brightly colored in yellow, brown, and black, this fly could easily be mistaken for a European Hornet or queen yellowjacket. The ominous droning buzz it makes only heightens the visual mimicry. Some speculate that this species mimics the Southern Yellowjacket, Vespula squamosa. Indeed, Southern Yellowjackets were also active in the area, but the workers are substantially smaller than this fly. It is too early for the yellowjacket queens to be appearing, but they make for a better “model” in both size and color pattern.

Milesia virginiensis figures in American folklore and superstition. It is still known in many hamlets as the “News Bee,” for it will sometimes hover in front of a person, as if it were “giving them the news.” It is also considered to be good luck if one of these flies alights on your finger. I was surprised that this particular individual allowed me a very close approach, so maybe it is not out of the realm of possibility than one of these insects could perch on a patient person.

Perhaps the idea of these flies broadcasting the local gossip stems from confusion with real bees. Another old wives’ tale suggests that a bee buzzing in one’s ear means that important news will arrive shortly. 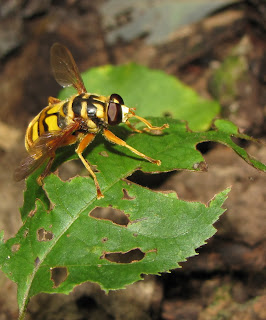 Larvae of the News Bee apparently feed in the wet, rotting heartwood of stumps and logs, which might explain why this adult fly showed so much interest in the log. Males might recognize a log as a potential resource for females to lay eggs in, and guard a territory around it.

This species is found throughout most of eastern North America, from Kansas to Minnesota and Ontario, south to Texas and Florida. Nowhere does it seem to be abundant, however. Look for the adults from late May to November in southerly latitudes, and mid-summer to early fall elsewhere. Two other species in the genus, M. bella and M. sctutellata range in the southwest U.S. and southeastern U.S. (southeast Oklahoma to North Carolina), respectively.

Milesia virginiensis is also known as the Yellowjacket Hover Fly and the Virginia Flower Fly. While there are records of them visiting Queen Anne’s Lace, Rattlesnake Master, and other wildflowers, I personally have not seen them nectaring. Almost invariably, I find them hovering in sunny spots in the understory of hardwood forests. 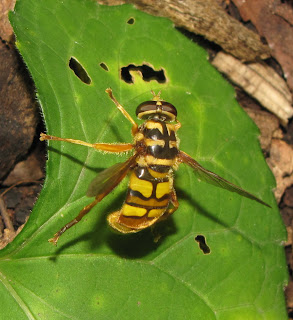