Heidi and I had the pleasure of going on a hunt for tarantulas on Labor Day, September 7, with Megan Miller, Jordan Spalding, and Bell Mead. Thanks to Ryan Nefcy, we learned of a location in Pueblo County, Colorado where one can reliably find tarantulas, genus Aphonopelma. Not only did we have success, but we found some other spiders, too, as well as some spectacular grasshoppers. 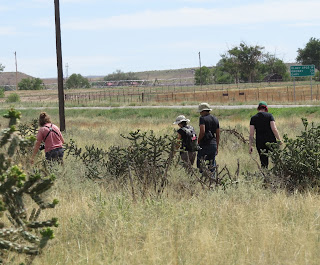 There are at least four species of tarantulas found in Colorado, and although we suspect the ones at the Pueblo County location are Aphonopelma hentzi, we would need to perform invasive procedures on a spider's genitalia to know for certain. The single specimen Megan collected is alive and well as we speak. 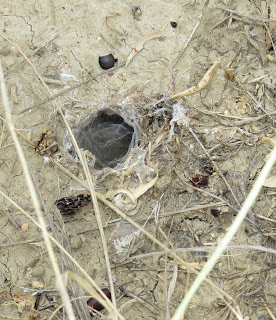 Bell has a keen eye for detecting tarantula burrows, which are surprisingly small and cryptic, hidden among tangles of desert grassland vegetation. Occupied burrows are covered with a thin film of silk by day. Sometimes, the remains of insect prey are scattered around the burrow entrance, too. Still, it takes skill to spot the holes. 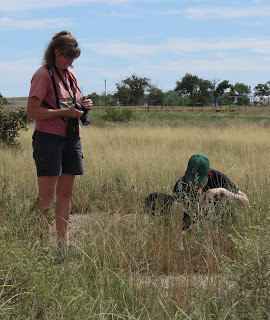 Bell "fishing" for a tarantula while Heidi looks on

It takes even *more* skill to "fish" the occupant from her lair. Bell is highly skilled at this, and Jordan was able to capture the procedure in a video. Everyone was shocked to see such a large arachnid erupting from such a small tunnel. Whether a given spider is mature or not is difficult to assess. Male specimens change drastically in appearance upon their final molt into maturity, but females do not; and tarantulas are among the very few spiders that continue to molt after they reach adulthood. 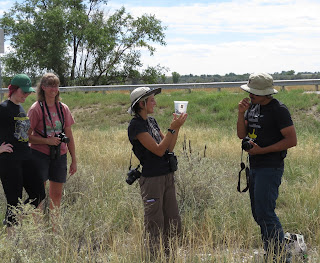 Megan admiring the spider that Bell fished out 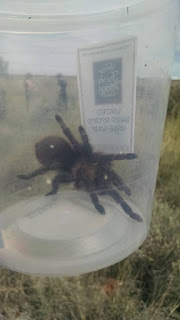 Upon returning home, Megan set up a spacious terrarium to house her new friend. Since tarantulas are in high demand in the pet trade, we agreed that we would not disclose the exact location that we visited. We thank Ryan for sharing his "spot" even with us. Thank you for trusting! 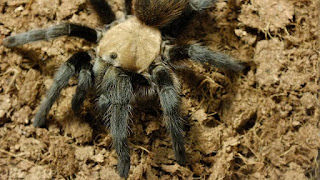 We found three occupied burrows altogether, but could only lure the one spider out. We did find other kinds of spiders, though. Before we had even ventured from the vicinity of our parked cars, we came across a lovely orange jumping spider, Phidippus apacheanus. It is thought that this species might mimic velvet ants, wingless female wasps that pack a very painful sting. They certainly share the wasp's bright "warning colors" of black and orange. 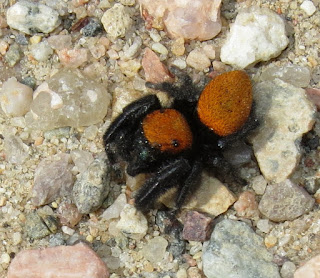 There were also Western Black Widows, and two kinds of orbweavers. This Banded Garden Spider, Argiope trifasciata was a highlight of the trip. Despite her size she was difficult to spot in her web in dense, tall grass. 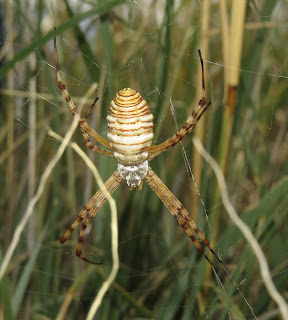 Heidi had an easier time noticing another giant, a female Black and Yellow Garden Spider, Argiope aurantia. This species seems to prefer slightly more "open" situations, but still build their webs relatively close to the ground. Both species of Argiope can easily handle grasshoppers and other large, strong prey that become entangled in their snares. 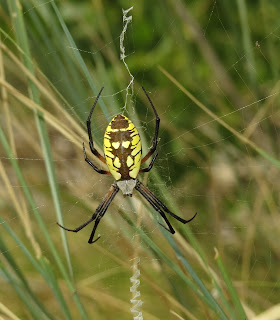 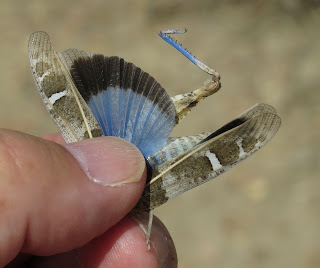 As we were leaving, Jordan suddenly jumped and exclaimed that a very large insect had collided with him after it leapt from the ground beneath his feet. Upon investigating we found a spectacular female specimen of the Green Bird Grasshopper, Schistocerca shoshone. This was the first one I have seen in Colorado. 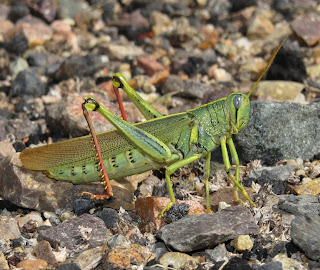 We concluded our expedition with a well-earned visit to the Dairy Queen back along the interstate at Pueblo. As we sat down I noticed a small spider on the outside of the window. Tired and hungry, I nearly dismissed it as "just another orbweaver." I am glad I took time to double check. It was a mature pirate spider, family Mimetidae, perhaps Reo eutypus, though I can't be positive. You just never know *what* you will find, or where you will find it! Many thanks to my partners in crime. You all rock. 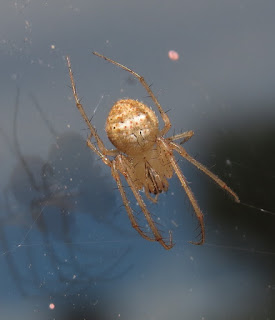 Pirate Spider from Dairy Queen
Posted by Bug Eric at 7:00 AM