This has been an exceptional year for paper-making social wasps in the family Vespidae here along the Colorado Front Range. Most species of paper wasps and yellowjackets have been unusually abundant, much to the consternation of the average person who despises any stinging insect. However, there is much to admire about these industrious organisms, not the least of which is the amazing architecture of their nests. 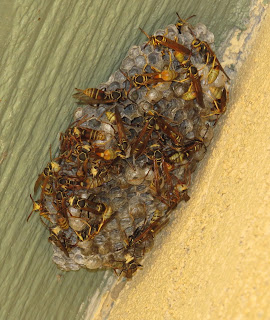 Nests of most social vespids are made of repurposed or recycled cellulose from dead, woody plants and trees. The wasps manufacture the paper by scraping fibers and chewing them into a ball of pulp that is taken back to the nest and applied as a thin strip that soon dries into a surprisingly durable, stiff material.

Paper wasps in the genera Polistes and Mischocyttarus here in Colorado make exposed paper combs that are frequently suspended under the eaves of buildings. Yellowjackets, including the Bald-faced "Hornet," Dolichovespula maculata, house their combs within a layered paper envelope. Species in the genus Dolichovespula build their nests above ground, usually in a tree, shrub, or among berry canes. Species in the genus Vespula normally build their nests underground in abandoned rodent burrows and other pre-existing cavities that they can expand by excavating around the nest. 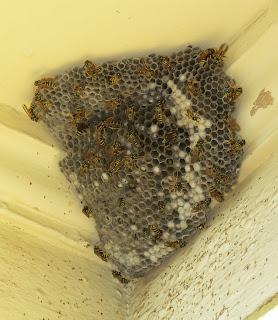 I was surprised to find out that paper wasps will re-use old nests! One particularly impressive nest of European Paper Wasps (Polistes dominula) is situated under an overhang at my workplace in Colorado Springs. It appeared abandoned when I first started work there, but was quickly occupied and even expanded later in the season. This is an impressively large nest that would probably not fit on a dinner plate, very unusual for any species of Polistes.

I also discovered an active nest of the Bald-faced Hornet in North Cheyenne Cañon on August 21. Fortunately, it was far enough off the trail to not be a potential hazard to the many people that use the park; and far enough off the trail to make it difficult for anyone to destroy the nest. I went back a month later (September 18) and found the wasps had expanded the nest and changed its shape from oval to a roughly football shape. There was no evidence of activity, and indeed the colony cycle for this species is shorter than that of other social wasps. 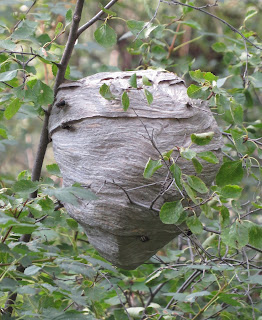 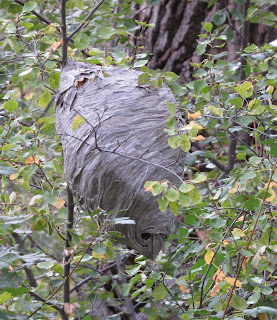 The same nest on September 18

Underground nests like that of the Western Yellowjacket (Vespula pensylvanica) and Prairie Yellowjacket (V. atropilosa) are more problematic because one can easily disturb an unseen nest with painful results. I only notice nests when my eye catches a steady stream of yellowjackets coming and going from a common point.

Paper wasps are generally welcome predators of caterpillars and other soft-bodied insect pests. The Bald-faced Hornet is a predator of flies that is never a pest at picnics and barbecues. The same is true of the Prairie Yellowjacket. Meanwhile, the Western Yellowjacket is a scavenger that will take your lunch away from you given the opportunity. Gently waving your hand can eventually discourage the wasp's efforts. 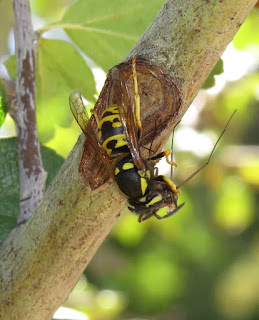 We may have these wasps to thank for inspiring the invention of the paper that we use today. At least some accounts trace observations of wasps in ancient China to the origins of human papermaking.