Are We Saving Species by Rescuing One Individual Bug?

NOTE: I had to change the original title of this post because, believe it or not, it is a trademarked phrase! The owner of said patent/copyright informed me of this on September 17, 2019 and asked that I remove the title.

Increasingly, thanks to social media, I am struck by how many people attempt to save individual insects they find injured or lethargic. On one hand this empathy for other life forms is encouraging, but on the other hand the energy investment is grossly misplaced. 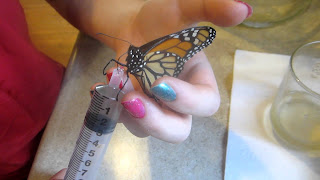 The problem is that the media has painted honey bees and Monarch butterflies in particular as highly vulnerable if not on the brink of extinction. The implied message is that every individual of these species needs protection in every way possible! Consequently, people spend more time "rescuing" individual specimens than in protecting or creating habitat, working to curb pesticide use in their community, or engaging in other strategies that would have a far greater impact on improving the health of the entire species.

Another problem is that most people are not knowledgeable enough to recognize when a given insect really is in trouble. The wrong assessment happens over and over with bees in particular. Bees often become inactive when it gets too cold for them. They rest on whatever object is available and often this is a more conspicuous spot than normal. A good Samaritan human believes the insect is in peril and needs the equivalent of a sugar-water IV, stat! No, it does not.

Further, in late summer and fall, chances are you are saving a male bee, which is even less useful. Male bees live a short life in which their only purpose is to mate with a female. They do not possess pollen baskets, so are less effective pollinators than female bees.

Another aspect of life that we forget is that insects, like any organism, are prone to developmental problems that cannot be overcome. Improper emergence from a chrysalis will leave a butterfly crippled beyond repair. It happens. Insects reproduce in large numbers to overcome those deficits. Insects are incredibly durable once they mature, and losing half a wing barely slows down a butterfly or a bee. We should be in awe as much, if not more, than in sympathy, let alone pity.

Ok, so last month my wife and I were on vacation in Cape May, New Jersey, and we happened upon a Monarch trapped in a spider web. We intervened. It was a quick fix, simply disentangling the insect and sending it on its way. The whole investment was maybe forty seconds. We understood the insect could collide with a vehicle later that same day. Our expectations for the survival of individual insects are low, given our knowledge of their biology.

Contrast that example with an online video that shows how to mend a broken wing on a Monarch. More than a few such organizations have exploited the "sky is falling" scenarios centered on the Monarch, and one has to question the motives of some of them. Yes, older, established conservation organizations use overly alarming narratives, too, but the best ones measure their tone and can point to historic successes in legislation and habitat protection.

You want to curb insect mortality? Then give up driving. For every insect you nurse back to health, you kill dozens, if not hundreds in the course of operating your motor vehicle. Even bicyclists take their toll. I have seen countless insects mortally wounded, or crushed, on bike paths.

Basically, insects are better served by actions aimed at enhancing habitat health, and planting native vegetation in the landscape of your own property where you are able. Tear out the lawn, or most of it, and do your best to mimic the natural ecosystem where you live. Want to go a step farther? Start a dialogue with city and county officials to restructure weed ordinances and other codes that currently restrict the ability of homeowners to plant for wildlife. Educate your homeowners association to make those communities more wildlife-friendly without compromising safety and property values.

Also, stop insisting that one species is somehow more worthy of our attention than any other. Stop categorizing insects as "friend" or "foe." Such distinctions do not apply to the overwhelming majority of life on this planet.

Be proud of yourself for having empathy for other living things; but, channel that into something that will make a difference beyond the individual insect or arachnid. Do intervene for birds, mammals, reptiles, and amphibians, all of which have far longer lifespans than invertebrates, but make sure you do it legally and correctly. Carry on.