South Cape May Meadows in Cape May, New Jersey is a property managed by The Nature Conservancy (TNC) for birds and other wildlife. Near the parking lot stands a shed that itself is something of a refuge for a whole community of insects. One wall, facing west and with beams that make something of an overhang or trellis, is being worked over by the Eastern Carpenter Bee, Xylocopa virginica. The abandoned nests of these solitary bees are then used by mason wasps, leafcutter bees, and other solitary Hymenoptera. 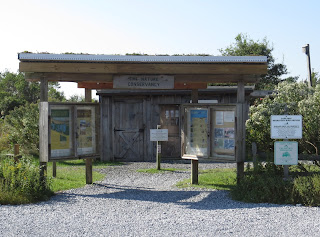 The shed at South Cape May Meadows, behind the arbor entrance

During our visit this past September 24, we noticed the holes, then soon saw females of the Four-toothed Mason Wasp, Monobia quadridens, exploring some of those cavities. I wrote about this species previously, detailing its life cycle, but this was the first time I had observed them coming and going from nests. 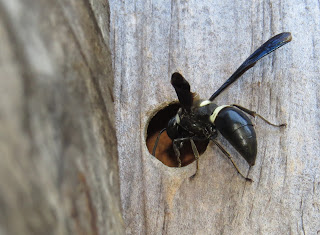 One female delivered a paralyzed caterpillar during our observations. It was a surprisingly small larva given the size of the wasp, but then she caches several victims in each cell before laying a single egg, putting up a partition of mud, and then starting a new cell along the length of the tunnel inside the wood. 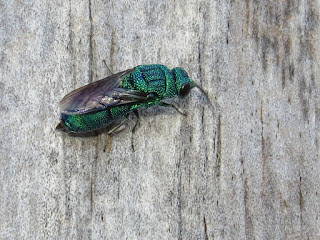 One might think that nests in such solid material would be impermeable to parasites, but not so. We watched a brilliant blue-green cuckoo wasp, Chrysis sp., investigate some of the holes for occupants. Given a nest in progress, she would infiltrate and lay her own egg inside. Her larva would then consume the prey items left by the rightful owner for its offspring. Cuckoo wasps are nearly impregnable, with a very dense exoskeleton that deflects the bites and stings of host wasps. Cuckoo wasps can roll into a ball to further protect themselves. 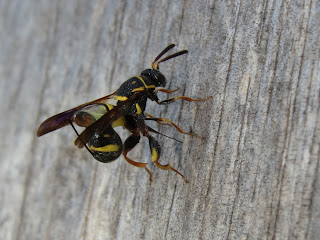 A less common parasitic wasp also came to the wall. Leucospis affinis is a large chalcidoid wasp. The female is easily recognized by the whip-like ovipositor that curls over the top of her abdomen. The ovipositor is the organ she uses to lay her eggs....by drilling through the solid wood directly into one of the cells of her host. How she divines the location of a host larva through a layer of dense cellulose is a mystery to me, but her aim is usually true. 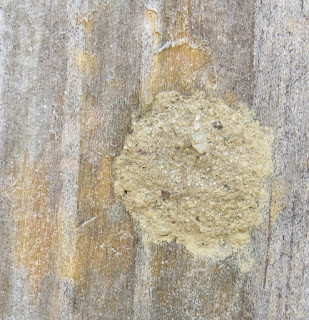 A completed nest of a mason wasp is usually identified by the mud plug that closes the entrance to the hole in the wall. Because the soil at Cape May is essentially all sand, it was difficult to tell if we were looking at a sand closure or a sawdust closure that would be the work of one of the carpenter bees. 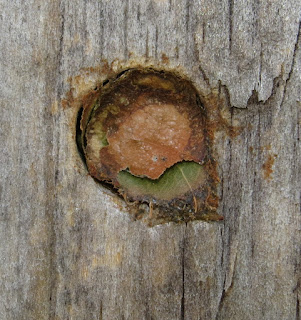 Easier to identify was the completed nest of a leafcutter bee, genus Megachile. Leafcutter bees snip oval pieces from leaves of living plants and fashion those clippings into barrel-shaped cells that they stack along the length of a tunnel in wood, or underground in the case of a few species. The female bee then cuts at least one perfectly circular leaf fragment that serves as a "lid" for the completed cell. 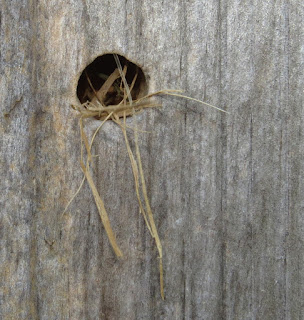 We found one hole filled loosely with bits of grass, and we surmise this was the work of yet another kind of wasp, the grass-carrier. These solitary wasps, related to mud daubers in the family Sphecidae, use dry grass to fill, and/or partition, and plug their nest tunnels. Near Cape May Point State Park we did witness a female Isodontia mexicana select and bite off a dry grass stem to take back to her nest, so we know these insects were active. 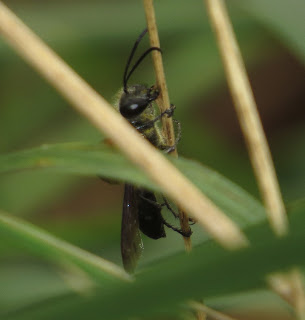 Ironically, one other kind of wasp was tearing the wall down one mouthful at a time. Workers of the Bald-faced Hornet, Dolichovespula maculata, would alight on the wall and begin chewing off wood fibers to mix with their own saliva. This creates a pulp that they use to make durable paper nests. Looking more closely at the wall we realized that the scores of yellow streaks on the otherwise weathered gray wooden surface were where yellowjackets (of which the Bald-faced "Hornet" is just another species) had stripped fibers for use in building their nests. 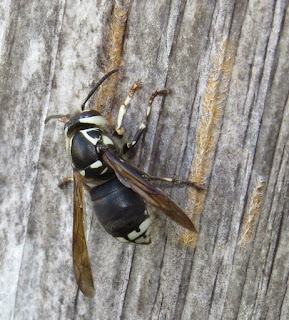 No doubt, earlier in the season there would be even more activity around this wall. The shed is still standing, sturdy as ever, so the insects are not doing much, if any, structural damage. Please consider that if you find that your own shed is becoming home to carpenter bees and other insects. You may find yourself as enthralled as we were by the little ecosystem started by carpenter bees. 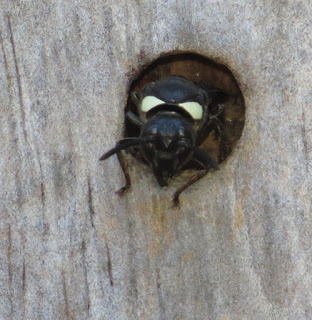