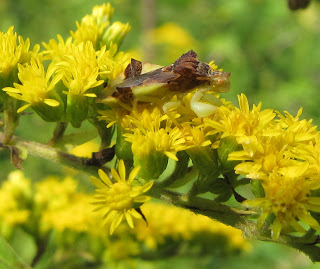 Goldenrod has been flowering for several weeks now here in western Massachusetts, as it has been over most of North America. The blooms attract an incredible number of bees, wasps, flies, moths, and butterflies that come for the nectar, but one other insect stakes out goldenrod to make a meal of those other visitors.

Ambush bugs, once placed in their own family Phymatidae, are squat, diamond-shaped insects now considered members of the Reduviidae, collectively known as “assassin bugs.” Fortunately, the only thing ambush bugs assassinate is other insects.

Colored in shades of yellow or cream with darker markings, ambush bugs are well-concealed among the buds and blossoms of a variety of flora. Often the only indication of an ambush bug’s presence is its prey: another insect posed motionless in an awkward position among the petals of a flower.

Ambush bugs seize their prey with amazing speed and strength. The entire adult insect is only about ten millimeters in length, but what they lack in size they make up for in muscle power. Their front legs are “raptorial,” heavily modified like a praying mantis for grabbing and holding a victim. The femur is heavy and almost club-like, while the tibia is blade-like. The two leg segments fold against each other like a jack-knife against its handle.

The attack is so forceful as to be an audible “snap.” Sometimes the bug literally bites off more than it can chew. I once saw an ambush bug attack a hovering leafcutter bee. The startled, retreating bee literally yanked its attacker off the flower and the bug was forced to abandon its effort and fly off to another flower to try its luck again.

While the bug’s grip is so strong that it can often subdue a victim with only one front leg, it is the bug’s bite that ultimately dooms its prey. 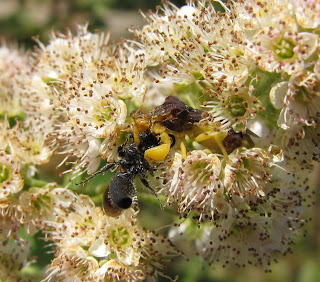 Beak-like mouthparts deliver saliva containing paralytic compounds and enzymes that pre-digest the meal from the inside out. The ambush bug then sucks up the liquefied contents, leaving the prey insect as an empty exoskeleton.

Female ambush bugs are larger and heavier than the males, and able to snatch larger prey items. This fact has not been lost on the smaller sex, and males will ride piggy-back atop females, sharing in the female’s successful kills. 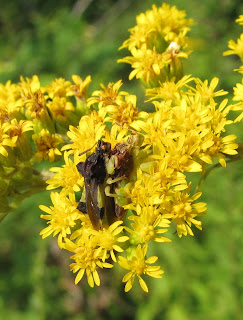 Such couples may or may not end up as a mating pair, and given the male gender’s freeloading tendencies, it seems a wonder they reproduce at all.

It is not just another ambush bug that might share in the spoils, though. Tiny flies of the family Machiidae will congregate like vultures at the scene of the crime, lapping up any tasty liquids oozing from the deceased. 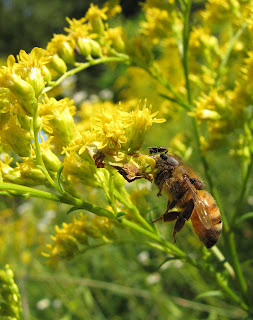 Our most common and widespread North American ambush bugs are in the genus Phymata, of which there are at least seventeen species. Look (carefully) on almost any flower at this time of year and you may be surprised to find one of them lurking there.