Remember the “Carpet Cocoon” story I did back in March, and the one on the “Carpet Caterpillar,” too? Well, the story has come full circle now.

Sometime last night, an adult moth emerged from the pupa that the caterpillar formed in the yogurt cup I had it in. I remember thinking that I needed to put a paper towel or tissue around the inside of the smooth cup so the moth could climb up and fully expand its wings for a successful molt. Naturally, I had the lid off the cup, covering a small, live beetle on my drafting table last night….So, this is what I found this morning: 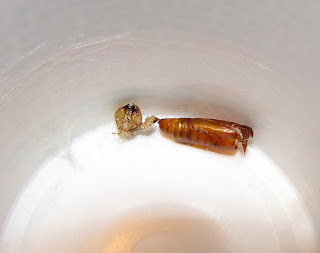 An empty cup, with a now empty pupal case (and caterpillar head capsule at the left). No moth to be seen anywhere. Terrific. I looked high and low, and finally, by sheer luck, discovered the surprisingly large, perfectly healthy moth tucked neatly in the door jamb of the front door, at about ankle level. It had managed to eclose (the scientific term for emerging as an adult insect from a pupa) perfectly, in the most imperfect circumstance, with no further intervention from me. Astounding.

The comments I received on my initial post about the caterpillar were mostly directed to my assertion that the moth was nothing much to behold. I only had images from BugGuide.net to go by, and I was not impressed. Suffice it to say that seeing the living creature has changed my opinion. It seems to have actually transformed the carpet fibers into the shimmering scales on its wings. 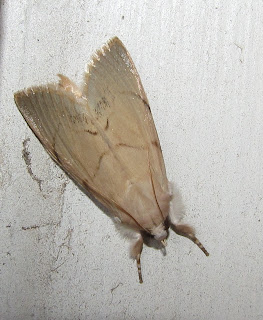 I had errands to run today and was in and out of my apartment frequently. On the last, late afternoon return home, the moth flew out the door. Ah, freedom! Well-deserved, too, I might add.