My last entry on cuckoo wasps prompts me to pen (keyboard?) a complementary article on the metallic green solitary bees that are frequently mistaken for cuckoo wasps. Indeed, to the untrained eye they appear essentially identical, so how do you tell the difference? 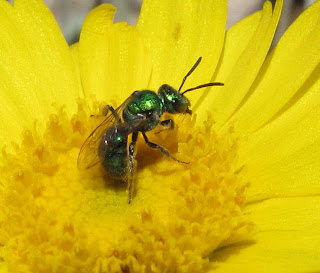 Perhaps the best way to tell cuckoo wasps from those metallic members of the solitary bee family Halictidae is by behavior. Consider this:

Both cuckoo wasps and “sweat bees” are fond of the liquid waste products (honeydew) of aphids and scale insects. I once found a huge number of sweat bees on a small, infested oak tree in Cincinnati, Ohio.

How the different insects move about is also telling:

Both the wasps and the bees will sometimes pause to preen themselves, usually resting on a sunlit leaf to do so, but the bees generally take longer to do this than the wasps do. Male sweat bees will perch on leaves and stems to watch for passing females.Appearance of the two insects is often not sufficient to distinguish them from each other, but if it has pollen on its hind legs it is not a cuckoo wasp. Only female sweat bees collect pollen, using brushes of hairs called “scopae” on the hind legs to store the grains for the trip back to the nest burrow. 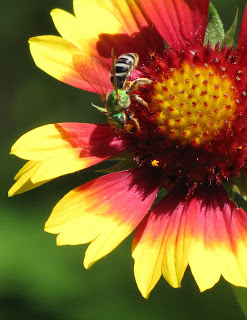 There are several different genera of metallic green bees in the Halictidae family, their relative abundance changing somewhat with geographic location. The most widespread and easily recognized may be those in the genus Agapostemon. Male Agapostemon species have only the head and thorax metallic green. The abdomen is banded in black and yellow pigments. Females of Agapostemon virescens have a black abdomen with bands of white hairs (see image above). Females of most other Agapostemon are wholly metallic green, but also rather hairy.

More confusing are members of the tribe Augochlorini (image immediately above, and below). The three genera in this tribe, Augochlora, Augochlorella, and Augochloropsis are virtually identical. Unless you are already an expert on them, you have to collect a specimen and put it under a microscope to deduce which genus it belongs to. All are bright metallic green, blue-green, though the common eastern U.S. species Augochlora pura is frequently brassy, coppery, or bronze in color.

The nesting behavior of the sweat bees is quite remarkable as well. While cuckoo wasps have no nest, instead seeking the nests of other solitary wasps where the female cuckoo lays her eggs, sweat bees excavate burrows in the soil (or in rotten wood in the case of Augochlora). Consequently, both cuckoo wasps and sweat bees can sometimes be seen investigating cavities in dead standing trees or logs. 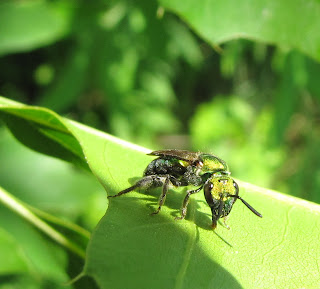 The genera Augochlora and Augochlorella include at least some species that exhibit communal nesting or primitively social biology. This is also true of Agapostemon virescens, where several females may share one nest entrance. I remember discovering a nest of this species in a neighbor’s yard in Portland, Oregon when I was a child. I would spend hours watching the females come and go, and the “guard” bee pop its head out of the single nest entrance atop the little mountain of excavated soil (“tumulus” as scientists call it). Sometimes she would come almost completely out of the nest, looking around anxiously for signs of danger.

It is difficult not to assign such insects as “heroes” or “villains,” or ascribe human personality traits to them. They are very captivating organisms once you get to know them. Do enjoy watching them, and share your observations where you are able. There is still much to learn about them. Given our changing environment and climate, chronicling the adaptations of bees and other organisms will be paramount to successfully protecting them and the pollination services they provide to plants.