One of the most beautiful species of thread-waisted wasps is Ammophila aberti, found commonly here in southern Arizona. It actually ranges throughout western North America, east as far as Iowa, and south into Mexico. These sleek, silvery wasps are a little larger than the average Ammophila, approaching the length of A. procera, but not nearly as robust. 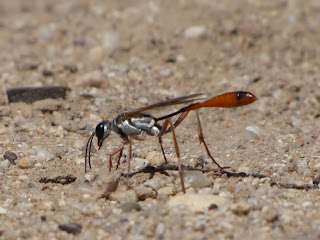 I was fortunate enough to come across a fairly large nesting aggregation of this species at Ft. Lowell Park in east Tucson on May 11, 2009. The female wasps were digging in a very flat area with hard, baked soil. They would literally take bites out of the earth in order to excavate their nests. Despite the abundance of wasps, it was still a challenge to get images of them. The wasps would dig a bit, fly up, settle again, and repeat the process. Consequently, I had many images with no wasp in sight! 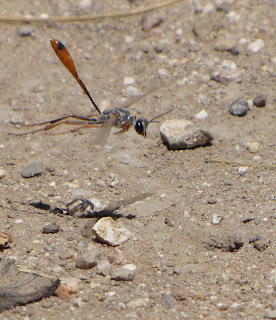 It turns out that the nesting behavior of Ammophila aberti has been well documented. One study revealed that females may initiate more than one nest at a time. Some had simultaneously started eight different burrows, up to a dozen for one ambitious specimen. Few of the nests were finished, however. Could they be creating “dummy” nests designed to confuse parasites like velvet ants that will dig open the nests of their hosts? That would be an ingenious ploy if so.

It may also take a female wasp a long time to furnish food for its offspring. A single egg is laid on the first caterpillar to be stored in the cell at the end of the vertical or angled burrow. By the time the last caterpillar is hunted, the larva from that egg may be reaching maturity. This has been interpreted by some researchers as progressive or “delayed” provisioning, feeding the larva as it develops, but clearly this is not the case. It may simply take some female wasps longer to find a full complement of caterpillars. Also, prolonged inclement weather may delay hunting activities for the females. Lastly, temporary scarcity of prey may delay the ability of the females to find caterpillars.

Ammophila aberti might be considered something of a generalist in that it uses a wide variety of Lepidoptera species in provisioning its nests. The study cited above recorded caterpillars from five different families of moths and butterflies (and skippers) used by this wasp: Geometridae, Noctuidae, Pyralidae, Hesperiidae, and Pieridae. An average of about six caterpillars per nest was the norm for the Colorado study of this species.

Another trait exhibited by this species is prey-stealing from other wasps in the nesting aggregation. A female returning to her nest is vulnerable to robbery since she must put down her caterpillar catch to open the temporary plug on her burrow. She may be attacked by one or more others of her kind that try to wrest the caterpillar from her. The hijacking is frequently successful. Further, some wasps may actually dig open the nest of another wasp and pilfer the paralyzed cache, though this is a rarer phenomenon. 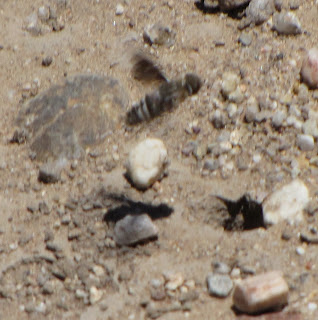 As is the case with most other fossorial (burrowing) wasps, satellite flies (Sarcophagidae: Miltogramminae) are a constant threat to parasitize the nest. Interestingly, I observed another potential parasite in the form of a bee fly, Thyridanthrax sp. The female flies were hovering over the open nests of the wasps, lobbing eggs down into the tunnels in the manner of a jet bomber. Thanks to Joel Kits for making the identification from the above image, originally published on Bugguide.net.

Clearly, there is still much to be learned about this, and the vast majority of other species of solitary wasps. So, next summer, resolve to get out and make your own observations. You are almost guaranteed of making groundbreaking contributions to our collective knowledge. Meanwhile, have a very happy Thanksgiving holiday. Good luck provisioning your table with things more appetizing (and hearty) than caterpillars  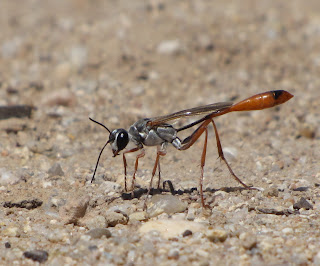