It probably became apparent several postings ago that the vast majority of insects have no “common name” in English. Today’s featured species, Ammophila femurrubra, is no exception. In fact, information on this handsome wasp seems to be lacking as well.

Little in the way of research funds and scientific attention is lavished on most insects unless they are of economic importance (read “pests”). You could argue that Ammophila thread-waisted wasps that prey on caterpillars in agricultural settings actually *are* economically important, but in a good way. Most administrators and bureaucrats that dole out research dollars don’t seem to be convinced, however. Consequently, any observations and documentation on such solitary wasps is usually executed voluntarily by “amateur entomologists” that in today’s language we call “citizen scientists.”

Chief among the pioneers to illuminate the biology of solitary wasps were George and Elizabeth Peckham, whose ground-breaking work Wasps, Social and Solitary (Archibald Constable and Company, Ltd., 1905) set the standard for their American followers. Phil and Nellie Rau, who published Wasp Studies Afield in 1918 (Princeton University Press), continued the Peckham’s legacy. There was also Edward G. Reinhard, author of The Witchery of Wasps (The Century Company, 1929); and John Crompton, who penned The Hunting Wasp (Houghton Mifflin Company, 1955). We also owe a debt of gratitude to the reigning champion of popular entomology, the late Howard Ensign Evans. His masterpiece Wasp Farm (Natural History Press, Doubleday, 1963) remains an inspiration to my own writing and love of the Hymenoptera. Still, Evans is best known for his book Life on a Little-Known Planet (Dutton, 1968), easily the best popular book on insects ever published. 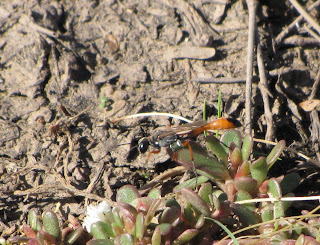 So what does this have to do with Ammophila femurrubra? It means we need another Howard Evans to investigate the biology and behavior of this species. All I was able to determine in my research is that the species ranges in the “southwestern U.S.” How enlightening. My personal observations would tend to reinforce the idea that it is typical of the genus, even “sleeping” in the manner of other Ammophila. It is one of the more common species in urban Tucson, so perhaps it is more adaptable to habitat fragmentation than other species. At about 25 millimeters in length it is of average size for the genus, too. 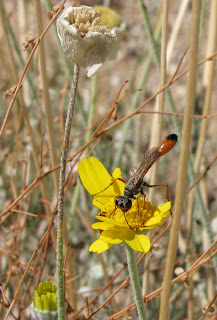 As always, I encourage all of you to be observant and record your observations if possible. You really never know what you are adding to our collective body of knowledge.