Caught on the Wing

In the nearly two years I have been taking digital images of insects, I have managed to capture, largely be accident, a few insects in flight. The resulting images reveal that insects are far from fragile, but definitely agile.

For every shot I get of an insect winging its way out of the picture frame, I get at least as many of flower without fly, or rock without wasp, the perches long since vacated by the insects, if that only means by a millisecond. And that happens when I’m trying to capture an image of a stationary insect!

I can’t imagine trying to capture insects in flight on purpose, but that is exactly what some photographers have been able to do regularly. Stephen Dalton, and English naturalist and photographer, was perhaps the first to successfully document different insects in flight. His book Borne on the Wind (Reader’s Digest Press, 1975) remains a classic. Another Englishman, Dr. John Brakenbury, published Insects in Flight in 1992 (Blandford, a Cassell Imprint). Both men achieved their success under largely controlled circumstances, rather than outdoors in “the wild.” Still, the resulting images are breathtaking, and highly informative about the physics of insect flight.

I’m happy to simply communicate the fact that some insects *can* fly. Many people are unaware that most beetles can fly, so having an image like this one of a blister beetle (Lytta auriculata) taking off is helpful in illustrating that beneath its wing covers a beetle has membranous wings it uses to fly. 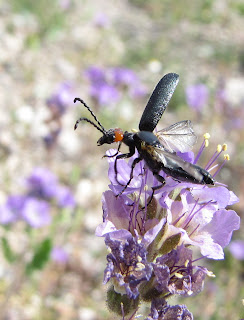 Sometimes I can even capture courtship behavior, like between these two Golden Longwing butterflies, Heliconius hecale, native to Central America but performing locally in “Butterfly Magic” at the Tucson Botanical Gardens.

Here, the male is making hovering overtures to a female that is unreceptive. She signals this by essentially mooning him. Yeah, I used to get that a lot, too, dude….

Most of the time, I get images of insects arriving at, or departing from, a flower, or other perch. Here are a few examples: 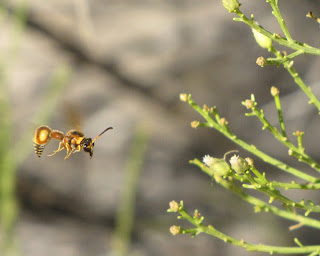 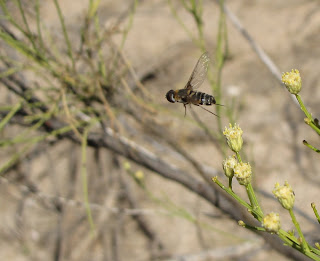 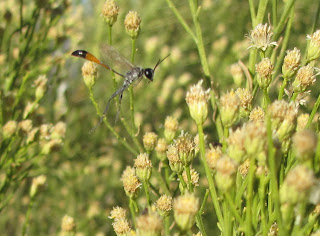 Insects are the undisputed evolutionary pioneers of animal flight, so it should come as no surprise that they are masters of aerial maneuvering, speed (at least for their size), and durability. Even the butterflies banging their way around indoor butterfly exhibits are barely slowed down despite what one might consider devastating damage to their wings.

We stand to prosper by continuing research into insect flight. How can a dragonfly manufacture turbulence, something deadly to a fixed-winged aircraft, and then use that turbulence to generate lift? Imagine the possibilities if we could duplicate the intricacies of insect wing movements in our own planes and helicopters. Maybe we, ourselves, could ultimately float like a butterfly…. 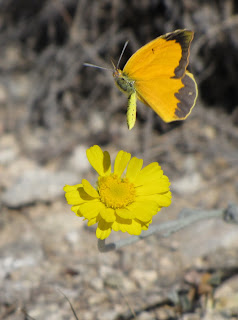 Sleepy Orange, Eurema nicippe
Posted by Bug Eric at 6:00 AM