One of the most common, and most handsome members of the genus Ammophila east of the Rockies (and south to Mexico City) is A. pictipennis. It is black in color, with red on the abdomen, and the black areas have metallic blue reflections in the right light. The wings are orange or yellow. The orange wings and lack of any silver bars on the side of the thorax help identify the species easily. 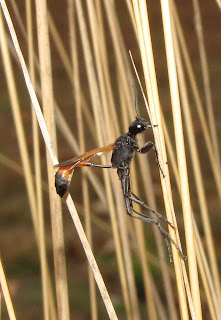 The individual above was imaged in Ocean City, New Jersey, fairly early on an overcast morning (October 19, 2010). It is in the classic “sleeping” posture adopted by Ammophila wasps during the night and inclement weather. The wasps grip a stem with their jaws, and prop their bodies at about a forty-five degree angle with their second and third pairs of legs. They often roost in loose clusters, jockeying for the best locations before settling down. This seems like odd behavior for supposedly solitary wasps. I once found a tight cluster of several Ammophila at Smith Rock State Park in Oregon. I initially thought it was a cluster of seeds or berries drooping from a short, erect plant.

When not resting, a female A. pictipennis is a busy insect. The species usually nests in sand, but will also excavate its shallow, vertical or nearly vertical burrow in hard-baked soil. The shaft is barely longer than the wasp herself, but ends in a nearly perpendicular cell that is spacious enough to accommodate the wasp and a lone caterpillar host. The specimen below was imaged at the Orange Airport in Orange, Massachusetts, September 7, 2009. She had brought a caterpillar to the vicinity of the burrow and was preparing to open it. 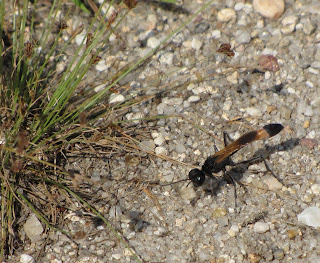 Known host caterpillars used by this species include mostly cutworms like the Armyworm, Mythimna unipucta, the Spotted Cutworm, Xestia c-nigrum, the Yellow-striped Armyworm, Spodoptera ornithogalli, and the Corn Earworm, Helicoverpa zea. There is at least one record of a caterpillar of the Common Sootywing (a skipper), Pholisora Catullus being used as prey. 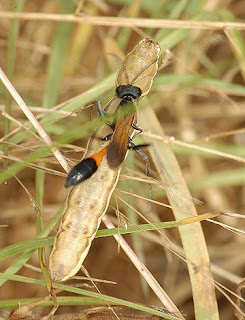 Image above courtesy of Giff Beaton

The nesting behavior of this species is covered in detail by Phil and Nellie Rau in Wasp Studies Afield (Princeton University Press, 1918). Their interpretation of the wasps reveals at times perhaps more about the human observers than the reality of the instinctive processes going on in the insects. Still, it makes captivating reading and creates a real appreciation for the toiling labor of these creatures, as in the process of closing a nest:

”In her next selection she seems to be more particular. She goes here and yonder, pausing at clods and tiny pebbles, sometimes lifting them or turning them over. When finally she finds one that suits her fancy…she brings it in her mandibles and, grasping it firmly, she rubs, pounds and hammers down the dirt on the top of the hole until all traces of the fill are obliterated. When she has finished, we ourselves cannot discern the spot. Her task, so skillfully done, is now at an end; she throws her tool aside a few inches and flits away with an utterly careless air, as if she had forgotten all interest whatsoever in this place – and quite possibly she has. It is interesting to note that she cannot be persuaded to use this tool before the precise time for it. Once we tossed her a tiny pebble while she was yet busy grinding to pieces her clods with a pestle-and-mortar motion, but she only took it, without ado, and laid it back on her rubbish-heap, where an annoying bit of stick and a troublesome cinder had already been placed. Later on, when she was ready for her hammer, she went directly and, to our great delight, got our pebble which she had so stolidly spurned only a few minutes before….”

The image of an ungrateful hymenopteran is at least slightly amusing.

Subsequent research has shown that the “tool use” is simply the culmination of a series of instinctive behaviors. Still, one has to wonder if there was an individual “smart” wasp that increased the survival chances of her offspring by securing the closure of the nest burrow more thoroughly in this manner. Certainly, velvet ants are expert at detecting the subterranean nests of their hosts and digging them open, so such parasites must exert strong evolutionary pressure on the wasps to prevent break-ins.

A little more technical information is available on this page from Discover Life; and once again Dick Walton provides a wonderful online video that highlights the differences in nest excavation between A. pictipennis and A. procera. See if you can make your own observations of these fascinating species. 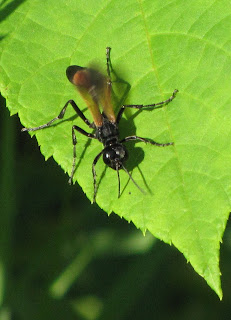