I am declaring November as “Ammophila Month,” with the postings on Wednesdays dedicated to different species of this diverse genus of thread-waisted wasps in the family Sphecidae. There are over sixty species in the genus in North America. We’ll start with one of the most spectacular, Ammophila procera, which I was able to photograph near the lighthouse at Cape May Point State Park in New Jersey.

This is not a small wasp, females at least approaching two inches (25-38 mm according to the Bugguide.net page) in length. It ranges across the entire continent from southern Canada to Guatemala. This is the largest species in the eastern U.S. to sport the silver stripes on the side of the thorax, a hallmark of most members of the genus. 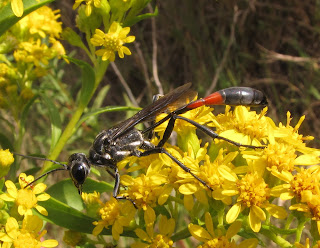 I was able to get very close to this female as she was nectaring on goldenrod blossoms, but that is typical of most species of Ammophila. They are solitary, and shy or gentle in nature. They are quite distracted while feeding on nectar, but otherwise very alert and quick to fly. Nesting females are very persistent, however, and if frightened away from a burrow they are excavating will return most of the time to finish it.

Females of Ammophila procera nest in compact sand, so finding this one at the beach on October 15 was not too surprising. The burrow varies from slanted to vertical and ends in a single cell. Once the burrow is completed, the wasp exits, covering the opening and making an orientation flight so she can find it again. Then, off she goes to find a caterpillar.

She will attack a large caterpillar, stinging it into paralysis and then lugging it back to the nest. She grips the caterpillar with her mandibles and middle legs in a manner that seems to render the prey rigid, allowing her to run in a pretty agile manner, all things considered. She can also fly with the caterpillar oriented beneath her body for maximum aerodynamic efficiency. To see one flying with a caterpillar is quite something. The caterpillar often contrasts greatly in color with the wasp, making for an absurd visual unless you know what is going on. 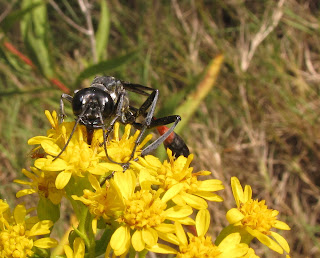 Known host caterpillars for A. procera include caterpillars of the Prominent Moth family Notodontidae such as the White-dotted Prominent Moth, Nadata gibbosa, the Variable Oakleaf Caterpillar, Heterocampa manteo, H. Astarte (no common name), the Morning-glory Prominent, Schizura ipomoeae, members of the genera Datana and Symmerista; and at least one record of the One-eyed Sphinx, Smerinthus cerisyi.

Despite its size and imposing nature, A. procera is not without its own enemies. Among its parasites are “satellite flies” in the family Sarcophagidae, especially Senotainia vigilans and Metopia laterallis. The female flies follow a prey-laden female wasp to her burrow and then look for a chance to lay their own “live” larvae at the mouth of her nest burrow. 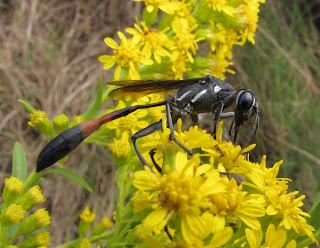 You owe it to yourself to see these wasps in action, and I have just the thing to get you hooked on their amazing biology. Dick Walton has shot some amazing videos of this was which can be seen at his websiteDick Walton Natural History Services. The one for the species discussed even includes the satellite flies! Watch for their cameo appearance about midway through the clip.

Have a great week, friends, and remember to tune in again next Wednesday for another installment of “Ammophila Month.”