I could never have imagined that I would confront another mystery wasp in the middle of December, but there it was: an e-mail from a friend describing what I knew (even in the absence of an image) was a species of wasp that had been recorded only recently in Arizona, and far closer to the Mexican border than in the Sabino Canyon Recreation Area where my friend’s sighting took place.

Fred Heath is an outstanding naturalist, author of the Introduction to Southern California Butterflies, and a member of the Sabino Canyon Volunteer Naturalists. On a visit to the area on Tuesday, December 14, he and others spied a male specimen of Campsomeris ephippium on blooming flowers of Desert Lavender (Hyptis emoryi). Fred didn’t get an image, but this wasp is so conspicuous and distinctive that it didn’t matter. 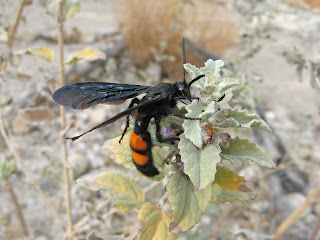 Fred posted a message on the e-mail list for the Sabino Canyon Volunteer Naturalists, sparking David Lazaroff, a founder of the SCVN, to go looking himself, camera in hand. The above image is used with David’s permission, and what a great picture it is. The long antennae, relatively slender body, and “pseudostinger” at the posterior of the abdomen reveal the gender of this specimen. Females, more robust with shorter antennae, have the real deal: a retractable stinger used to subdue the scarab beetle grubs that are the hosts for its larval offspring.

I would not have known what this was had it not been for this image from the spring of 2009. Up until that time, Campsomeris ephippium was known only from south Texas, and south to Ecuador.

Fred Heath and I went back to Sabino Canyon on Sunday, December 19, but failed to find the beast. Ironically, we did manage to spot a few males of the common local species, Campsomeris tolteca. They were hungrily feeding on the nectar of Coreocarpus arizonicus (Little Lemonhead) beside Queen butterflies and Mexican Yellows (also butterflies). 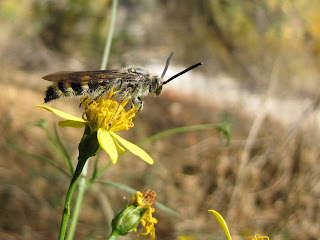 Campsomeris wasps belong to the family Scoliidae, all of which are known parasitoids of scarab beetle grubs. A parasitoid is a parasite that invariably kills its host. Female scoliids, with their heavy, spiny legs, dig up a scarab grub, sting it into brief paralysis, and then lay a single egg on the beetle larva. Then the wasp leaves the scene. The grub eventually regains consciousness and control over its motor skills (such as they are), resuming its underground existence feeding on the roots of plants. Meanwhile, the wasp egg hatches and the wasp larva begins feeding as an external parasite of the beetle grub. 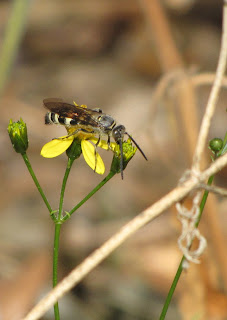 I hope to eventually find more specimens of Campsomeris ephippium, and females of some of our other scoliid species here in Arizona, but I certainly enjoy the pleasure of the hunt regardless of the outcome. Special thanks to Fred Heath for allowing me to join him in the great outdoors. Thanks again to David Lazaroff for use of his fine image. 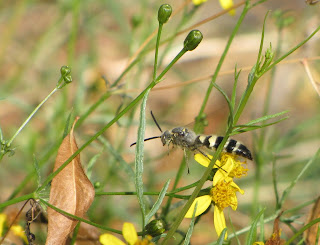